Setting Them Up and Ease of Use

Getting the M-Audio Studiophile AV 40 speaker system set up with my computer was an identical process to the smaller AV20 system except for a couple of small differences. Pulling the speakers out of the box, I immediately noticed that they definitely have some weight to them. They’re also a fair bit larger than the AV 20 system, so if you’re strapped for desk space, these might not be a good fit. They’re not huge, but they’re pretty heavy. You can probably thank the solid MDF construction for that. 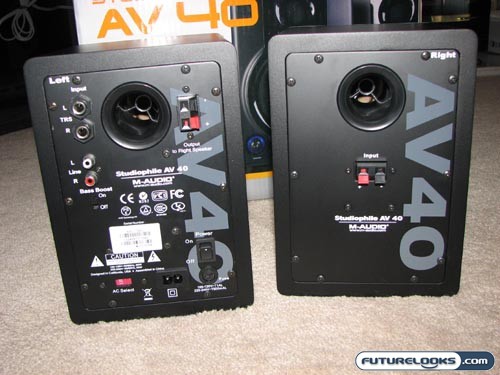 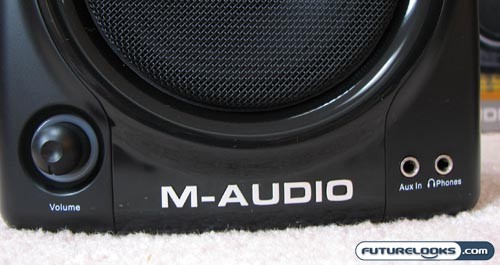 To add to the versatility, you’ll find two small audio jacks on the front of the left speaker. One is to output the sound into a set of headphones, whereas the other is an aux-in port. When you have input coming from both this port and the RCA ports in the back, the speakers output both sound streams simultaneously. I found this to be a little odd, because I expected one of the inputs to take precedence over the other or simply mute.  Karaoke anyone?

Two other switches that I need to mention are the power switch and the bass boost switch. I’m not a fan of the former, because with the smaller AV20, the volume knob also functioned as a power switch when you turned the volume all the way down. With the AV40, you have to turn it off with the switch in the back. I prefer the AV20 for this reason. In regards to bass boost, the difference in thump is definitely noticeable and given my musical preferences, the bass boost is always on. The bass is strong enough that they may rattle. Luckily, M-Audio included some foam pads that you can stick to the bases to reduce the vibrations. 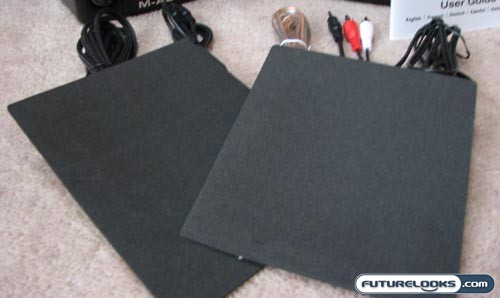 These are only a few millimeters thick and I ended up not using them. They’re not really that necessary unless you’re particularly picky about the sound output. Then again, if you’re even considering the Studiophile AV40, you’re probably a pretty big audiophile to begin with and there are much better sound isolation devices out there. 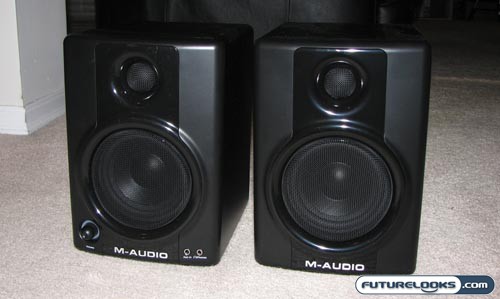 The bass notes were deep and rich and I could crank the volume all the way to the max without getting too much distortion. This is a definite improvement over the smaller Studiophile AV20 system. I wasn’t quite as pleased with the performance of the tweeter as higher notes could get quite shrill, depending on the music that I was listening to. This may be partly because of the output from my computer, but as Studiophile Monitors, they are likely just revealing the flaws of the source material that I was using, which is what monitors tend to do. So in this respect, I guess they are doing what they are designed for.