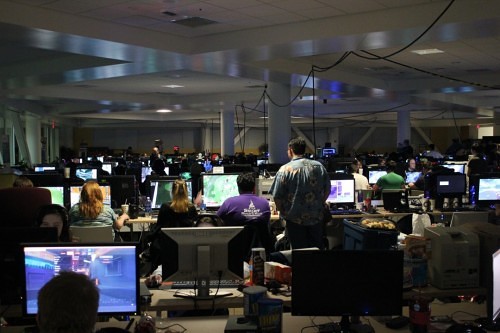 I just read a piece from Polygon about the demise of the beloved LAN party. The writer, Ben Kuchera, makes some good points, that I think, are worth hearing. In a nutshell, he thinks the deck is stacked against the traditional LAN party because of three factors: companies are writing titles for wide area network (WAN) internet play vs local area network (LAN) play, the progression in many games makes it difficult for players of different levels to jump in and play together on even ground, and the demographic that grew up with LAN parties in the traditional sense, is aging, while technology has made it easier for the gamers of today to play together without getting together.

To address the first point, I do think that the gaming industry is definitely making it very difficult for gamers to play LAN the way it was meant to be played for sure. The fact that every game today has to call home, in order to function, is a huge disadvantage to the LAN party way of doing things. Passing around a DVD or USB key, and getting the game to run locally, is a headache. Especially if the connection somehow goes wonky, which has the effect of killing a tournament. While some games like Counter-Strike (CS) up to Global Offensive (CS:GO), have a way to run it in pure LAN mode, the huge AAA titles and popular games from the Battlefield and Call of Duty series, are becoming lost to this way of play.

This segues into the next point about progression. While I have nothing against in game purchases, for more powerful weapons, costumes, or other weird and fun stuff, or recognizing that someone spending a considerable amount of time building up/leveling up their character, it just makes it that much harder for people to really play together. It’s not like the days of Quake or Unreal Tournament, where you can simply jump into the game, no matter who you are, and survive on your skills. Sure, knowing the maps and respawn points is a bonus, but at the end of the day, you’re just as likely to get a rocket in the face as the next guy.

Finally, I do agree that the technology itself, is driving people further away. But there’s a certain level of camaraderie that still exists today, that drives people together at the larger LAN events. One that come to mind include the always sold out PAX and Intel LANfest events. And events like the local (to us) BCIT LAN party, and GottaCon LAN, continue to add numbers year after year. The reasons why people come out to them are evolving though.

The LAN party of today is not just about rows and rows of gamers playing a game. It’s evolved to become a celebration of all gaming, and the things that support it. People show off their new builds, challenge each other to feats of endurance, and there are of course, the opportunities to meet with your favourite companies and talk to them about your favourite products. And then there are the die hard gamers, that will take over a garage or living room, for the weekend.

While a bunch of gamers in one place playing together will always be a LAN party to me, perhaps the term itself is the only thing that has died.

What do you think?