CDM is a tough high compression benchmark on SSDs. It doesn’t hurt the internal components. It simply makes the controller and NAND put their best results forward. The scores are good indicators of what to expect from your system. 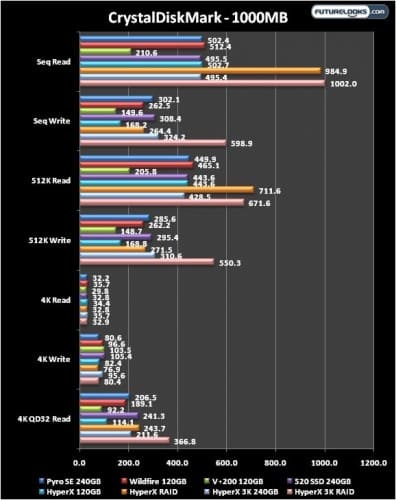 The HyperX 3K matches up pretty well against the synchronous competition. The 3K does well both in single and especially RAID configuration providing higher throughput than its older brother. Oddly, I noticed that the HyperX scores generated by CDM were very sporadic hinting to a possible glitch. That evidence is substantiated by the next two benchmarks. Let’s see how it does in IO performance.

Users often appreciate a IO benchmarking because it gives a good representation of potential real world performance. ATTO is a very popular program for getting those performance numbers pretty much used by every SSD manufacturer. 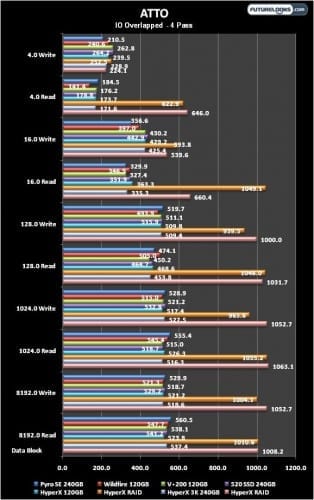 Again, the HyperX 3K provides a bit more IO performance. It’s interesting to see the 4K block test just a bit lower than the HyperX Blue yet redeems itself with the larger IO test sets. In RAID 0, the scores improve even further again. In fact, the scores are noticeably better especially when loaded down with data.

There are still quite a few people unaware how SSDs benefit their computer. Higher data transfer rates, which we just saw, will speed up boot processes, manage especially large programs faster, video games load much quicker and helps feed your processor much needed data for big projects. Here are the results compared to a 1TB hard drive holding the same OS. 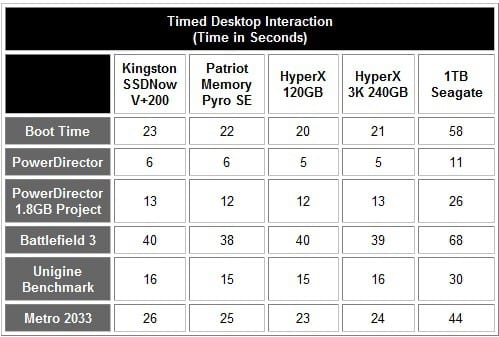 The recorded time results pretty much say it all. It’s important to understand that these recorded times will differ depending on your SATA controller and size of your programs. But you still get the point. If you’re tired of your platter drive’s little pauses due to slow spin up or slowing considerably as you fill it up, or if you’re tired of being the last player to join your favorite game server, grab a HyperX 3K SSD. In a nutshell, you can do more faster and because of recent SSD price drops, cheaper too! 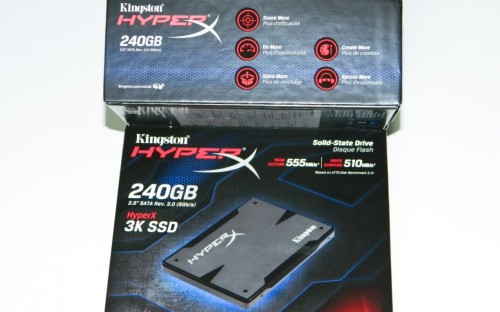 There’s no arguing that the HyperX 3K SSD is a worthy choice amung a market full of options. The 3K NAND and SandForce SF-2281 controller work together well providing a little more speed as well as added endurance. Granted, the question of endurance unfortunately can’t be fully measured even with a few months use. However, some of that endurance and resilience is visible after running repeated tests that start to weigh down the NAND. Like the V+200 Enterprise series, the HyperX 3K manages its resources well and should last for many years.

The Upgrade Bundle without question continues to be the most comprehensive kit for migrating any system over to a Kingston SSD. The Acronis True Image software alone is worth the extra cost which ensures you don’t have to start over from scratch. The cables and hard drive enclosure are just icing on the cake for fast moving pros looking to get their SSD fix.

Purchasing the great looking two-toned HyperX 3K 240GB Upgrade Kit will cost about $329.99 from online retailers. Recent pricing adjustments have moved costs a little downwards as more affordable Micron and Intel NAND volumes continue to grow. In fact, we’ve noticed that a bare 240GB drive can be as low as $289 at some retailers, as of the writing of this review.

Overall, the Kingston HyperX 3K series SSDs offers everything you want and need from an SSD and more. You really do get it all at an even more affordable price point. Definitely an Editors’ Choice calibre product, making the winning streak unbroken thus far.