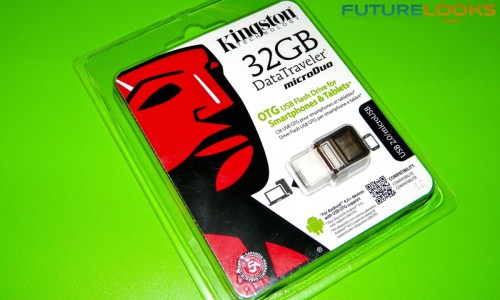 USB flash drives are starting to feel a lot like cheap Christmas ornaments these days. If you’ve seen one, you’ve seen them all. The only important things that separate them are software bundles or their USB speed interface. Suppose you could utilize one for PC and any Android 4.0 smart device? The Kingston 32GB DataTraveler microDUO OTG, which our friends at MEGATechNews highlighted during CES earlier this year, offers this functionality.

I’ve used it both ways the last couple weeks and found that it gives me the option for keeping media files readily on hand without consuming more tablet and smartphone storage. After you have a look, I think you’ll agree it’s time to pick up one of these clever OTG USB flash drives. Given the pricing, maybe you should pick up three! 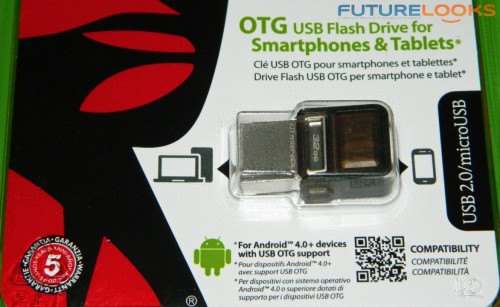 The DataTraveler microDuo currently comes in a USB 2.0 interface. Why? Because, very few Android devices support anything faster. If you need faster, Kingston has other DataTraveler USB 3.0 flash drives for desktop/laptop PC users. Otherwise, the microDUO is primarily aimed at supporting Android smart devices, which is a huge market.

Pricing of the microDUO is extremely affordable. The 8GB starts at around $10, 16GB starts at $14, and 32GB starts around $20 or so. Look around and you’ll find it in this range if not cheaper. If these were USB 3.0 devices, the pricing would no doubt be about double. 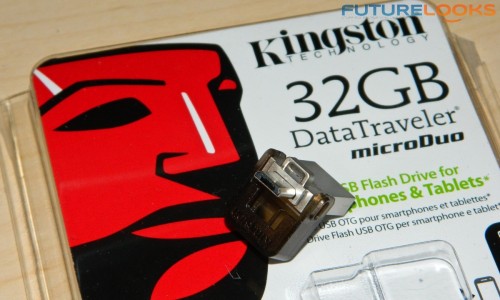 The microDUO deserves a micro quick test suite. Remember, the microDUO has only been lab verified to support Android 4.0 OS or newer and the phone must have a microUSB port, which would include the vast majority of current Android smartphones. I tried many different version Android phones (anything in site) just to clarify its range of support. That said, any Android 2.x to 3.x had no success detecting the device. However, all the newer phones from Samsung, HTC, and LG detect and utilize the USB port. In some cases, it took a little time to detect, but it otherwise functioned properly. 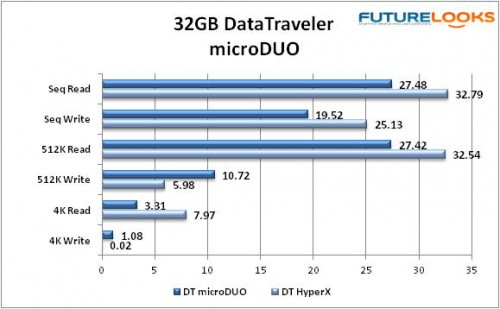 On the desktop PC, the microDUO is very comparable to my favorite HyperX USB 2.0 flash drive. However, it’s much faster in 4K random performance. What does this mean? It means that it was handier with random files like photos, backing up phone apps, and moving music, which consist of a lot of 4K data blocks. It took about 19 seconds to transfer the 1GB file to the microDUO but only 14 seconds to move it back.

The Kingston 32GB DataTraveler microDUO OTG flash drive has become a very handy staple supporting my portable devices, storing extra files so as to not use up resources. Performance is on par for USB 2.0 transfer speeds and it’s great that it works with so many different Android 4.0 and newer devices. However, if you need something a little quicker, internal, and your smart device supports microSD cards, consider something along the lines of a 64GB Class 10 microSDXC card (about $45) instead.

The DataTraveler microDUO is truly micro in size. You will definitely want to attach it to your keychain or phone/tablet cover if at all possible. It’s not something you want to just throw in a pocket. I also wouldn’t mind different color microDUO drives to help categorize my media, as my files easily fill up several 32GB drives. Since I can’t write on them, colors would help.

Ultimately, the microDUO OTG flash drive can help you save a bit of cash given that so many tablet and phone manufacturers attach high premiums to their products when we want more memory and/or internal storage. Instead of shelling out another $50 to $100 for integrated phone storage, the 32GB DataTraveler microDUO only costs about $20. Just a couple of these and you’re set for next trip.