Hooking It All Up 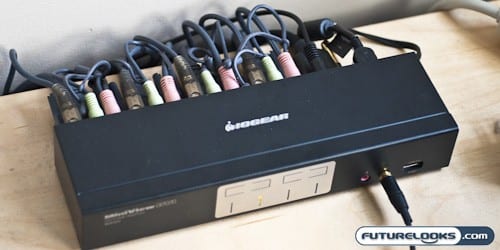 The actual task of plugging in everything was a piece of cake and we were up and running in no time. As you can see, it’s a good thing that the GCS1204 has some weight to it because you don’t want all those heavy cables dragging it off the table. Once power was connected, we were good to go.

There are a few key areas that will form my opinion of the GCS1204. First of all, the switch must work seamlessly with keyboards and mice from any of the operating systems that we have tested and they must provide proper switching support from the keyboard without having to resort to pushing a button on the front of the switch. Also, the switch must work properly with special mousing perhipherals like mice with programmable functions, or alternative mousing devices.

The next two areas that we will have to look at is audio performance and video performance. The KVM switch must not interfere with either and provide an as close to a hooked up directly experience as possible. Fuzzy pictures or noise in the audio are both bad JuJu in my opinion and would go against that seamless system switching experience. Let’s get to work!

I hooked up a PC keyboard for just some basic testing of all the special functions and to test out the switching. As expected, my Saitek Eclipse II keyboard worked just as it does hooked up directly to any of my systems. I even tried out a keyboard that lacked drivers for OSX, the Logitech DiNovo Edge Bluetooth Wireless Keyboard and it worked fine as well, allowing me to Hotkey to the different systems without issue and it seemed to type just fine, though none of the function keys worked due to the lack of drivers. This wasn’t surprising, but I did like the fact that the switch didn’t complain when a wireless keyboard was used.

Switching to the infamous Apple Aluminum Keyboard did cause issues that required me to totally reset the switch and then power it up again with the keyboard attached. Once that was done, I was able to use the keyboard properly including all the function keys. The strange thing was that after I did this, I was able to swap keyboards no problem. Weird, but it gets weirder.

When I was trying to switch between the different systems using the hotkey sequence on the Mac Aluminum, which is tapping the Num Lock button (the Clear Key on the Aluminum Apple Keyboard) twice and then hitting the number of the port (1 – 4) then enter.  The keyboard would not send the right command to the GCS1204. I looked for solutions on the IOGEAR site as well as GOOGLE and it looked like more bad news about this keyboard and a KVM switch to cooperate.

Purely by accident, I enabled the alternate Hotkey Setting Mode, which allowed me to use the CTRL key instead of the Clear/NumLock key. Once this was done, I was able to Hotkey into any system by hitting CTRL twice, the number of the port, then the enter key. Problem solved, but this was not in the manual and wasn’t even in their support FAQ. No wonder people were having issues and yes, IOGEAR, you owe me for this!

My stash of Logitech generic mice didn’t seem to have any problems with this switch whatsoever. No complains on the Mac or PC side of things. I then started getting fancy and introduced the Logitech G9, which is my favourite gaming mouse. Again, no issues with compatibility. I even used the recently reviewed Microsoft X8 Wireless Gaming Mouse and this is where the problems started to happen.

Although the mouse was able to work like a regular mouse without all the function buttons, the rest of the buttons didn’t seem to show up in the Intellipoint Control Panel in both PC or Mac. A quick look in the manual revealed that there was a mode to disable mouse emulation control, and sure enough, after activating it with the hotkeys,  it allowed the software to see the mouse and all the functions started to work after I unplugged and replugged the wireless receiver.

I took it one extra step and tried out the rather unconventional Cyber E Sports Orbita Mouse, which relies on its software quite heavily to make it useful. With the mouse emulation on, the Orbita’s software didn’t know it existed. With the mouse emulation off, the Orbita worked as it should and the software recognized it (including the battery meter). I guess this function is there for non-supported OSes so that you can use the same rodent throughout. However, under both Vista and OSX, it was no problem.