To keep things simple and answer all the performance questions any potential user might have, we used SANDRA Physical Drive Benchmark, Crystal Disk Mark, QuickBench, and ATTO. With the exception of “seek” times, the higher the transfer rates and/or index, the better the drive.

As you will see from here on, there are trade offs to some boot drives based on their controllers. The Kingston 64GB V+ and OCZ 60GB Agility SSDs have controllers tuned for higher higher write speeds rather than read speeds. But, the basic boot drives are tuned for read speeds and lower, steadier write speeds. These boot drives will be just a bit quicker on the boot, hence the coined nick name. They also incidentally have lower price tags, allowing you to install one in tandem with a standard, but much larger, hard drive for the best of both worlds: storage and speed. 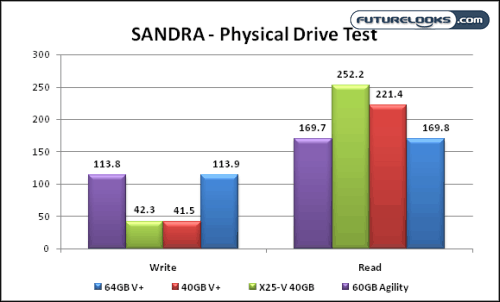 Here, we see the trade off in action between the two 40GB boot drives and two conventionally tuned SSDs. It would appear that Intel X25-V controller is better tuned for read and write performance than the Kingston. That’s roughly 30.8 MB/s quicker read speeds. Translated into the real world, that means that your system will boot faster and your programs will load even quicker.

Crystal Disk Mark (CDM) gives us a more realistic look at the performance you can expect from an SSD. It’s also the reason why we choose to include it as a standard test in many of our other reviews including motherboards. For SSDs, one area of weakness is the small 4KB data block performance so keep an eye on that. 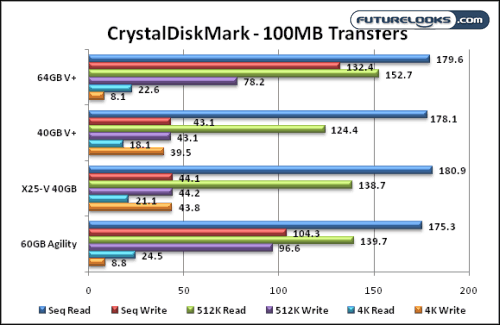 First, take a look at the 100MB performance. This is more indicative of the largest files we manage daily with our systems. 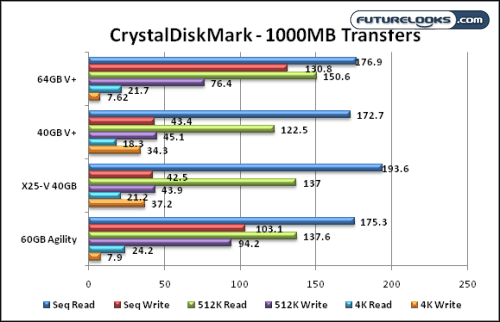 Next, here are the results for the larger file tests. Do you see the 4KB differences between the SSDs? Both 40GB drives basically double the two standard SSD’s 4KB performance which, as you know, makes up the bulk of the operating system’s building blocks. Thus, we get some quick boot performance all around. It’s the Intel SSD that shows the fastest read performance overall

Conceding to the fact that the V+ and Agility offer slower small block and higher large block performance, only the two 40GB SSDs are compared. It’s kind of a Kingston versus Intel SSD, even though they’re essentially the same inside. Their controller tuning is what we’re looking for in terms of block performance. 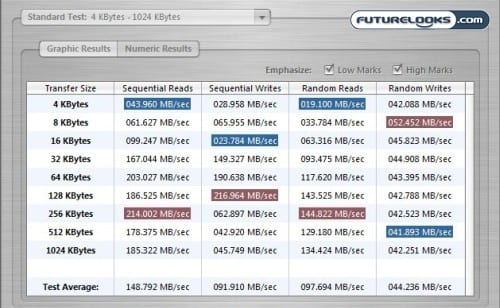 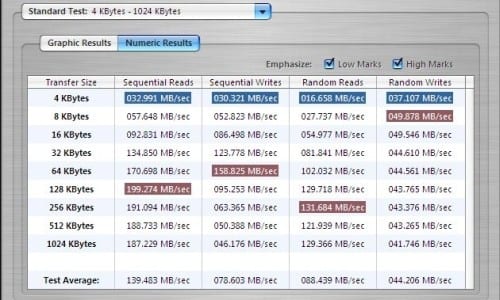 Again, we see the controllers giving us their best performance in the data block tests. The Intel SSD shows some better tuning slightly topping the Kingston SSD. Random rates show us that the controller is pretty much tapped out in this regard. 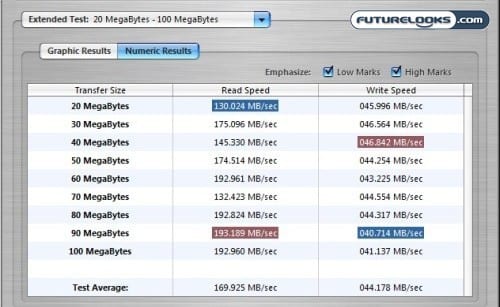 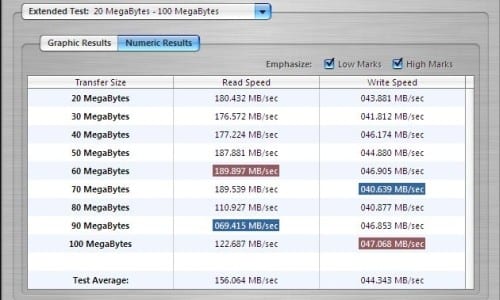 The Intel SSD offers similar sequential performance most likely due to its firmware. We also see that write speeds are locked at about 44 MB/s for both. Obviously, the V+ and Agility drives in previous benchmarks would easily top these two here.