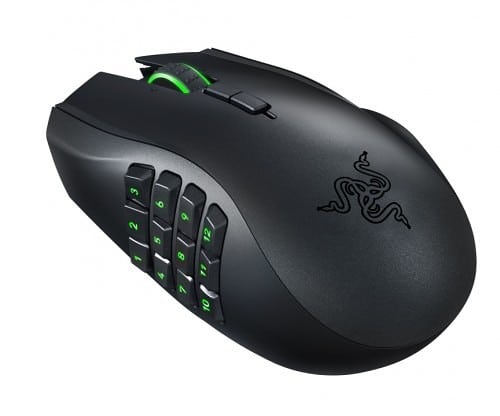 Have you ever wanted something just because it was the biggest, baddest thing in its class? We are all guilty of this at some point in time. We have all built that $10,000+ gaming system wishlist just to see how awesome it would look. Well, Razer has taken that principle to heart when creating the new Naga Epic Chroma MMO gaming mouse.

Epic is the perfect name for this beast as it takes every spec to the extreme. The Naga Epic comes with 19 buttons, 1 Ghz polling rate, a 7 foot cable, 16.8 million LED color selections, works wired and wireless, all with a core laser sensor with up to 8200 DPI and 200 inches per second tracking. If that was not epic enough, it also supports Razer Synapse, which tracks every button press, distance moved, and pressure exerted while gaming, uploading it to the cloud for study to improve your gameplay.

The Razer Naga Epic Chroma will first been seen live at BlizzCon on November 7th, 2014 with an MSRP of $129.99 / 129.99€. If you are in the area, then you want to see this mouse in person. For all the MMO players out there, this is the next level up for you with all your macros at your fingertips and nothing holding you back from destroying your best friend in PvP.

The Razer Naga Epic Chroma showcases the new Chroma lighting on its tilt-click scroll wheel and mechanical thumb grid, a feature that allows personal color customization through Razer Synapse. This one-size-fits-all ergonomic MMO gaming mouse offers a total of 19 buttons with 12 mechanical buttons situated on the iconic Razer Naga’s thumb grid. It is outfitted with an 8200 DPI 4G laser sensor that captures up to 200 inches per second and offers a maximum acceleration of 50 G, and also features both a wireless and wired mode with 1,000 Hz Ultrapolling and a 7-foot, lightweight, braided fiber cable.

Razer’s latest gaming mouse also supports Razer Synapse: Stats & Heatmaps, the newly updated beta software for Razer’s cloud-based driver that provides technical tracking data such as game time, button presses, distance moved, how much overall pressure was exerted while gaming, and more. This data can be especially useful to users of the Razer Naga Epic Chroma in helping them tweak their gameplay, increasing personal accuracy and reaction times and improving their play settings and interfaces.

“The new Naga Epic Chroma gives MMO gamers more freedom than ever before,” says Min-Liang Tan, Razer co-founder and CEO. “We’ve combined the comfortable features of the Naga with even more state-of-the-art gaming features, along with the new, fully-customizable Chroma color features. The 12 mechanical thumb grid buttons enable players to maximize their gameplay capabilities and to get the unfair advantage. All in all the Razer Naga Epic Chroma is now even more personal than it already was.”

The Razer Naga Epic Chroma will make its very first public appearance at BlizzCon in Anaheim, California on Nov. 7, 2014.

Razer announced the Razer Chroma series during this year’s Gamescom in Cologne, Germany. The Naga Epic Chroma joins the BlackWidow Chroma, Kraken 7.1 Chroma and DeathAdder Chroma, all with the option of 16.8 million customizable colors and a range of effects enabled through Razer Synapse. Synapse allows the devices to sync lighting colors and patterns between Chroma devices with the click of a button.

Razer Chroma will also offer an open SDK that enables game developers to integrate advanced lighting effects based on in-game events such as a base being under attack, flash bang effects and much more.