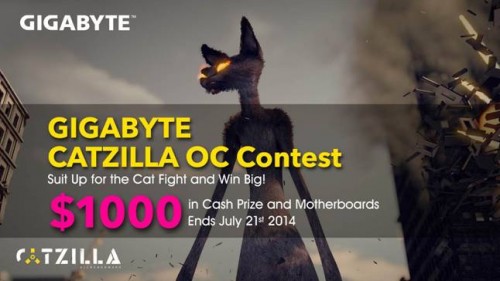 We normally do not condone animal fighting, but we are going to make an exception this time, because the animal is Catzilla and not real. What is real is GIGABYTE giving away $1000 in cash ($500 for winners in each category), so it’s time to get over to HWBOT.ORG if you are not already a member.

Open to all members of HWBOT.ORG, the competition gets you to enter your best scores on the new Catzilla 720p custom skinned benchmarking software. There are a few rules to keep in mind though. First it has to be on a GIGABYTE 9 Series motherboard. Second, you have to include the Catzilla wallpaper on your desktop score confirmation submissions. Third, you have to include a picture of the system used. There will be two groups for air/water and LN2 cooling.

It’s time for all of the GIGABYTE fans to show what they can really do. So top off those liquid cooling systems, turn the AC as low as you can, and push your system to the edge. $500 may not seem like much until you remember Steam Summer Sales and all those new goodies coming out after Computex 2014. More details and exact rules below.

GIGABYTE CATZILLA OC Contest to be Hosted on HWBOT.ORG

June 23rd, 2014 – GIGABYTE TECHNOLOGY Co. Ltd., a leading manufacturer of motherboards and graphics cards, today announced its latest overclocking contest hosted on HWBOT.org, the GIGABYTE CATZILLA OC Contest. The main focus will be centered on the latest GIGABYTE 9 series motherboards with two stages running the CATZILLA benchmark on air/water cooling and LN2 cooling. A $500 cash prize and a GIGABYTE motherboard will be offered to the winner of each stages. An additional raffle will take place on each Friday for the opportunity to win a GIGABYTE T-Shirt.

To celebrate its new custom-made skin on the Catzilla 720P benchmark, GIGABYTE is inviting the overclocking community to participate in GIGABYTE CATZILLA OC Contest. Open to all HWBOT members from June 23rd 2014 until July 21st 2014, GIGABYTE invites all Overclockers to suit up for one epic cat fight and take on the following stages using any hardware platform on a 9 Series GIGABYTE motherboard.

Note: Please register to unlock the 720P benchmark for free.

Make sure not to miss Catzilla’s summer sale. You have until July 1st to enjoy a 50% discount on their Catzilla Advanced benchmark.