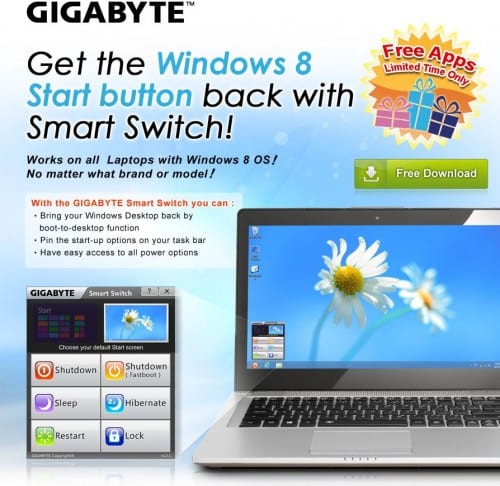 Did you buy a Windows 8 machine? Or did you upgrade an existing machine or install it new on your latest DIY build? I’m sure a lot of you were thought about two things when you first booted up: How do I boot into the desktop, skipping this “Metro” apps stuff and where the heck did my Start Button go? Well, GIGABYTE has given users a gift this week with the unveiling of their new Smart Switch app, which works on any system, desktop or mobile, and lets Windows 8 boot to desktop and more.

While it’s pretty clear that most folks agree that ditching the Windows Start Button in Windows 8 was one of the stupidest decisions the company has ever made, the operating itself is pretty slick and has some really great performance features. But a lot of users were really bummed when they also found out that there was no way to boot directly into the OS without taking a look at the Windows 8 tiles interface along the way. What was more infuriating was the fact that you couldn’t get your start button back and gain access to a more traditional Windows app launch or system shut down experience.

Although there seems to be definite plans in play in Redmond for bringing back the Start Button in the new Windows “Blue” 8.1 revision, most users have had to resort to going with third party applications (some free, some paid) or hacks to accomplish this. So it’s great that GIGABYTE could pass along this little gift to its user base free of charge, for a limited time. It doesn’t completely solve the issue of the missing traditional Windows Start Menu experience, but it does let you skip past that not so great for desktop experience and get to the desktop with ease, free of charge.

You can download the new GIGABYTE Smart Switch software from this page.