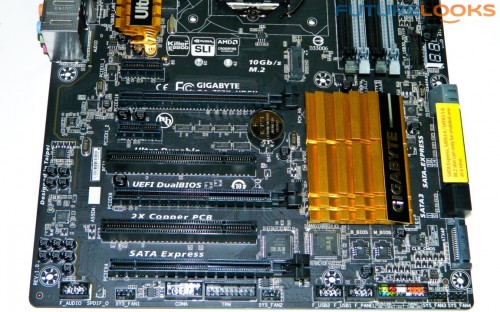 The GIGABYTE GA-Z97X-UD5H supports 2-way NVIDIA SLI and 3-way AMD CrossFireX, which is inline with the board’s price point. USB, audio, TPM, and front panel headers line the bottom of the board. The bottom left of the board holds the black capacitors GIGABYTE added to clean up the integrated Realtek ALC1150 audio. There is also a rear amplifier as opposed to a front. Given the number of users that prefer the rear audio connectivity, it’s a good idea to have both.

To date, GIGABYTE’s original Z87 series offered one of the best audi0 performances, and it looks like the Z97 series looks to be right on par again.

IO Connectivity – Is There Enough? 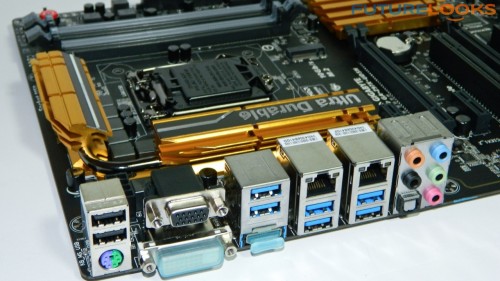 The back of the board offers 8 USB ports: 6 blue USB 3.0 ports, and 2 black USB 2.0 ports. The board has dual gigabit Killer NICs, though they are not the same as the ones on the G1.Killer series. Still, they’re plenty capable and work with bundled software to help shape traffic for gaming. The video connectivity includes a VGA port, DVI port, and an HDMI port. We haven’t seen a VGA monitor in many years now so I think it would be perfectly safe to eliminate this port and replace it with something more useful, like perhaps a Displayport. 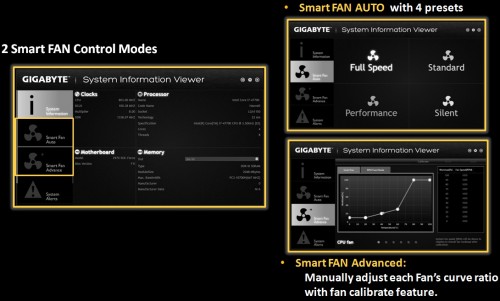 The App Center gets some tweaks to clean up installation and make it easier to add new tools to the utility. While the DVD comes with options to install everything all at once or select just what you need, we aren’t sure what will be offered on the support website. Either way, the App Center features a lot of tools for managing fans, power consumption, and system tweaking through Easy Tune. It is a huge improvement over GIGABYTE’s efforts, prior to the Z87 series.

Continuing on, Easy Tune contains so many more options than ever for tweaking memory timings, voltages, power consumption, and offers pre-programmed overclocking settings. Simply select the option you want and the board’s resilient UEFI BIOS will apply all the settings at restart. Users with Haswell K series processors can expect very similar results. We still aren’t able to give you any numbers with any upcoming processors but we will soon as we get them. 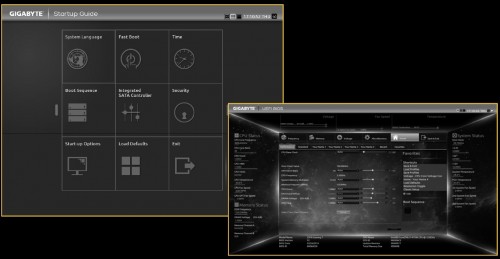 The GIGABYTE GA-Z97X-UD5H’s stability depends on the UEFI BIOS. It’s more detailed and categorized than ever. It’s easier to navigate, and simpler to figure out. As for overclocking options, the GA-Z97X-UD5H has plenty of VREG to support a hefty, nuclear level overclock. There are presets that thus far have worked with extremely good CPU cooling. Therein lies the best method for overclocking success. 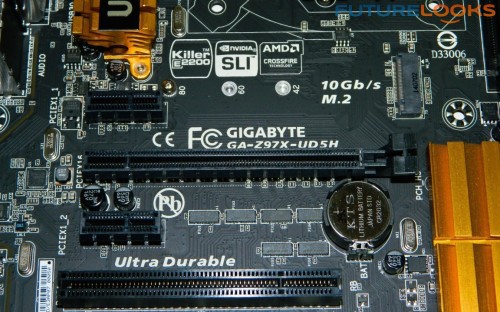 The GIGABYTE GA-Z97X-UD5H may seem like a simple refresh, but the SATA Express feature gives it some legs to manage storage faster and more efficiently than ever. It also supports Intel next Generation processors, which are just around the corner. Granted, the Z97 does its best work with the latest upcoming high performance SSDs coming down the pipe, but it still supports existing ones perfectly, maximizing their potential. Thus far, the M.2 mSATA slot has been more handy than ever. Adding a 480GB mSATA SSD gives me the freedom to load up the SATA ports with other things. We’ll be ready very soon to reveal our findings.

For anyone interested in other models, GIGABYTE will be offering updates to many of your Z87 series favourites. These include a new GIGABYTE Z97X-SOC Force, UD5H-BK Black Edition, and Z97X-GAMING G1 Killer with and without Wi-Fi. We expect pricing to be very similar to the Z87 line when they first launched. Stay tuned and we’ll bring you benchmarks as well as the latest news as it becomes available.

What do you of GIGABYTE’s new board so far?