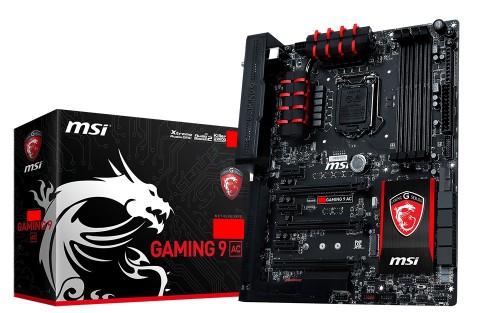 Earlier today, we received a “leak” detailing features of MSI’s new gaming series motherboards. Now this wouldn’t normally be a big deal because motherboard companies rename stuff all the time. However, what is significant about this information is that the “leak” details the naming scheme of motherboards based on the next generation Intel chipset, which is due to succeed the Z87 platform, later this year.

The note claims that MSI’s new Gaming Series motherboards will prominently feature Intel’s latest platform in three new boards: GAMING 3, GAMING 5 and GAMING 7. But the photos paint a different story as what we see are FIVE new boards. There’s a GAMING, which is a mini-ITX board, a GAMING 3, which is a more entry level solution, a GAMING 5, which is a bit more full featured, then a GAMING 7, which seems to take things up a bit further. Then finally, at the very top, there’s the GAMING 9AC (pictured above) which features all the bells and whistles.

All the boards feature the red and black color scheme that they first started using in their previous line of GAMING series of boards. The new boards will also feature MSI USB Audio Power, which cleans up the power being supplied to devices like USB audio devices (like headphones and sound cards) and Audio Boost 2 (featuring Creative Labs) that takes onboard audio up a notch. Other non-hardware features include even more cosmetic tweaks like a fully blacked out I/O panel cover and a 6 month premium subscription to XSplit.

I wish there was more to report in terms of new hardware features (or even pricing and availability), but that’s the nature of these “leaks”. We did spot an M.2 slot though which should allow the new boards to support the new and faster SSDs (and other hardware) coming out in that format. The MSI line up does look to be tastefully designed and it appears gamers will be their focus with Intel’s next generation platform.

More photos of the line up including the “leaked” memo are below.

We’re looking forward to more “leaks” from other companies during the run up to the next generation Intel platform launch.

MSI are revealing upcoming line of “GAMING” mainboards, designed primarily for enthusiast gamers seeking to get the very most from their hardware to software. They are coming in three distinct flavors: GAMING 3, GAMING 5 and GAMING 7.

For our next generation of GAMING motherboards we spend a lot of attention to small details. They will come with a complete black I/O panel without the shiny silver edge you are used to.

Show off your GAMING skills to the world with XSplit Gamecaster and MSI. Get a 6 month premium license for free with our upcoming next generation GAMING mainboards.

Our new Audio Boost 2 solution is powered by Creative Sound Blaster Cinema 2 and comes with many new features. The in-game sound has never been as good as before.