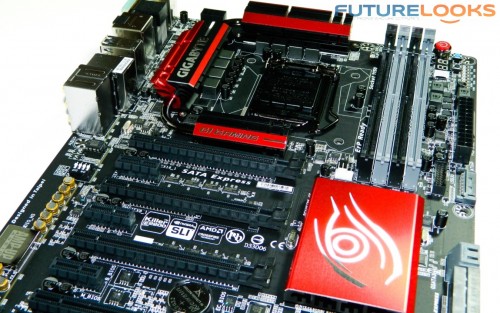 The GIGABYTE GA-Z97X Gaming GT doesn’t quite boast the same amazing military grade look as the previous Sniper 5. Instead of green and black, gamers get red and black which honestly works better with many of today’s enthusiast memory, video cards, CPU coolers, and liquid cooling systems. While clean and confident, it may not win any OMFG first impression awards. But it does address one of the downsides of the previous military motif, which is alienation of gamers that may be more mainstream, and play games like League of Legends or DOTA2, rather than BF4 and Crysis 3.

The DIMM slot area offers power, reset, and CMOS clear buttons. I personally don’t like my CMOS clear button so close to the others. It has been a little too easy accidentally hitting the button while reaching for other things. Still, they’re handy if you have a really cool abstract aftermarket computer case. 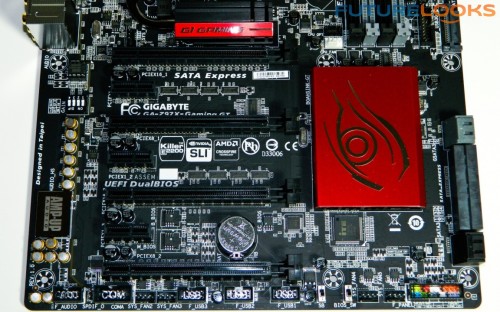 As mentioned earlier, not found on this platform is an M.2 SATA Express 10Gb/s port, which seems standard on everyone else’s board. That’s okay since gamers would rather spend money on audio, graphics, connectivity, and overclocking stability, rather than invest in another alternate SSD format.

To offer higher throughput though, GIGABYTE has included SATA Express ports for those newly released high performance SSDs. But it’s still backwards compatible with previous generations of SATA based SSDs, so you aren’t losing any ports, with the right adapters. 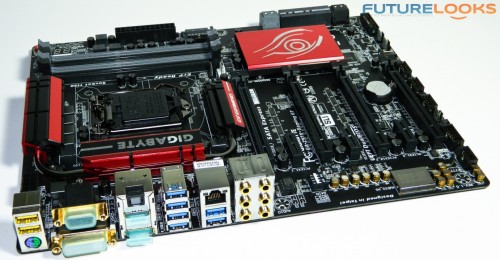 Starting from left to right on our GIGABYTE GA-Z97X Gaming GT board, the two yellow USB 2.0 ports are the USB-DAC which can help clean up audio for external USB audio devices such as headsets and outboard audio devices that draw power/data from USB. This of course bypasses the great audio onboard, but it is in keeping with the brand dedication to best possible audio. Below that is a PS2 port for those of use that don’t want to let go of the past. There are also six USB 3.0 ports which will come in handy for high bandwidth devices like storage devices.

For onboard graphics, there are also VGA, DVI, HDMI, and Displaylink ports. The VGA port still looks strange in this day and age, but it’s also worth noting that VGA is still dominant in many markets, so there is a purpose for it. But of course, less so on a board that will likely see usage in conjunction with a discrete audio solution.

Finally, there are six marked gold colored analog audio out ports. The optical out port is above the HDMI/Displaylink ports. Useful for connecting your gaming PC to your home theatre system for big screen gaming. 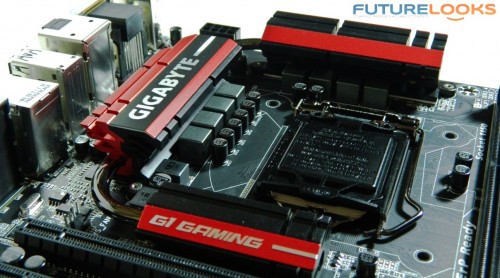 The test system components were assembled and configured as follows. The latest drivers and BIOS (at the time of writing) were installed and updated for testing.

Installation went off without any real glitches or obstacles. All of the onboard USB, audio, IO, and SATA ports worked perfectly. Keep in mind that sometimes Windows won’t properly detect every device, so a quick reboot most often cures that.

All testing was done on a freshly loaded Windows 7 Ultimate 64 bit OS with all the patches. 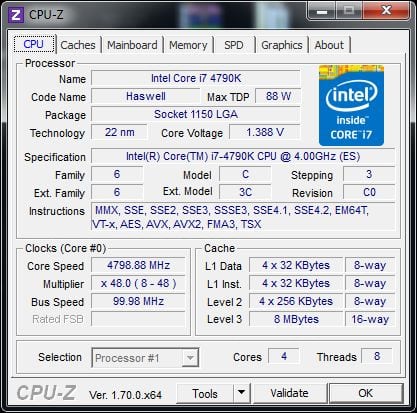 Devil’s Canyon overclocking is limited by heat more so than any processor in the last five years. Sure, it idles quite cool but under load it’s about 10 C hotter – thus under overclocked frequencies, the tempereatures are even higher. Intel recommends 80C as the top allowable operating temp. That said, our Devil’s Canyon chip hits 80C very quickly at 4.8 GHz using 1.35 to 1.38 volts. The max DDR3 frequency reachable was 2600MHz which isn’t bad at all.

Does that performance improve gaming? Well, the games load quicker but it only helps certain games. Does it improve a task like transcoding or video encoding? Sure, it does but not by much because the CPU turbos to 4.4 GHz so 4.8 GHz isn’t exactly an earth shattering overclock. Respectively, the free to download GraySky H.264 5.0 benchmark increased from 81.2 to 84.5 frames 1st pass and 18.6 to 20.2. That’s not much of a boost but it is something.

Let’s look at the BIOS that makes this possible.