As our trend of improving motherboard reviews continues, I selected some benchmarks that are more congruent with platform testing. Granted, motherboards impact every performance characteristic but some benchmarks depend more on each individual component. We’ll start with some of the more interesting ones.

Consumption wasn’t any higher than the GA-Z87X-UD5H or ASUS Z87 Deluxe  boards at idle or under regular load. However, the Force does get a little thirsty when I started overclocking. Voltage droop and stability were not a problem even during overclocking.

The only instability encountered was due to pushing the 2800MHz DDR3 as well as the Core i7-4770K a bit too far. Heat continues to be the biggest challenge for keeping Haswell cool enough to reach a stable non-nuclear 5GHz. I suggest pairing the OC Force up with a high quality 80Plus Gold or Platinum efficient power supply for best results. 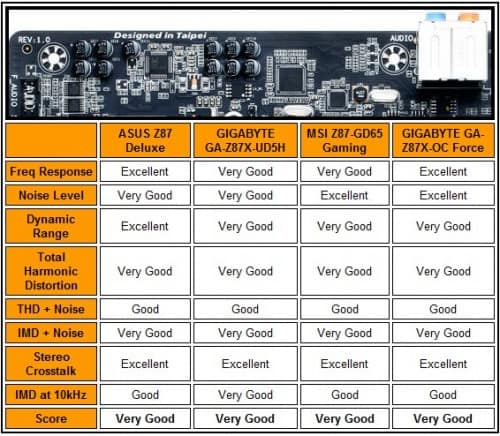 Thanks to GIGABYTE adding more capacitors that ensure clearer, sustained frequencies, decent quality audio production just doesn’t seem to be a problem. After several tests, I found a similar experience to the GA-Z87X-UD5H.

Audio frequencies rise and fall more nimbly. The volume isn’t as loud as some of the Creative hybrid integrated audio codecs but it also doesn’t suffer from stereo cross talk which is evidence of the better implementation in the Z87 series. One plus I noticed is that the front panel audio sounds more amplified (thanks to an onboard headphone amp) which is good news for music fiends or video gamers who like the thunder of a winning blow. 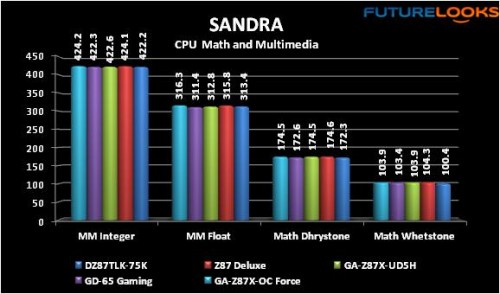 BIOS tuning appears to give the Z87 Deluxe and OC Force a slightly better benchmark result. Honestly, it’s just pennies so to speak but it does show that extra tuning can make a difference.

I had to rerun many of the boards with the latest drivers and same GIGABYTE GTX 770 OC because it greatly influenced the scores. For a little overclocking comparison, I’ve included the results from a meager 4.5GHz overclock with Turbo still enabled. 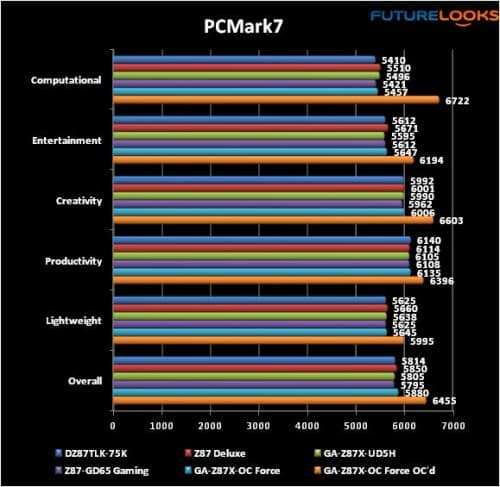 Here, the OC Force stands just as tall as the rest. However, after several passes, the scores were just a bit higher no doubt thanks to the BIOS tuning and better quality components. As you can see, when overclocked to a perfectly stable, yet thermal friendly, 4.5GHz, the scores increase immensely. If you’re looking for 24-7 perfection without the worry of heat or crashing, this is your optimal window. 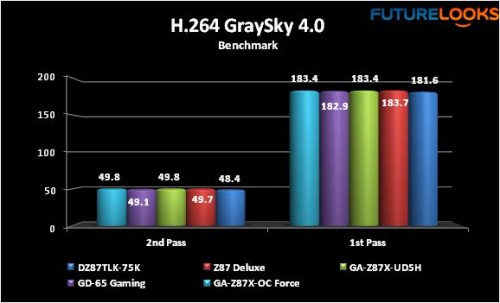 Video transcoding again shows more of the BIOS differences in regards to CPU tuning. It’s very close between the GIGABYTE Z87X-UD5H and the ASUS Z87 Deluxe. If you’re wondering, the 4.5GHz overclock pushed the 1st pass score to 215 and 2nd pass score to 56. That will shave off a considerable amount of time if you have a 1080p video that needs to be converted to other formats or resolutions.

Just a few more benchmarks and hardware tests on the next page and we’ll be taking it home to a conclusion!