Search
Home
Reviews
Prev6 of 8Next

Starting with USB 3.0, we check in to see if any differences exist in the implementation of the Japanese made NEC chip used to power the USB 3.0 on both boards. Since we found out in our 890GX article that there can be a difference in performance even when using the same chip, we thought we’d double check. 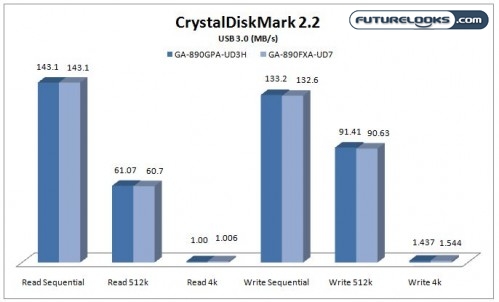 As we can see, the differences are very minor as shown by the benchmarks. There’s basically no difference between the implementation of the NEC chips in both boards. Let’s see if that holds true with the SATA 3.0 benchmarks.

Since both of our boards use the same SB850 southbridge, we expect differences to relatively minor, if any. Let’s see if we’re right. 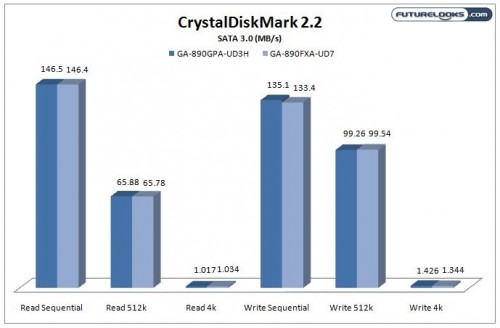 Based on the benchmarks, we can see that the SB850 on both boards perform nearly identically even when mated to two different chipsets. This isn’t hard to believe considering both boards use the exact same southbridge.

We ran the standard networking benchmark in SiSoftware SANDRA to see if any differences exist in the single port networking performance of the two boards. 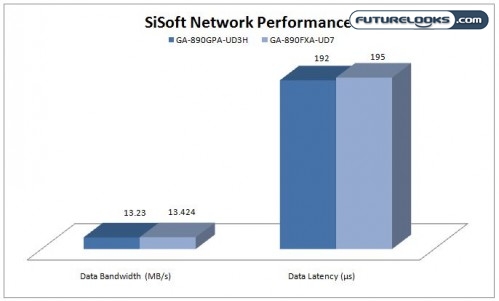 In single port networking performance between the two boards, we see that performance does not vary significantly. This is not surprising considering that both boards use the same Realtek RL8111D Gigabit ethernet solution. Keep in mind though that GIGABYTE’s 890FX implementation specifies two of these chips and dual Gigabit ethernet ports which not only gives it the ability to switch from a dead port to a good port, even with one cable plugged in (Dual SmartLAN) but you can also team them up to double your bandwidth.

Next, we check out the analog audio performance of these two motherboards. The GA-890FXA-UD7 sports an Realtek ALC889 chipset while the GA-890GPA-UD3H sports the Realtek ALC892. Let’s see which audio solution comes out on top.

The GA-890GPA-UD3H (top) manages to grab a “good” performance overall, but scores poor in the THD + Noise category with a lot of average scores. The GA-890FX-UD7 on the other hand gives us a “very good” overall performance with an excellent stereo crosstalk rating, with no poor areas. While the ALC892 is said to be the successor to the ALC889, due to its support for higher quality formats like DTS-HD, it clearly doesn’t show it in our benchmarks.

However, both solutions did pass the headphone test when hooked up to my head and a pair of SONY MDR-7506 Studio Monitors. It was difficult to impossible to distinguish between the two solutions in listening tests. Clearly, implementation is just as important as the chip used and the allegedly lower end chip was implemented just a little better on the higher end 890FX board.

Now that all the benchmarks are out of the way, let’s look at things like power consumption, overclocking and all that other extra fun stuff.