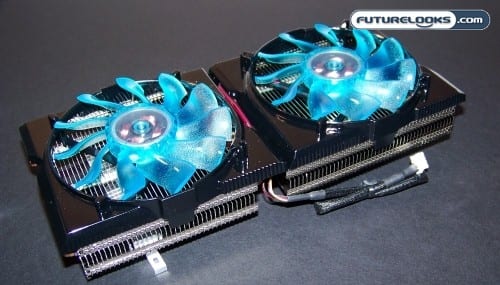 At Computex 2010, GELID Solutions launched their latest GPU cooler called the ICY Vision. The GPU cooler is aimed directly at the latest graphics processors from ATI and NVidia. And, since the latest GPUs produce a lot of heat, we’re anxious to give it a shot. We’re going to put it on the world’s hottest GPU (literally), NVidia’s Fermi GTX480 to see how it performs and see if it’s able to accomplish what NVidia’s reference cooler can’t. 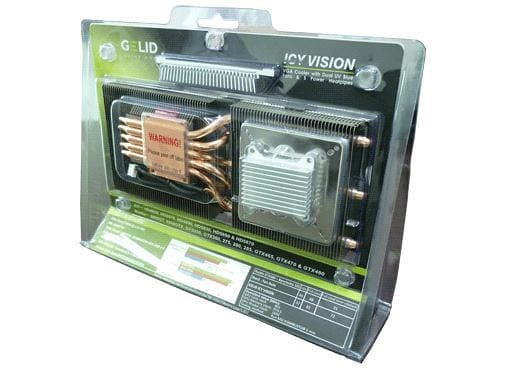 Currently, the GPUS support by the GELID Solutions ICY Vision include…

Something to keep in mind is whether or not the video card you are cooling has a reference cooler or not. Some non-reference cards may sport a modified layout as well and may not work properly with a cooler engineered for the stock mounting locations. As long as the GPU location hasn’t been modified too much, this cooler should install properly with perhaps only the memory modules giving you some troubles. Keep in mind, this is the case with any aftermarket GPU cooler and not just isolated to the ICY Vision.

The GELID Solutions ICY Vision GPU Cooler launches this week and should be hitting the store shelves for UNDER $55 US MSRP. 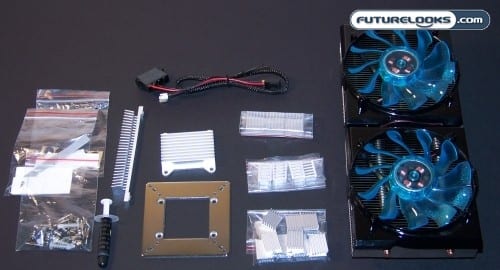 Well, what you see through the plastic packaging is pretty much it. Besides the ICY Vision cooler itself, there’s plenty of tiny little thermal pads, thermal tape, and screws that are to be used to install the cooler.

Also included are many aluminum heat sinks. There are sinks for the video ram, powering MOSFETs, secondary ICs (ATI cards), and what appears to be some for CHOKEs. Basically, there’s a heat sink for every and any component that can get hot. Thermal tape is provided to allow you to stick these wherever you need to beat the heat. 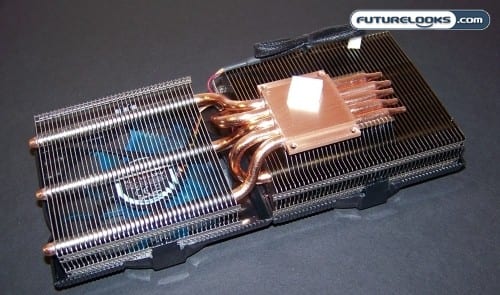 Like many of today’s performance coolers, the ICY Visions relies on its copper heat pipe design as well as the pipe’s special contents, if any. The pipes are pretty well polished and have very clean ends. There are no soldered joints at all even where the pipes pass through the aluminum fins which results in a clean appearance overall. Speaking of fins, you can see that they’re very straight. Each fin attaches pretty solidly to the next all the way down the line.

Moving to the base, we noticed that it’s not perfectly polished. However, it’s smooth enough that any ridges can’t be detected while sliding a your finger nail across it. The best time to polish a base is when it’s cooling a very, very hot surface. This is probably one of the very few GPUs that would benefit from a little extra finish quality.

A very useful feature is that the two 92mm fan shrouds are removable, or looking for a better word, adjustable. One could slide the fans either direction to better aim the fans towards hot spots. Or, if you really want to get creative, you could add your own after market fans.