The Test Rig and the Tests

As I’ve noted, these two compounds are being compared against the industry standard Arctic Silver 5 found in most enthusiast systems. We tested each thermal compound using the following system…

My cooler of choice for testing was actually the stock AMD CPU cooler that comes with most retail packaged processors. These coolers are engineered to provide an adequate amount of cooling required for most normal usage situations. This also allowed me to concentrate on the performance of the different thermal compounds rather than the performance of the heatsink. The CPU is also important and we chose the 140W TDP AMD Phenom II X4 965 to push the compounds to their limits.

To place stress on the CPU, I used OCCT to place 100% load on all four cores for an hour. That was of course after letting everything idle for 30 minutes to get the idle temperature. 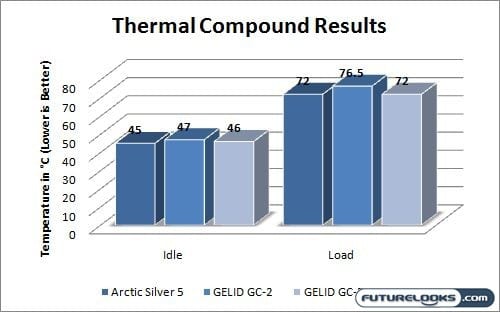 The results produced were actually in line with what I was expecting when taking into account price point and value of each GELID product. The GC-2 compound was only within 2°C of the Arctic Silver 5 compound at idle, but once stress was placed on the CPU temperatures jumped up rather quickly. They peaked near the temperature threshold of the CPU, and held out for the rest of the test without any drop in the CPU speed from throttling.

As for the GC-Extreme, its performance was nearly identical to the Arctic Silver 5 paste. There was 1°C difference in favour of the AS5, but that is statistically insignificant. Once under load the GC-Extreme actually took a lot longer than the AS5 to hit its peak, with it finally topping out at about the 45 minute mark. The AS5 compound had peaked at the 30 minute mark, and held from there. 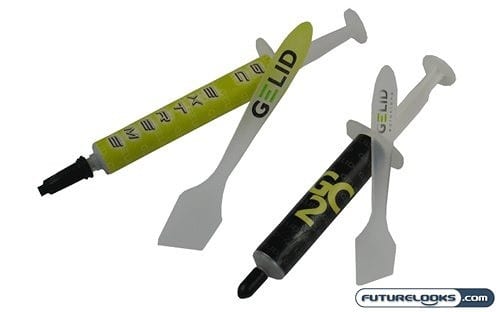 I had mentioned the sophomore jynx on the previous page as something that can afflict artists and athletes alike. It also tends to hit young companies in the throws of a great initial release. The GC-1 compound was just that. It performed better and cost less than the well known Arctic Silver product at the time. I would say that GELID has at least managed to hold their own with their second thermal compound release, and enter another market in the process.

In the end we really have two great products here, which are aimed at two different usage profiles. The GC-2 compound is a great value. Even though it couldn’t best the Arctic Silver, nor its GC-Extreme brother as expected, it really doesn’t have to.

Taking into account the price per gram and the temperatures posted, the GC-2 compound is clearly the definitive replacement for the bargain basement crap thermal grease that comes installed on most CPUs and chipsets. As for the GC-Extreme compound, it matches AS5 pound for pound in performance while beating it in price making it too, a great value and a great performer.