There’s a war on the horizon, and the battle is only just beginning. On October 25th Battlefield 3 hits the shelves (or your Origin app, if you’ve adopted EA’s new Steam rival) and exactly two weeks later so does the latest instalment in the Call of Duty series. Take one look at the release trailer videos for either Battlefield 3 or Modern Warfare 3 and you’ll see that the fight is being taken to the streets- or perhaps just YouTube comments – because fanboys on each side are declaring the winner already. Lucky for you we’re here to show you why Battlefield 3 means so much for PC gamers and why it’s the title of choice this fall.

The last few years have belonged to the Call of Duty franchise. With the rise of consoles and alleged decline in PC gaming, it certainly seems like a challenge to win back the PC crowd. Thankfully Electronic Arts’ DICE, developer of every Battlefield game in history, are not new to challenges. In fact, they’ve been around for over ten years, and have produced at least six hit titles in the franchise along with numerous expansions and even free-to-play additions.

Unlike the turbulent history that Activision has had with various Call of Duty developers (including a complete disbanding of Infinity Ward, the developer responsible for the fantastic Call of Duty 4), DICE are a tight crew – most of the lead designers and architects are still with the company from Battlefield 1942 days. And they’ve all been hard at work – the Frostbite 2 engine behind Battlefield 3 has been in development for at least three years, and boy does it show!

This engine takes high-octane only 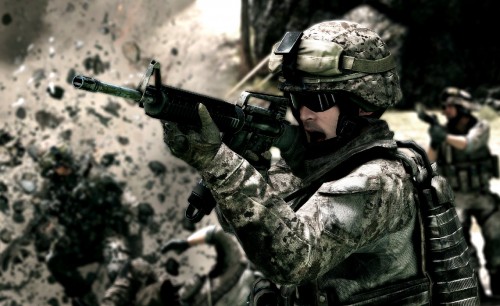 What can you expect from a completely new engine designed from the ground up as a PC-centred platform for 64-player awesomeness? Destructive environments, HDR lighting, advanced particle effects, revamped physics and efficiently programmed rendering are all on the list. Taking a look at the various gameplay videos or experiencing the beta for yourself shows that this game is severely blurring the line between reality and what you see on your monitor – throw 3D in to the mix and you may not believe that you’re still at home.

Anyone who remembers what Battlefield 2 was like for pushing the limits of your graphics card will be familiar with what BF3 is bringing to the table. Hit up your favourite computer retailer for some upgrades because new engines come with new requirements. In fact, using Steam’s surveys as a metric, EA has declared that almost 90% of gamers out there don’t meet the recommended requirements for the game. The game is calling for at least an Nvidia GTX570 or ATI 6950 for a GPU and an INTEL or AMD quad core CPU for the best possible gameplay experience.

Throughout its history the Battlefield franchise has been all about multiplayer. In fact, BF 1942 or BF2 didn’t even have a single player campaign to speak of. That still didn’t stop millions of gamers from playing those titles for countless hours – who hasn’t ridden the wings of a bomber in El-Alamein, or driven at top speed in to Karkand only to find out that someone has placed a C4 pack in just the right spot?

The multiplayer experience is largely the same as BF2, and there’s no reason why it shouldn’t be. With a few changes to character classes and weapons, as well as some much needed vehicle tweaks (jets and helicopters are a bit more realistic when flown, and take damage like a real one would) the multiplayer mode will be something enjoyed at LAN parties and tournaments for years to come. With the addition of a fully fledged single player campaign it appears that EA are trying to attract some of the Call of Duty crowd, a game long known for its very cinematic and action-oriented single player experiences. 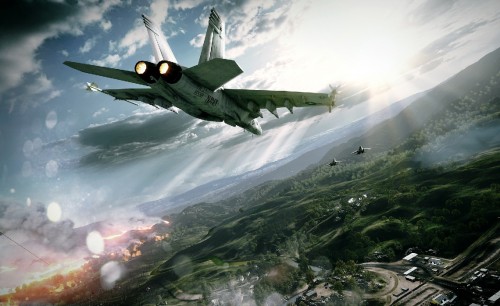 We had the opportunity to play a few hours of BF3’s multiplayer mode at GeForceLAN 6, and it was beyond all expectations. Although gameplay is very similar to BF2, that’s not really a bad thing.

Improvements have been made in almost every way, the least of which would be destructible environments, which means that street signs no longer cause your M1 Abrams tank to come to a complete stop – in fact, you can drive right through fences, barriers and even some buildings. The new maps are gigantic, and fighter jet fans will be happy to know that there’s a vastly increased flying area on each map, along with detailed environments below.

A few people have mentioned that they thought the gameplay trailers were staged because they looked so good – this is definitely not the case. Every animation, effect and texture has been finely tuned. It’s exciting to imagine what DICE has in store for expansions and downloadable content. We can only hope that the single player story is continued along with new maps and weapons in any expansions that come around.

EA declares war on the enemy

Electronic Arts is serious about beating Call of Duty this year. Even the game’s slogan – “Above And Beyond The call” – is a direct kick in the you-know-what to Activision. There seems to be a limitless supply of cool tie-ins, reality shows, gameplay videos, and the very smart move of providing an open beta on three platforms. When’s the last time you even played a demo of a game a month before its release?

With no open beta on the other side of the fence, gamers have no idea what the next Call of Duty will be like but are being told they need it – thankfully EA has provided great videos that will help you decide whether or not to line up at midnight to part with your $60. With a $100 million marketing campaign at their disposal EA have gone all out to make sure that you know what game you’ll be playing for the rest of the year – and probably for the next few years if previous Battlefield titles are any indication.

At the end of the day all you need to see is gameplay footage and you’ll see that the clear winner is BF3 – as long as you are playing on a PC, of course.

Did we mention that this game is going to be way better on PC? Even the PlayStation 3, the “newest” console around, is five years old now. Think about the PC you might have had in 2005 – do you still game on that?

It’s easy to see that console developers have reached the limit of what they can do with 2005-era graphics technology. PC gaming is capable of so much more but has been held back by simultaneous three-platform releases for the past few years. Thankfully Battlefield 3 was developed for PC first and console as a close second – the cycle has been broken and PC gamers are being blessed with a major release that doesn’t hold back – in fact, BF3 pushes things so far that 360 owners will receive the game on two DVDs, and PS3 users on a very packed Blu-Ray.

The next generation of consoles may once again level the playing field (think no more low numbers for online gaming, and more efficient Steam-like content delivery, along with seriously improved graphical abilities) but Sony and Microsoft have both indicated that they are at least two years away from releasing follow-ups to the PS3 and 360. Will this be the title that starts a trend of console gamers returning to PCs? With the cost of modestly equipped gaming PCs getting lower every month it could be reality before you know it.

It’s a great time to be a PC gamer

It feels like ages since a PC-centric blockbuster title has been developed. With support from industry leaders like Nvidia, EVGA and more, a huge ad campaign – not to mention money spent on developing the game itself – it almost feels like we are returning to another golden age of PC gaming. Thanks to content delivery systems like Steam (though BF3 will be absent from Steam, much to many people’s dismay) and Origin, it’s easier to be a PC gamer. Publishers get instant results on what their customers are playing on and their usage habits, and are able to tune the gameplay and patches to address any issues.

In the last five years PC gaming has changed considerably, with prices dropping and graphics power increasing exponentially. Even laptops are now considered a venerable gaming platform, and for under $1000 you can get a portable gaming powerhouse –  something that didn’t really exist when Battlefield 2 launched in 2005. Based on what we’ve seen, this could be the start of great things. But like we said before, if you aren’t sure about your computer’s gaming abilities, get yourself over to your favorite online or local retailer and make sure you are prepared for what Battlefield 3 has to offer – you won’t be disappointed.