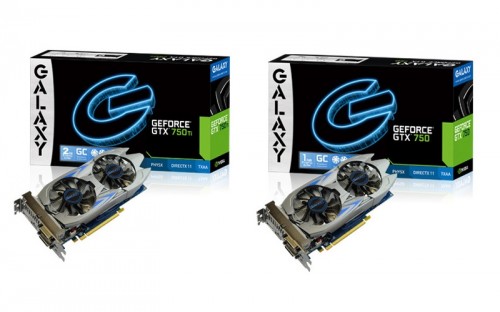 The graphics card market will always be a fight over market share, performance, and prestige. For PC enthusiasts, it is the most upgraded and replaced, and it has the largest market diversity. This year, Galaxy is making big moves with the new Nvidia GTX 750 chipset with its latest cards.

The Galaxy GTX 750 and GTX 750 Ti are two very different GPUs at the heart, but both feature the Phantom dual fan cooler. This cooler is designed to not only keep both cards in the green even with the 100 Mhz factory overclock, but to give users even more headroom for overclocking. This is helped by the unique auxiliary 6-pin power input and enhanced 3+1 phase delivery. Need more power, just add more power.

The Galaxy GTX 750 has decent numbers with 512 CUDA cores and 1 GB GDDR5 RAM at 5.0 GHz; however, the GTX 750 Ti comes with 128 more CUDA cores and 2 GB of GDDR5 RAM at 5.4 GHz. While there is currently no pricing information, you can expect to see a larger number associated with the “Ti” version.

Galaxy Microsystems, a leading manufacturer of the world’s highest performing graphics cards, announced today the Galaxy GeForce GTX 750 GC 1GB and GTX 750 Ti GC 2GB—the 1st graphics cards built with the latest cutting-edge Maxwell GPU architecture. The GTX 750 GC is armed with an impressive 512 CUDA cores and 1GB of GDDR5 at 5 GHz, while the GTX 750 Ti GC is fully loaded for even more intense hi-res gaming with 640 cores and 2GB of 5.4 GHz GDDR5 ram. Both cards are factory overclocked more than 100 MHz beyond stock speeds and feature the new whisper silent Phantom dual fan cooler on an extended PCB of Galaxy’s own custom in-house design.

The new hyper-efficient architecture reduces power usage to a fraction of that in previous generations, and Galaxy’s unique design adds 6-pin auxiliary inputs with enhanced 3+1 phase power delivery to provide additional overclocking headroom for enthusiasts. Both the GTX 750 GC and GTX 750 Ti GC include support for the most advanced new gaming technologies such as NVIDIA G-Sync, ShadowPlay, and PC Streaming through NVIDIA SHIELD.

Users can connect up to four simultaneous displays on a single card, three of which can be used for exhilarating multi-display Surround gaming. Microsoft DirectX 11.2 and OpenGL 4.4 support lets both GPUs take advantage of the newest and most advanced features in current games and software for breathtaking visuals and maximum performance boosts.