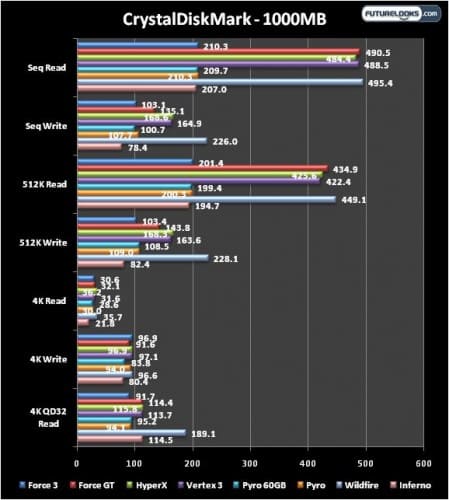 It's a close race between the synchronous Force GT, HyperX, Vertex 3 and Wildfire. However, it's the Wildfire that reports relatively strong 512K write and 4K QD32 read transfer rates. The HyperX read 4K data the best. The asynchronous Force 3 and Pyro SSDs scored similar 512K and 4K data block performance, but much less Sequential performance. 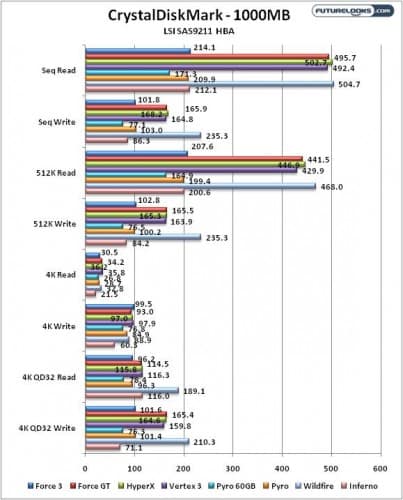 The LSI SAS9211 HBA improved sequential performance for the synchronous Force GT, HyperX, Vertex 3 and Wildfire. It improved performance minimally for the rest. In fact, it slowed the Inferno SATA2 SSD noticeably. This could be due to firmware or SATA2 miscommunication between the SATA3 HBA.

In this round of tests, I tested all of the SSDs using the native Z68 port and HBA card. Again, you'll notice that the LSI card performs a bit better using the PCIEx4 slot.

Once the SSDs cooled off, it was the Patriot Wildfire that lead the pack but only just over the Kingston HyperX. The Vertex 3 and Force GT fought a seemingly epic battle that would not end in either favored. With the scores so close, it got me to thinking that perhaps the PCIEx4 slot might be holding back the LSI card. Thus, we move on to the X58 testing platform.