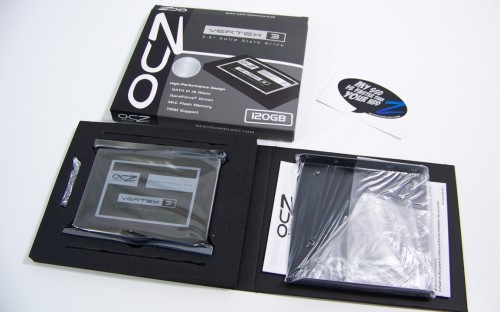 Included in our Vertex 3 retail box is a sponge like insert which contains your SSD, black adapter tray, screws, OCZ sticker for bragging rights and product paper work. Software updates are provided by OCZ online tech support if needed along with links on the product pages. Let's put all these SSDs to work on the bench. 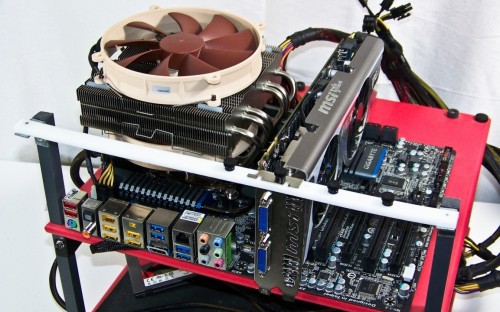 There are several ways to interface with a SATA3 SSD. We'll be using the two most optimum SATA3 configurations for our tests: motherboard native chipset (X58) and an add-on LSI SAS9211 "Spitfire" 4-port SATA3/SAS HBA (controller) card provided by Puget Systems. This is one of the better high performance RAID HBAs often used by pro users and will eliminate any bottlenecks presented by an onboard solution.

Marvell SATA3 testing was performed, but not included in the scores simply because it can't produce bandwidth like the native Z68 SATA3 ports much less the LSI add on card. However, the SSDs didn't have any real issues with the Marvell. Again, the LSI card eliminated any problems related to different controllers on different boards.

All the SSDs were updated to latest available firmwares, but updating an SSD involves some slight risk making it prudent to back up your data. Once you update they can never be rolled back to the previous firmware.

Doing some online research has turned up users reporting issues like stuttering, freezing, dropping and BSODs. Some aspiring minds suggest the SF-2200 series controller is the culprit while others suggest that Intel chipsets may not have enough resources to accommodate all the bandwidth. With that in mind here are some issues I experienced and some suggestions to fixing yours. Keep in mind that all these issues were encountered using the native SATA3 ports. No problems occurred using Marvell controllers or the LSI card.

Just the Corsair SSDs encountered some IO errors at first but after updating to 1.3 firmware and swapping the cable, the issues were gone. After that, the Force GT disappeared and Pyro scored one IO error, but neither could be reproduced throughout retests. The Vertex 3 couldn't communicate with the LSI card properly once in Windows on the Z68 system without firmware updates all around. Once updated, it was a non-issue. However, it worked perfectly on the X58 from the start.

Sloppy or insecure SATA cables can definitely affect performance. I was able to create random issues using a couple random SATA cables which included slow performance, errors and connection problems. The Corsairs were especially susceptible to questionable cables. If your native storage and system expansion ports are pretty packed and you continue to have problems, I suggest moving some things back up and putting ROM drives on your Marvell ports. You really won't notice the difference between the ports for your optical drives. 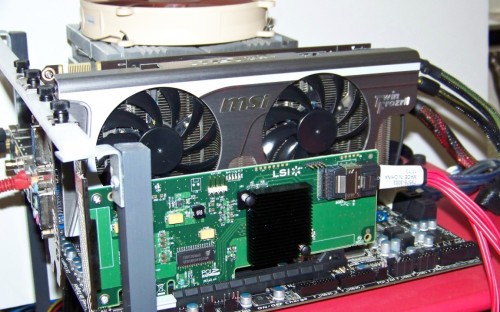 To better show the data transfer performance built in to each SSD, we'll be using a combination of CrystalDiskMark which gives us some real world read/write transfer rates, Argus Monitor that offers a very detailed realistic storage benchmark analysis, ATTO which will give us the IO performance and QuickBench which provides data block performance readily supported by OSX, Linux and Windows. All benchmarks were performed with the system in AHCI mode.

For users not aware, IDE mode is hardly the optimal mode for getting the best performance from any SSD. Make sure it's running in AHCI for best performance and for updating the firmware. Keep this in mind if you reset or update your motherboard BIOS later on as it will effect system performance.