The EVO is indeed a sexy looking little m-ATX board. It looks a lot like its ASUS P7P55D-E Pro sibling we reviewed a few weeks back. They also share very similar if not the exact same features other than one is m-ATX and the other is full size ATX. The EVO sports the same cool abstract MOSFET heat sinks that look like a bunch of V letters jammed together. The chipset heat sink is also the same with the cool machined graphic. It’s these heat sinks that let you know the board is far more than just stock.

As you can see, the board is pretty well designed and offers a nice array of features. The layout is pretty well organized. There are a couple things we’d like to point out that could be omitted and/or improved. 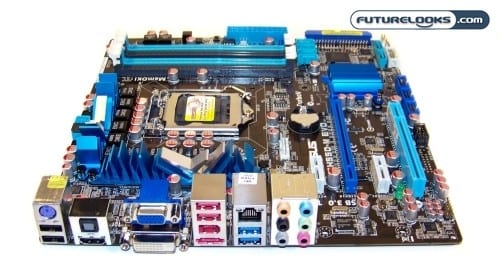 First, we wouldn’t mind seeing the IDE port kicked to the curb. Technology has moved far enough ahead, that there’s no feasible reason for someone to use a much slower IDE device on such an advanced platform. If the connector was omitted, some horizontal SATA ports could be added removing any possible wire cluttering near the video card. As it is, there looks to be enough room to make it work just fine. We just like things nice, neat, and up to date. Most importantly though, legacy free.

If you look closely at the 24-pin main power port, you can see the MemOK! button. This has been a very useful feature when pushing the DDR3 memory a little too far during overclocking. You don’t even have to reset the BIOS to recover. Just press the button and let the board figure it out working settings for you so you can try again. 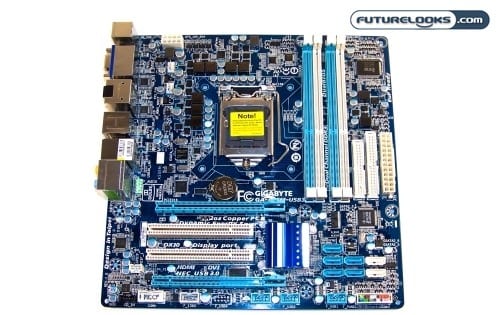 The GA-H55M-USB3’s features are built around the “333” format: 3 times more USB power (even capable of charging the power thirsty Apple iPad), USB 3.0 support, and Ultra Durable 3 which marks the return of the 2oz copper PCB as well as various upspec’d capacitors and MOSFETS. Despite the less than aggressive look, the platform does have a few performance features up its sleeve. For starters, it supports DDR3 memory up to 2200MHz which means there should be some unseen power underneath the hood. And, it appears to have some 8-Phase PWM given the circuit count.

The Smart 6 software suite can be found on the disc bundled with the board. You’ll find programs like Smart QuickBoot, Smart Recovery to reverse system issues, Smart DualBios though it’s more of an integrated hardware feature, Smart Recorder which tracks actions on your system, and Smart TimeLock which is handy for letting your children know when they’ve been on long enough. 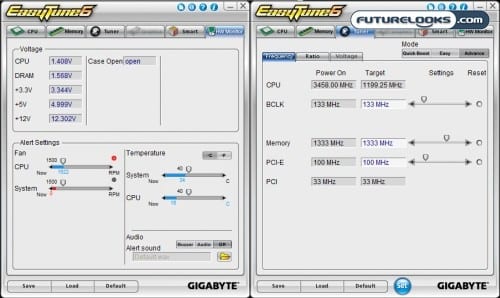 GIGABYTE also bundles Easy Tune 6 with the board. This is their own flavor of overclocking and monitoring software. It’s just as comprehensive as any other OC-ware we’ve used to date. Testing will tell us how good a job the coders did with it.

Home theater fans will also like that the GA-H55M-USB3 offers Dolby Home Theater. This should come in handy for when you need to get your movie on and are expecting to experience it rather than just watch it. It definitely makes a difference.

The USB3 is GIGABYTE’s top m-ATX which sports the simplest of design and theme of the three m-ATX brothers. The only sporty thing on the board is the south bridge chipset. Compared to the ASUS, it’s not as flashy a motherboard. While some flash would be nice, it isn’t always required in order to be a top performer.

Unlike many of their other platforms, the USB3 offers the standard vertical SATA ports just above the second PCI Express slot which unfortunately does not support CrossfireX. If it did, GIGABYTE would have had an ace up the sleeve in the high performance department. Some horizontal ports would clear any potential issues up a bit around this area though. 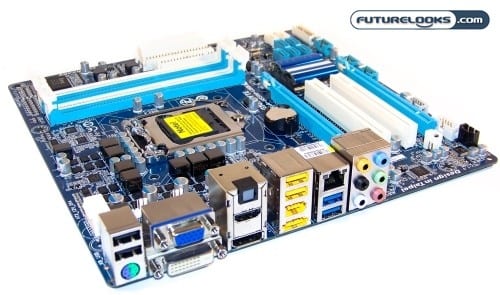 As mentioned, there is a proven Dolby Home Theater audio CODEC on board that further demands SATA over IDE performance. Again, while we understand they want all users to be able to make the jump to the platform, the same users would be shooting themselves in the foot and seriously limiting their system performance. Having said that, even GIGABYTE’s top end 890FXA-UD7 AMD board still has an IDE port on it so maybe it’s something that they “think” users want when they don’t. On the bright side, GIGABYTE does innovate with their dual purpose USB ports. When they are not being used as eSATA ports, they can be used as USB 2.0. Same port, two functions and they’re the two bottom ports where the four yellow ports are grouped.

One thing the GA-H55M-USB3 offers that the other boards do not is a Display Port. It’s really not a necessity today, but it does give one an extra connectivity option if you’ve run out of regular HDMI ports tomorrow. Plus, sometimes that’s all you have lying around and don’t feel like spending $30 on an HDMI cable.