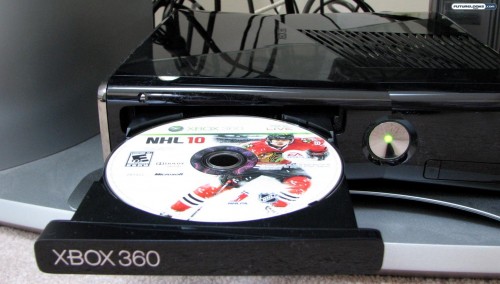 We still get a regular tray for the optical drive instead of a slot-loading variant, but Microsoft has swapped out some of the hard buttons for touch-sensitive ones instead. To eject the drive, for instance, you touch the small “button” above it. Similarly, the power button is now touch-sensitive as well. However, the “sync” button for connecting new controllers is still a regular button and it is located next to the two front USB ports, which have now been rotated to be parallel with the drive.

Bid Adieu to Red Ring of Death… Sort Of

One of the most primary concerns for current Xbox 360 owners is overheating and the resulting Red Ring of Death (RROD). Microsoft knows about the problem, of course, so they’ve outfitted new Xbox 360 S with what appears to be a bigger fan and better cooling. 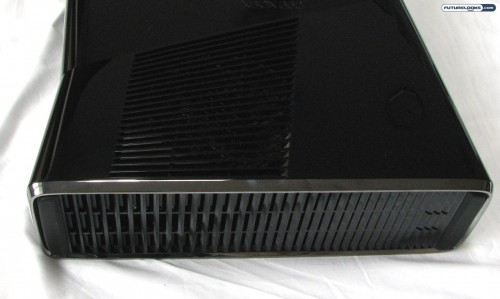 You’ll find massive vent cutouts on one side of the unit, as well as massive venting on the top and bottom. As such, using the Xbox 360 S in a horizontal fashion, ideally with a notebook cooler underneath it, is probably your best bet. I also found that it ran quieter than the old unit, which probably means it was generating less heat because the fans weren’t running as hard. How else are they getting rid of the Red Ring? By removing the red LEDs, of course! Those lights are no longer behind the power button at all. What happens now is if the Xbox starts to overheat, the Xbox will automatically want to turn itself off.

How to Migrate from Old Xbox to New Xbox

If the Xbox 360 S is your first Xbox, then this section doesn’t really concern you. If you’re upgrading from an older unit though, you’ll really want to read this section. That’s because the transfer process isn’t quite as straightforward as you’d hope. Basically, it consists of three over-arching steps…

1. Transfer your game content. You can do this by buying and using the Hard Drive Transfer Kit (which sells for $20 from Microsoft) or you can transfer 16GB at a time with a formatted USB flash drive. I hear that an online solution is coming too, but I’m not entirely sure how that works.

Be forewarned: using a USB drive is a long and tedious process. If you go to the data management section of the settings on your Xbox, you can transfer files to and from the hard drive. Save from your old Xbox hard drive to a flash drive, and then save from the flash drive to the new 360 hard drive. 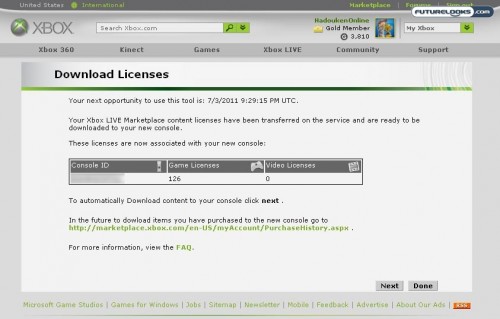 2. Use the License Transfer Utility on the Xbox website. You can only use this once a year and it transfers the DRM license from your old console to the new one. You’ll need this for XBLA titles and other DRM-protected content.

If you don’t want to do this, it means that you need to be logged into your Xbox Live account on the new system any time you want to access your old content. That’s a pain. You’d rather do the license transfer.

3. Save the licenses on the new console. This is the part that confused me. To save the licenses, you actually choose the “Download Again” option in your purchase history. You do this in the account management section on the Xbox.

If you have already saved the actual game files (saves, XBLA titles, DLC, etc.) to the new hard drive, the “Download Again” process will only grab the license and not the actual files “again.” 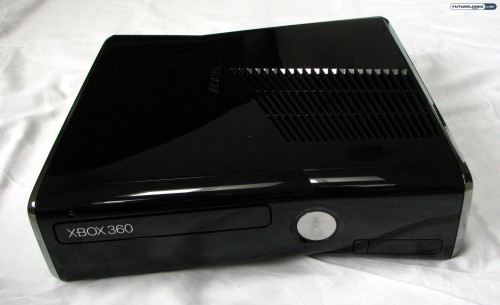 What do I think of the new Xbox 360 S? It’s a great step forward for Microsoft, offering a snazzy new design that is still familiar in many ways. It’s also great to see integrated Wi-Fi, more USB ports, a smaller size, and an internal hard drive. Is it worth an upgrade? That’s really debatable. It’s still not terribly cheap at $299US, especially now that you can probably find a sale on the older versions, but the bigger hard drive and built in Wi-Fi connectivity are big draws.

I say if you already have a 360 and you’re happy, I wouldn’t bother. If you’re thinking about buying a bigger hard drive and a Wi-Fi adapter, then you might as well buy this new hotness instead.