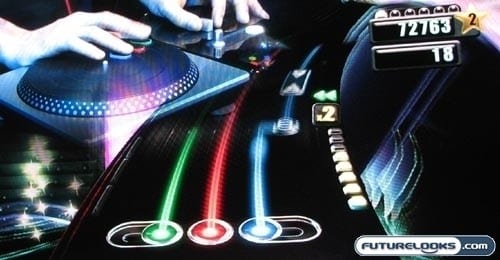 Just as Konami did with its Bemani series of rhythm games back in the day, Activision is expanding its rhythm game family beyond the now iconic Guitar Hero franchise. We already saw the introduction of the microphone and drums for Guitar Hero: World Tour, but we’re also getting a whole new game altogether called DJ Hero.

Developed by FreeStyleGames, DJ Hero offers a brand new plastic instrument for you to enjoy: a simulated DJ-style turntable. The “notes” still stream down a highway, but the highway is not linear; it has a curve, simulating the circular shape of a turntable.

On this turntable are three buttons. The green one (left) represents one song, the blue one (right) represents a second song, and the red one (center) represents sound effects. There’s also a crossfader, an effects dial, and a “Euphoria” button. Every track that you play is actually a special mix of two songs. For example, you’ll see a crazy mashup of Eminem’s “My Name Is” and Jay-Z’s “Izzo (H.O.V.A.)” in the clip below.

For me, the gameplay looks very daunting. You have to tap the colored keys in time with the highway, but you also have to “scratch” when you encounter the equivalent of a sustain. And then the note highway will also pan to the left or right at times, getting you to push the crossfader in one direction or the other. Oh, and in case you’re wondering, Euphoria is basically the same as Star Power.

It may be daunting, but DJ Hero looks positively awesome. You can also expect a special Eminem and Jay-Z edition turntable controller too. DJ Hero launches October 27, 2009 on the Nintendo Wii, Xbox 360, PlayStation 2, and PlayStation 3. 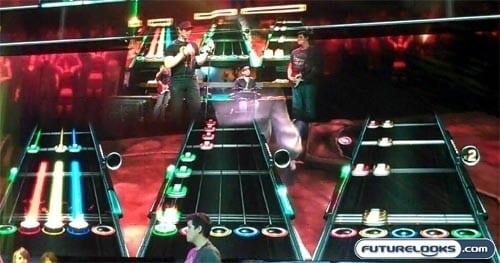 Although the number was never really in its official name, Guitar Hero World Tour was really just Guitar Hero 4. As such, the next major installment in the franchise is Guitar Hero 5.

Gameplay, as you’d expect, remains largely unchanged from World Tour. You still have a couple of plastic guitars, a microphone, and the five-pad drum set. The notes still stream down the highway and you still get some characters playing instruments behind the notes. That said, Neversoft and Activision did bring a few new features to this game.

As you may recall in my review, I said that Guitar Hero’s multiplayer screen was not very user-friendly. I didn’t like how it was so hard to see your individual Rock Meter rating and it was unfortunate that you could not save your bandmates. That’s all changed. The individual Rock Meter has been placed next to your highway and when one band member fails out, a Revival meter appears allowing bandmates to resurrect him or her.

Neversoft also introduced the new “Party Play” mode. The idea here is that you can set up a playlist (with up to 100+ songs) and have them play through, whether or not someone is actually playing the game. Players can jump in and drop out on the fly, both in between and during the songs. Furthermore, you are not restricted to the forced configuration of a lead guitar, bass guitar, drums, and vocals. You can actually have any combination of the four.

If you and your friends feel so inclined, you can all play on the drums… if you have four drum sets. You can also drop out and jump back in with a different difficulty setting too.