As with most gaming headsets, you can just plug it in and play. The included USB dongle needs to be plugged into an available USB port on your computer though for this headset to work. Being a Corsair product, the CUE or Corsair Utility Engine will recognize the headset and allow you to check the charge level of the headset. The Corsair HS70 also supports Virtual Surround on the PC.

The CUE software will allow you to switch the headset from stereo sound to virtual surround. The headset, at the time of this review, does not seem to work when it is plugged in with the USB charging cable though, which is a shame, but you can charge it via the cable and still use the headset while it is connected via the USB 2.4GHz dongle. 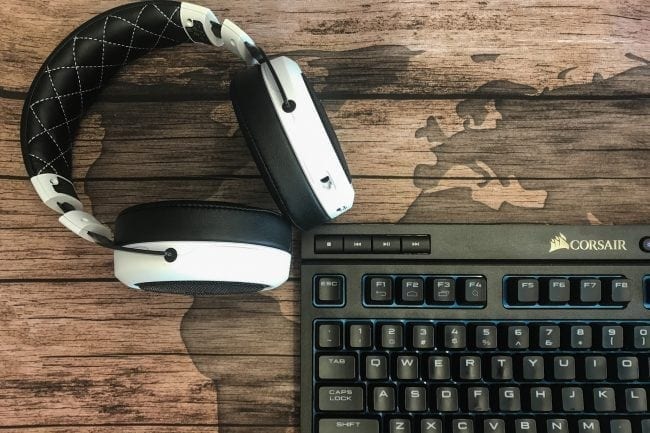 The comfort of the Corsair HS70 Wireless Gaming Headset is great. The plush memory foam ear cups allow for extended use without discomfort. I also did not experience any “sweaty ears” with prolonged use, unlike with other headsets in the past. The headband is comfortable as well. As mentioned earlier, the ear cups are large enough to go around most people’s ears, which for me, is a preferred thing. I personally find headsets that sit on top of the ears uncomfortable.

The overall construction of the headset is great. It does not feel cheap and plastic-like. The weight on the head is not too bad and the memory foam helps with comfort.

The Corsair HS70 also supports use on the Sony PlayStation 4, so I checked that out as well. I plugged in the USB dongle and it instantly recognized it and switched over to the headset. Being a parent, it is great that I can make use of a wireless headset with the PS4 so that I do no wake up the kids when I am doing any late night console gaming.

The headset did such a good job that while playing The Last Of Us (Remastered), I didn’t realize that my son had gotten up and had been watching me play. The headset blocked the ambient noise as I didn’t hear him walking on the hardwood floor. One down side is that the HS70 does not support the use of the Virtual Surround Sound under the PS4, which is a shame as that would be pretty cool.

I also tried the Corsair HS70 out at work on my Ubuntu 16.06 desktop. At first, I had some issues but that was quickly resolved with creating a little script that allowed the USB dongle not to interfere the the mouse click events.

It looks like under Ubuntu (perhaps other Linux distros as well), the USB wireless dongle shows up as mouse hardware and you need to configure one of the values so that the headset’s buttons wont be interpreted as a mouse and override whatever mouse you are currently using. Gaming hardware is typically lacking support under Linux distributions but I was glad I could get it to work.

This is the first wireless headset I have used extensively and I have found it to be quite a positive experience. The range is pretty good; Corsair says it has up to 40 ft range and depending on what is in your environment, I found the range to be a bit less than that before the audio started to cut out. I can easily pop into the kitchen to get a snack or a drink, check on the kids when they are sleeping, or pop outside.

The Corsair HS70 is running on a 2.4GHz band like some Wi-Fi devices and even your microwave oven, so your range and experience may vary depending how “noisy” your environment is. For my particular gaming setup, I have a Corsair K63 Wireless Mechanical Keyboard and the Corsair DarkCore RGB Wireless gaming mouse all running wirelessly and the headset runs perfectly fine. There are even other 2.4GHz wireless devices in our home that would add to the noise and none of my wireless gaming peripherals had issues.

The battery can hold roughly a 16-hour charge and after about 4 days of using the headset, I had to finally plug it in to charge. Not bad for a wireless headset that’s being used almost 8 hours a day. Luckily, you can still charge the headset while using it, but it will only work if you still have the wireless dongle connected to your computer. The USB port on the headset is strictly for charging the headset.

One thing I did notice with the CUE software is that the HS70 does not have the option to display the battery charge icon on the system tray for Windows 10 like the Corsair keyboard and Corsair mouse I have.

To test the audio performance of the Corsair HS70, I listened to a variety of music from a variety of streaming and non-streaming sources. Of course, I also took the headset for a test run through a couple of different games, such as Fortnite (PC), 7 Days to Die (PC), and The Last of Us (PS4).

With most gaming headsets I have used, they tend to be a bit heavier on the bass. The Corsair HS70 is not much different as it is a bit heavier on the bass but not overpowering. The great part is that it doesn’t get in the way of the vocals on games or music. The vocals come in crisp and clear which can be important if you are chatting with friends or listening to NPCs.

The range on this headset is pretty good and I enjoyed the various music I have pushed through it. I’m sure audiophiles could get more into the nitty-gritty of the Corsair HS70, but a headset that lets me enjoy my music, enjoy my gaming and doesn’t put me out of pocket I think is great.

Out of the box, the Corsair HS70 Wireless Gaming Headset does quite well. In fact, it is pretty good for a gaming headset at this price point. The following is a quick microphone test:

The quality is good from a straight-out-of-box standpoint and you can easily tweak the sound to more your liking with a program such as VoiceMeeter Banana.