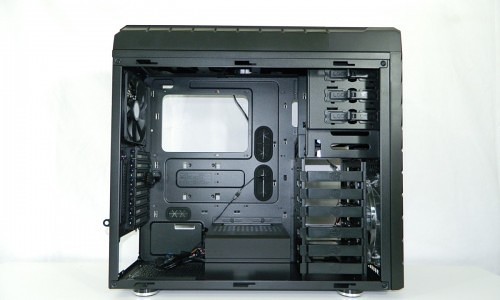 Switching on the photo lamp, you can see the HAF XM is pretty wide and long. Really long video cards will easily fit. There are rubber grommets everywhere for routing wires behind the motherboard tray. An adjustable tray covers the cable port side of the PSU. Useful for hiding wiring. Removing the screws makes it possible to pull it out which you’ll have to do for connecting your power cables.

In terms of cooling, you can see the front red LED 200mm case fan controlled by the front panel buttons. There’s also a rear 120mm standard cooling fan. And, the top ships with a single 200mm standard cooling fan with white blades. Given the air flow dynamics, it would be nice to see one side panel fan to ensure cool air hits the board. As it stands, half of the air will be pulled to the top before reaching the components. The only remedy is a higher RPM fan in front which creates noise we may not want. 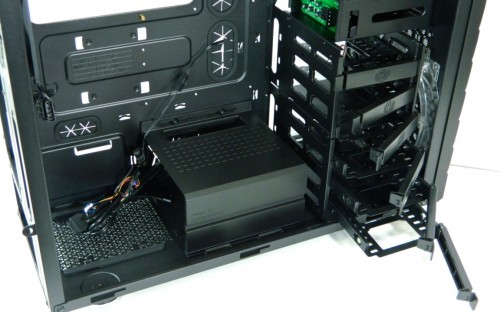 Storage consists of six removable tooless hard drive trays with latching hinges. They are pliable and easy to use. There’s plenty of space behind for power and data cables. Next up are the two hot swappable 2.5″ storage bays accessed from the front. At the top are the three 5.25″ tooless ROM drive bays. 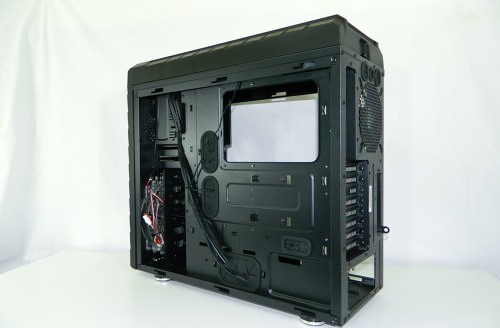 Finally, the left side has plenty of wire management space. The panel also has a molded shape creating even more space for those stubborn connectors and stiff wires. There are also four small tabs that accommodate a single 2.5″ SSD for mounting behind the motherboard. While useable, I personally like seeing my pimped out Kingston HyperX SSDs near the front. But if you plan to use this case at a LAN event, then these are definitely nice touches to keep fingers that don’t belong off your stuff.

Five sensors from an NZXT Sentry LX temperature monitor were attached which new thermal tape to the side of the CPU cooler, video card vent, North Bridge heat sink, South Bridge heat sink and hard drive. (Actual internal component temps will be higher).  The sensors and component fans will let us know if cool air is reaching them. To simulate the closest real world scenarios possible, the system was left to idle for two hours and then loaded down running Unigine Heaven Demo (heats up the graphics card) and OCCT Linpack (loads down the memory and CPU). The sensors were monitored during the process. I also monitored case fan noise and how much noise the case blocks.

The HAF X had a lot of chassis blocking the air coming in from the front. Adding a fan behind the middle VGA fan duct helped direct cool air to the system driving down temps and cooler fan noise. The HAF XM suffers from a different set of issues despite that nice big front intake fan. The PSU cover creates an obstacle trapping and blocking the air that makes it through the drive cage from reaching the lower portion of the system. That chaotic air pocket causes air to naturally flow upward further limiting the amount of cool air reaching the system. With me so far? 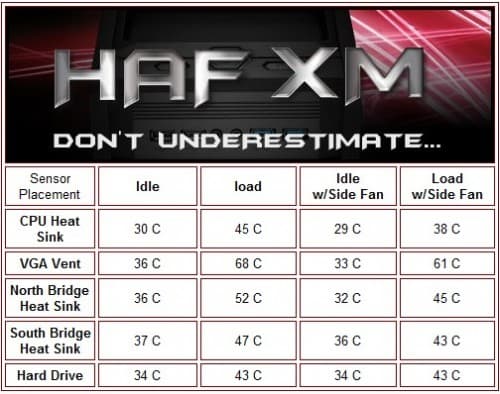 Removing that PSU cover allowed cooler air to reach the system dropping temps which the CPU and VGA cooler confirmed going from 50 dB to 40 dB, which means the fans are now working less hard. This is the only option if you buy the window version. However, the full panel version allows users to add one 200mm or up to two 120mm side panel fans which definitely improves temps. Adding one 120mm fan to the left vent improved temps. Removing the PSU cover as well further improved temps resulting in even lower cooler noise. Overall, the case blocks about 10 dB from the sides and front.

Putting things in perspective, this is the hottest and loudest system I can assemble to test thermal dynamics. Most users will opt for quieter high performance CPU coolers which are all but guaranteed to be quieter than the stock cooler. And, today’s video cards have better coolers and more efficient GPUs. Your results will absolutely vary and most likely be better. 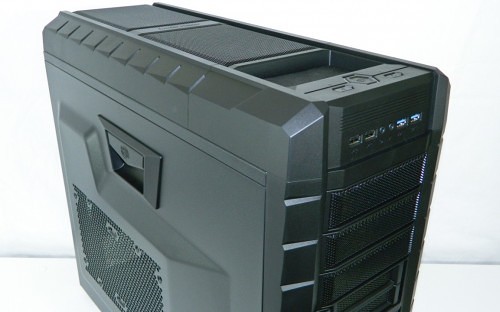 For almost two years, my favorite power hungry system was housed in a Coolermaster HAF X NVIDIA Edition full tower because it worked with the Extended Length ATX GIGABYTE G1 Killer Assassin motherboard. The HAF XM reminds me a lot of it, except for reduction in motherboard sizes, which is actually just fine. After all, it is a mid tower case designed to offer the best of the original HAF X but without the size.

The Coolermaster HAF XM offers some really useful features like the hot swappable X-Dock trays, tooless hard drive trays, wire management, easy side panel access via an access handle, and of course the potential for decent system cooling as long as you’re willing to add your own side panel fan. While the PSU cover is a nice touch for hiding some wires, it’s not necessary and can help air flow if left out. With a well configured build, the HAF XM will really help cool hot system components and control system temperatures.

Some of the popular online retailers will be offering the CoolerMaster HAF XM mid-tower computer case with and without the window for $129.99 US/CA. In either case, the smaller footprint is very welcomed. I highly recommend the HAF XM for housing your next system or for updating a current one.