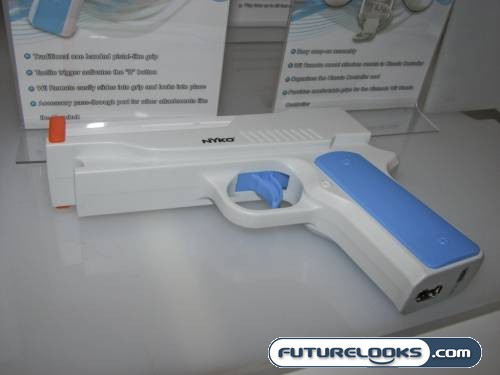 As an alternative to the Wii Zapper, Nyko has the Perfect Shot. It’s actually quite a different beast, because the form factor is closer to the traditional light gun games that you find in the arcade. I found that it was very head heavy, because there are virtually no components in the pistol grip whereas the Wii Remote packs pretty much all of the weight. They say that this “one handed pistol-like grip” is more intuitive for traditional shooting games. They also say that the B button-activated trigger is easier to use than Nintendo’s official offering. Heck, it’s even got an aiming sight. If you’re wondering about Nunchuk connectivity, there’s a pass-through that goes through the grip. 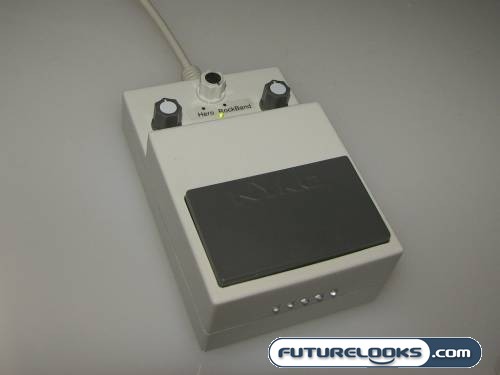 I’m usually not a big fan of third party peripherals for video game consoles, because their build quality and usability typically aren’t as good as their first party counterparts. Although the units that I fondled in the Nyko suite weren’t the final retail versions, I can say that they have done a great job with quality and innovation. I’m really looking forward to the final Frontman guitar for the Wii, because you can only play Guitar Hero III on the Wii by yourself for so long. 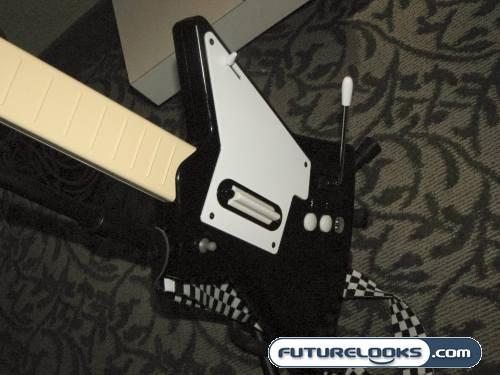 One final highlight I’d like to mention is the wireless guitar for the PS3 that allows you to play both Guitar Hero III and Rock Band. This is accomplished by a toggle switch in the base transmitter. Nyko says that they’re the first to do this.

For more pictures from our visit with Nyko you can check out our CES 2008 Nyko Photo Gallery.