I try to be as mature as possible when I refer to “accessories” from a company called Thrustmaster, but when the talk turns to shooting things with your Wii, I can’t help but to let out a bit of a nervous giggle. I’ll let you concoct your own bathroom humor. 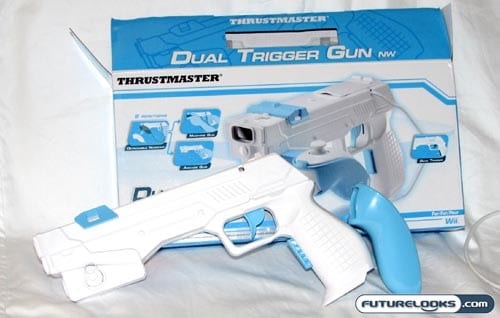 On a slightly more serious note, what you see here is the Dual Trigger Gun NW from Thrustmaster. Unlike the other Wii Zappers described in this guide, the Dual Trigger gun does not place the Wii Nunchuk behind the Wii Remote part of the gun. Instead, there is a handy hook-and-holster configuration that places the Nunchuk along the left side of the barrel.

According to the packaging, this is supposed to provide a machine gun-like experience for the gamer. Alternatively, you can remove the Nunchuk holster and use the pistol portion by itself as an arcade gun. 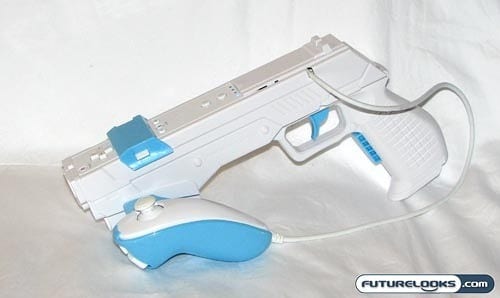 While there were no significant issues with fitment for the Wii Remote or Nunchuk, the cable management system is designed in such a way as to have the cord run along the left side of the gun. This shouldn’t get in your way, but it does take away from the aesthetics somewhat.

Like the dreamGEAR Rumble Blaster, the Thrustmaster Dual Trigger Gun NW also features dual triggers. Unfortunately, the system does not appear to work as well. When I pull the “A” trigger, the blue band across the top is supposed to activate the “A” button on the top of the Wii Remote. It works the first time, but I hear an audible “click” in doing so. After that, it doesn’t work anymore. This one will set you back about $17.99 US.

The Results of the Shootout 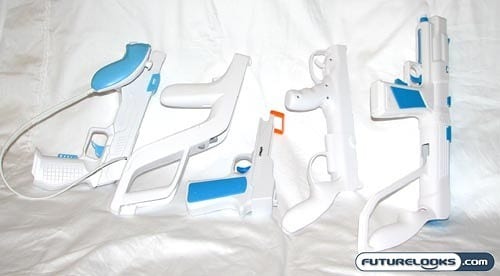 So now that we’ve been to high noon, the dust has settled, and we have experienced the Wii Zapper shootout, which blaster has come out as the newly crowned champion?

Well, they all have their faults and, as such, it was very difficult to pick just one as the absolute best. It would really depend on where your priorities lie and what shortcomings you’re willing to endure.

In terms of overall fitment and build quality, the title clearly goes to the original Nintendo Wii Zapper. It uses the best plastic, has the fewest fitment issues, and comes with a free pack-in game. However, it is also the least versatile and boasts the least number of features. 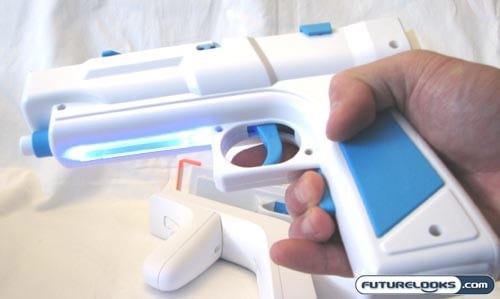 If I had to pick one Wii gun as my favorite, my vote would go to the dreamGEAR Rumble Blaster but only with the caveat that I don’t recommend its back Nunchuk-portion. Used for arcade-style rail shooters, its experience is the best. The dual triggers add utility, the rumble immerses you in the gaming environment, and the glowing blue light is just cool.

One suggestion that I have across the board, though, is that they really ought to expand beyond the white-and-blue color scheme. The occasion splash of orange isn’t sufficient.