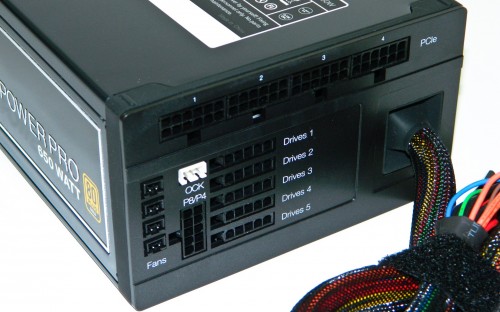 The DPP 10 has unique modular cabling. They’re neatly broken down in to sections for easy connections. If the labeling doesn’t help, the shape of the cable connector makes it completely “noob” proof. Even the OCK (overclocking key) cable has a place which transforms the multiple 12V rails in to one single 12V rail. The switch should be operated only when the system is powered down of course. 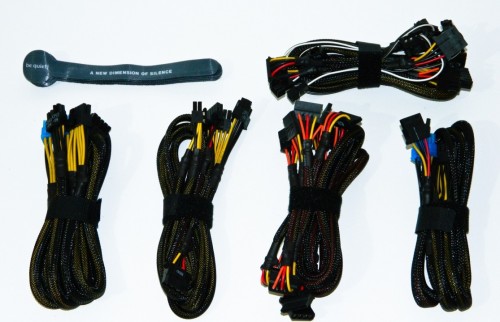 All the PCIE cables use their own 12pin power connectors while all of the drive cables have a flat 5pin connector. Interestingly, the P4/P8 (8pin) cable actually has a 10pin modular cable for the PSU. The unfortunate thing about all these proprietary cables is that you can’t easily replace them with just any cables from other units in a pinch. Also, there are a few single MOLEX (4pin) cables and they aren’t daisy chained which essentially adds more unnecessary cost as you’ll need splitters.

Another unique feature is the addition of four small fan ports. You’ll find four 3-pin fan jumpers included in the cable bundle. These can come in handy if your particular custom PC needs additional fans or flexibility for powering them. While they cannot be manually controlled, they are automatically controlled by a sensor in the PSU that will only ramp up the speed if needed.

Last time I tested a 650 Watt PSU, it took assembling an SLI and overclocked system to get there. It would be cool for appearances sake to use GTX 660 Ti SLI, but the cards use quite a bit less power than the GTX 560 Ti. Thus, it’s a bitter sweet return to my old test system.

As usual, idle and loaded system conditions were imposed while monitoring the DPP 10 650 voltage rails in both regular and OCK mode using an o-scope. Fan noise was recorded as best as possible from 2 feet away using an Extech sound meter. Let’s get to it.

People are going to use this power supply for gaming and for other builds that reach its maximum because it’s an 80Plus Gold certified power supply. First, I took at look at how the power supply deals with a typical power hungry gaming system pushing it to 85% load and then to max.

Voltages are well above spec here. And, during the repeated system use, voltages barely fluctuated at all if you call .006 a fluctuation. In fact, the ripple was in the area of 35mv at 85% load and 53mv at 100% load. While not shown, the +5V volt rail hit a low of 4.92 volts at full load. In terms of efficiency, the unit maintained an 88% efficiency right up to 100% holding true to the 80Plus Gold standard.

The PSU ran through the usual loaded levels to heat things up. I used the best sound meter in the lab to measure any noise from two feet. The noise was so low that the meter couldn’t detect fan noise even up close. We had a Puget Systems Serenity system in here before which was an amazing 11dB system and the PSU matched the recording. Under max and exceeded load, the fan was never offensive. The laser temp didn’t find anything over 54C on the inside. 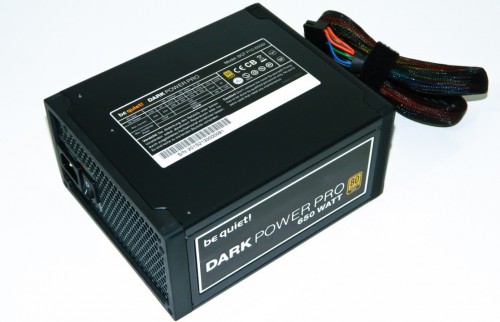 The very attractive bequiet! Dark Power Pro 10 650W is a bitter sweet power supply. It’s more than efficient, offers strong performance, has an unoffensive 135mm cooling fan, provides more than its rated output, utilizes rubber ends to eliminate vibration, but can’t be purchased just yet. However, they’re preparing to send these units to the shelves later this Fall and I’m sure that many of you will be looking for them not only because of the performance aspects, but because the Germans did such a great job with the color scheme and design of their products.

The bitter part is that the Dark Power Pro 10 650W  is estimated to hit the market at around $150 US MSRP. This places it at the top of the pricing scale in the 650 Watt segment. At this price range, it has to battle already establish manufacturers like Corsair, FSP, and Seasonic. Let’s not forget ANTEC as well since many of the be quiet! team were previously employed by them. But of course, the “German Engineering” card will be played, but when the product is made in China like all he others, one really has to wonder how strong this will resonate in a more price conscious North American market.

Taking pricing out the equation for a second, the Dark Power Pro 10 650w is perfectly targeted towards professionals and enthusiasts who expect serious performance and silence from a power supply. It really is a premium product that we have no trouble recommending. Our only hope is that we’ll see this premium product come to market at a more competitive price so that we can get a taste of the quality, and hopefully come back for more.