What Comes with Your ROG Maximus V GENE? 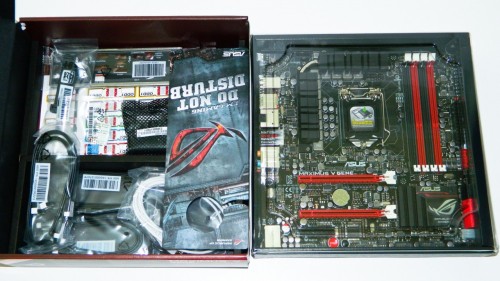 Not all BIOS are created equally, which has been very evident in the latest transition to GUI based interfaces. While the P8Z77 series utilizes a BIOS we found to be the best of all channel boards, the ROG series including the GENE have very strong BIOS code pumping through its veins. As with all Ivy Bridge overclocking, your CPU attributes will vary. While few can reach the 2800MHz DDR3 maximum, a higher overclock may be possible with the right components. Keep this in mind. 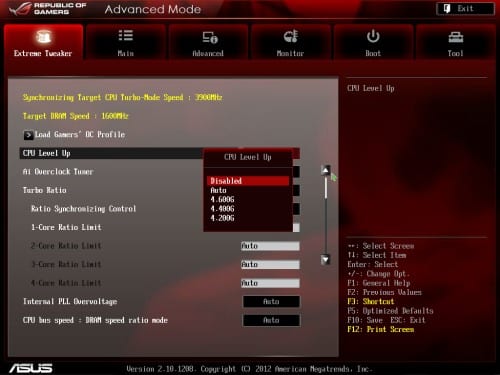 It pains me to admit, the GENE in the lab is far more potent than our Core i7-3770K. I fear the TIM (thermal interface material) underneath has shifted as heat is more of an issue now. With the right water cooling block, the GENE easily maintains the three overclock presets. The maximum overclock of the chip is 4.8 to 4.85GHz. The IMC was probably the first part to suffer as it can’t maintain 2800MHz DDR3 stability. However, the GENE keeps it in the 2600-2666MHz range.

However, my Core i7-2600K Sandy Bridge processor is a gem. The GENE made sure it hit 5.3GHz by using the tried and true Offset voltage option instead of manually applying voltage to the core. This setting only uses the necessary voltage as needed and not forcing a full 1.44 volts at all times.

All the components are the same used in our “INTEL Z77 Motherboard Round Up” a few months back. Even though the ROG Maximus V GENE is from the Z77 species, it is a different breed. My objective is to see if there are any benefits to being of the ROG kind.

Here’s the break down of the test configuration:

All the latest drivers, utilities, and BIOS were installed or used in testing. Screen resolution was 1920 x 1080 since this is a gamer optimized platform and this is the preferred HD resolution for gaming today. I did not have any performance level mSATA or mini-PCIE devices to test the empty module thoroughly so this will be left out of this particular review.

One potential issue did arise when installing the CPU cooler in the traditional orientation. The top PCIe slot is so close that it can make contact with a large CPU cooler longer than 5.375 inches (136.53 mm). The HAVIK 140 is a little too close for comfort so it may be necessary to turn your cooler sideways. If your enclosure has good air flow, it won’t hurt anything.

I started off comparing the board’s overall performance against the other Z77 boards in the lab. The benchmarks test things like BIOS to CPU tuning as well as many of the subsystems like memory. 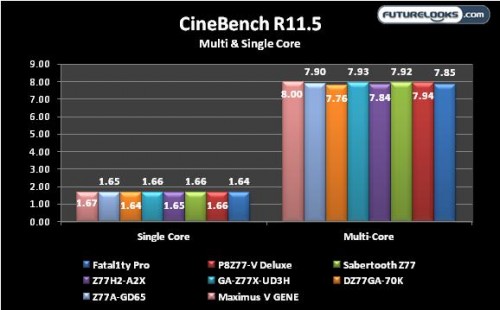 Single core performance is on par with the rest. However, Cinebench shows us how the ROG tuning benefits the processor. The score was consistent as well after repeated tests. Let’s check out another benchmark that ROG tuning can influence. 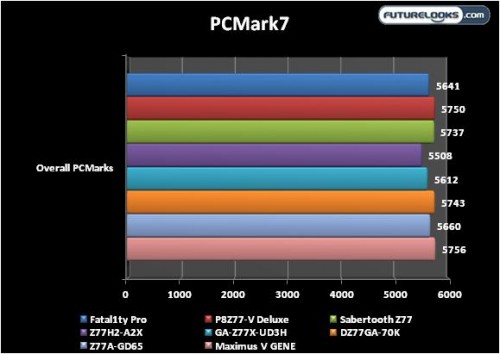 Again, the slightly more aggressive GENE bests its bigger ATX brothers proving that the size or number of components don’t make a system run better. This was achieved using the latest BIOS update as well. 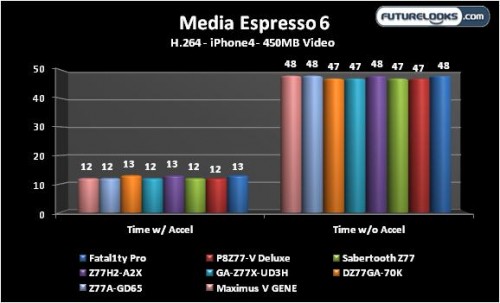 As expected, the CPU is mainly doing all the work here. I just wanted to see if there were any extra gains. Either way, no complaints.