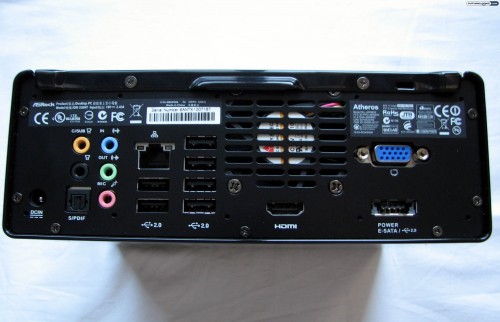 Whereas the Asus Eee Top ET1602 1B was more of a competitor to something like the Apple iMac series, the ASRock Ion 330HT NetTop belongs in your living room. It doesn’t come with a monitor, because your HDTV should be its screen and your 7.1 surround sound system should be its speakers.

Going from left to right, we see the AC power port, a series of audio jacks (including S/PDIF digital out), Ethernet/LAN, six USB 2.0 ports, HDMI out, VGA out, and a powered eSATA port. You’ll also notice a small fan in the center that helps to keep things cool. 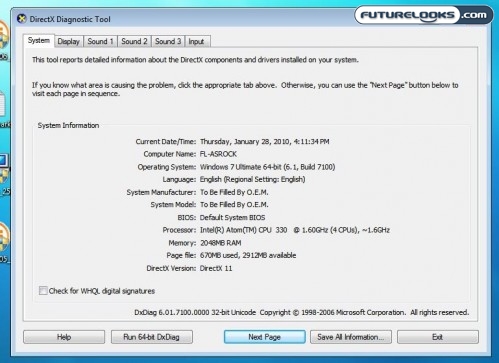 And this is one of the first things that struck me like a brick wall. Considering that the Ion 330HT is meant to be a consumer-friendly device that works right out of the box, not unlike a cheaper HD media player, it’s surprising to find that this HTPC did not come pre-installed with any operating system. If you do nothing else but connect the Ion 330HT to your television with an HDMI cable, you’ll get treated to a black screen with a somewhat cryptic message. If this is being marketed at the average consumer, they’ll assume that something is wrong.

It may not be an issue for more tech-savvy enthusiasts, but it does mean that you’ll need to supply your own OS. This of course means that your mileage, user experience and performance may vary depending on your OS of choice. This is not always ideal, especially since the machine was made for Windows 7 and thus so are all the utilities and drivers fort his machine.

For the purposes of this review, we managed to get an evaluation copy of Windows 7 Ultimate 64-bit. ASRock has also informed us that a new version of the Ion 330HT will be shipping with the OS and will be known as the ION330 HT/W7HP. The system will be pre-installed with the OS and all applicable utilities and be ready to go out of the box.

Remember that Media Center remote control that came bundled in with the HTPC? Don’t expect that to work right out of the box either, so you’ll need to go through the usual configuration to get the Media Center side of the equation to be operational.

After everything was reasonably configured and setup, however, the ASRock Ion 330HT was no more difficult to use than any entry-level computer. I chose to use the Microsoft Wireless Desktop 3000 since its wireless range makes it a good candidate for the living room.

In general, I was reasonably pleased with what the ASRock Ion 330HT had to offer in terms of everyday HTPC performance. Streaming YouTube videos over the Wi-Fi connection was a breeze, as was navigating through my music and video collection with Windows Media Player.

Part of this may be dependent on the types of video files that you throw at it, but I did find that some videos ended up looking choppy or having out-of-sync audio at times. I also had some trouble playing a regular DVD movie out of the box, but that was rectified with some new software. Yes, VLC plays everything.