This past Mother’s Day weekend (May 12 – 13th, 2012), in the heart of Richmond, BC Canada, NCIX had their first annual Tech Fair. Canada’s largest destination for PC enthusiasts welcomed over 30 different companies from every corner of the computer industry to Aberdeen Centre mall to help celebrate all things computers and mother’s day too. From graphics, to memory, to networking and of course, motherboards, cases, video cards and monitors, every aspect of the do it yourself market was covered.

Futurelooks had an interesting view of the whole event from behind the GIGABYTE and Kingston booths. Since I had built the demo systems for both companies, they needed me to stick around to talk about them and I had a blast. Everyone there was interested in computers and was happy to share and learn. Here were some of the highlights.

The GIGABYTE and Kingston Demo Systems

Starting out with an ANTEC P280 and an ANTEC Eleven Hundred chassis, I built two systems for the show to be placed at the GIGABYTE and Kingston booths…

The system was cooled by Antec’s Kuhler H20 920 liquid cooling system which features desktop control software that lets you customize the fan speeds and the color of the LED. We turned our to RED to match the new Antec Accent lighting strips. The system was powered by an Antec High Current Pro 850 Watt modular power supply.

GIGABYTE’s system featured their new G1.Killer Sniper M3 mATX Z77 motherboard. This board is unique because of its form factor, its enhanced audio and networking, and its ability to support CrossFire or SLI. It’s also a lot less power hungry than its Z77X-UD5H brother that we used for the Kingston build and would serve well inside a small chassis suitable for a LAN Party system. We tossed a Core i7 3770K on top of it and cooled that chip down with the same Antec Kuhler 920 liquid cooling system.

The system also got the Antec LED Accent lighting treatment in blue and was also powered by the same Antec High Current Pro 850 Watt power supply.

Both systems survived Aberdeen Centre’s crazy water show that should have been turned off. I spent at least 3 times over the weekend in a small puddle next to the power distribution panel. And of course, they were solid for all the system demos that I had to do with the record crowds that showed up for the event.

NCIX – They Really Do Love Their Customers

Many of the NCIX staff volunteered their time to come out to this event. Many of them driving for as much as an hour and a half just to get to the venue. The most important thing was that each and every one of them was happy to be there and it was hard to find anyone not smiling with such a great atmosphere celebrating all things PC. They even handed out flowers to all the moms.

NCIX’s two spokes people, Linus from NCIX Tech Tips and Linus Tech Tips and Esther Ho, NCIX’s other YouTube personality and PR Coordinator were out there signing autographs and making sure that everyone had a good time. Linus even did some LIVE unboxings on stage which all of his “Linusians” loved.

Since NCIX is Canada leading computer enthusiast retailer, there were tons of show specials that kept a long line waiting around the corner at the Aberdeen Centre store. They had Core i7 3770Ks for $319, GTX 670s from Galaxy for $369 and they even had Kingston 128GB SSDs for $99 and 8GB USB flash drives for 99 cents. If you wanted a deal for your new build, this was definitely the place to be. 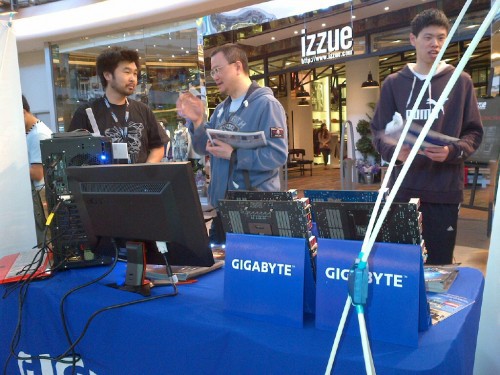 I had a real blast behind the front lines. The crowds were friendly, extremely diverse in age, both male and female, and most importantly, completely in love with computers. I had a great time educating and sharing stories about building systems and I even learned a thing or two myself. The most important thing I learned though is that the DIY market is bigger than ever and this event proved that.

While some are saying that the PC is dead, this event showed that maybe the PC is just evolving. People are more aware of what they want in their systems, are becoming more educated, and are more willing to give building a system a try thanks to events like this. It’s never been so easy to put a system together and I was so happy that I could show a few more people the way.

Kudos go out to the entire NCIX Team for putting on such an amazing event. I had fun and I know that each and every person I talked to at the event had fun too. See you at the 2nd Annual NCIX Tech Fair in 2013!