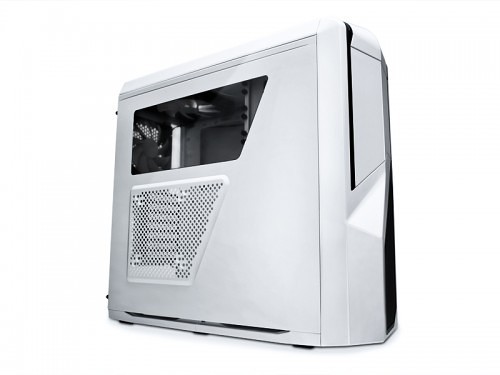 The original NZXT Phantom (reviewed here) wasn’t exactly a huge case. But it was meant for those of us with more components than just the basics. Size aside, it was also missing the all important windowed side panel and a side fan placement for GPU cooling. In an effort to appease those looking for a more compact case with features needed to turn the heads of enthusiasts, NZXT launched the Phantom 410 in not one, but all the popular colors. But what we wanted to know was, what does the Phantom 410 have to offer and does it cool as well or better than the original? Let’s find out! 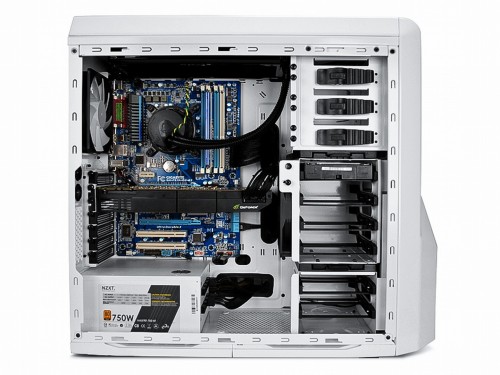 Futurelooks was on site at CES 2012 where the team were presented the NZXT Phantom 410 and new Switch 810 Hybrid case. One of the things that stuck out in the video about the Phantom 410 was that the colors were specifically chosen by their community of enthusiasts. How cool is that?  It’s worth a quick look to see what’s coming and what’s inside the Phantom 410 if pictures aren’t your thing and you want to sit back and enjoy a guided tour.

Many of you are familiar with the original Phantom which was well known as the “Storm Trooper” case. There are many enthusiasts, including myself, that wished it came in two models with and without a window. It’s such a striking case that you know something nice was put inside to match the exterior. It seemed a shame to not see it all. While the Phantom was recently given the windowed side panel treatment as an accessory door, there were other improvements that NZXT wanted to make. As a result of some user feedback, the Phantom 410 is a bit smaller yet adds a few other features to the list that the big brother doesn’t have. To cover the obvious, here is a table for comparison. 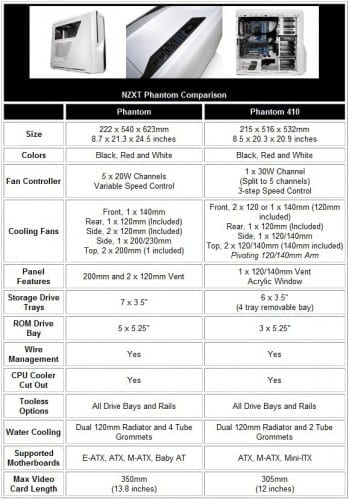 The Phantom 410 still accommodates a full sized video card. It also gets a removable hard drive bay as well as an adjustable fan shroud to help direct air where you need it. Naturally, it can’t adjust very much with a full length GTX 580 video card or two installed. It still directs cool air coming from the front of the case right on to the area your video cards which is what really matters. If that’s still not enough room, removing the center drive bays is now an option, allowing it to stay small and still offer the length to work with the longest graphics cards.

While the 410 does offer a different set of features, it’s also a lot cheaper than the Phantom was at launch. The Phantom 410 will cost you around $99 US or less whereas the original Phantom still sells for $129 or so depending on the color combination selected. 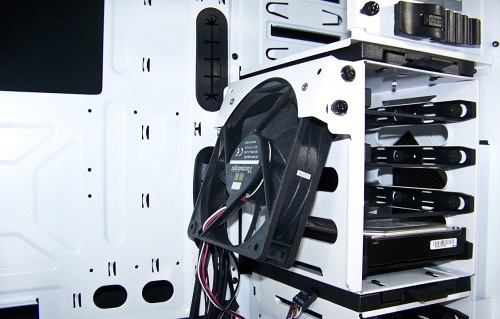 Here, you can see the removable hard drive bay with adjustable shroud with fan along with the tool-less trays with one drive installed. A thumb screw keeps the fan aimed where you like. We’ll touch on this again later in the installation notes. The HDD trays bend and flex easily enough to install any 3.5 inch drive. There’s enough room to face the HDD in either direction. You can hide the cables in the back or flip them around for easy access up front. 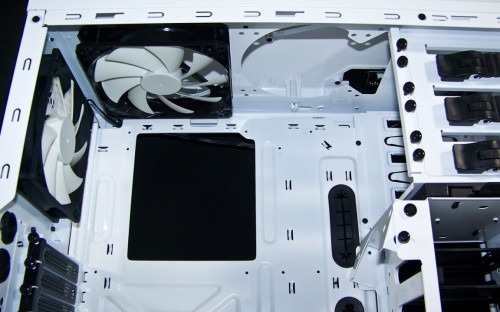 Looking up top, you can see the two 120/140mm fan port cut outs. This is where your dual 120/140mm radiator or fans can be mounted. There’s some extra length too if your rad is a little long. However, if you install too thick a rad, it may or may not hit your motherboard components or memory slots. I suggest you stick with a standard thickness radiator to be safe. 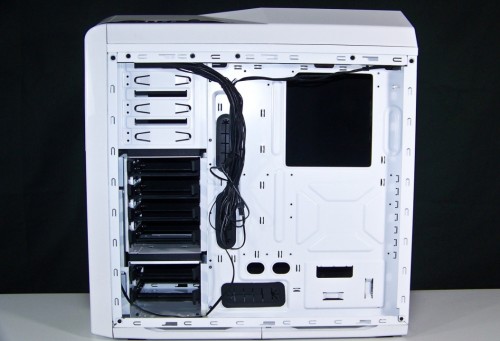 Finally, there’s about 3/4 of an inch (19mm) space between the left side panel and back of the motherboard. The slightly wider frame of the case coupled with the wire management space will make it very easy to hide connectors and cabling. Again, your drive cables can face either direction depending on your preference, but facing them backwards would yield a cleaner interior. Especially now that there is a window for people to check on your cable cleanliness.