Here’s a list of the goodies going inside for the thermal test. It includes the AMD Phenom II X4 965 Black Edition Deneb processor and retail CPU cooler. We’ll also be using a dual GPU GTX 295 this round in place of our usual nVidia 8800 Ultra for thermal tests. Both, the 140 Watt CPU and dual PCB graphics heaters get quite hot during benchmarks. That also means they will get very loud quickly in a poorly ventilated computer cases.

The four temperature probes were thermal taped to components including the back of the VGA card closest to the GPU, top side of the retail CPU cooler, center of the North Bridge Chipset and center of the South Bridge Chipset. The hard drives seem to rarely get warm enough because of the cool air that is drawn directly through the front of the case. The focus will be on the components that do get hot. 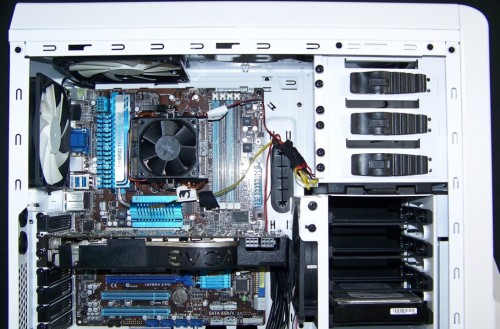 The 8800 GTX Ultra is a very long video card. It just fits inside the case and is within 1/4 inch away from the center pivoting fan shroud. Since the Phantom 410 doesn’t come with a fan installed, it won’t be a problem for most. If you do install one, it’s not going to allow much room to aim the fan. I would like to see this adjustable shroud mounted on the bottom deck instead so it can direct cool air right in to the video card(s). Tooless drive bays make for quick installation.

Wiring is pretty easy to figure out as it’s all labeled properly. Users won’t need to use the manual if the motherboard has labeled ports. The length of the front panel and case wiring is long enough to string behind the motherboard if you want to keep things nice and tidy. Depending on the size of the PSU, users may be able to install the optional bottom fan. My Antec TPQ-1200 for example, is a longer PSU that blocks some of the vent holes. NZXT power supplies are pretty standard in size and will allow for the optional fan without issue.

Finally, there is in fact enough room to install a dual 120mm radiator, or all-in-one liquid cooling system up top. It will require some lengthy machine screws and putting the fans on top of the case after removing the case cap, or reversed depending on your components. An LCS radiator/fan can also be mounted on the back assuming your motherboard doesn’t have any components blocked off.

The system was first allowed to idle for two hours which gives us a good idle average temp. Then, the system was put under load using OCCT while running Unigine Heaven 2.5 demo repeatedly. This taxes the major peripherals and motherboard components. The BIOS CPU thermal control was left at auto. Remember, these are temp sensors and not the internal component temp itself. We also swapped out the 8800 Ultra for the GTX 295 to make it more interesting. 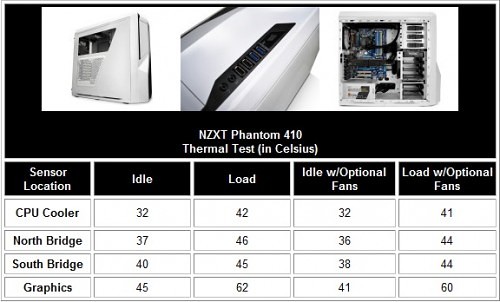 Don’t be alarmed. These temps are from probes making direct contact with heat sinks on the board and PCB of the video card. If these weren’t warm, it would be a good indicator heat isn’t being transferred properly.

That said, the temps here are a little higher than the original Phantom because the Phantom 410 is more compact with less cool air volume, more restricted air flow from drive cages, less intake fans and relatively low RPM fans. However, adding a side panel and/or bottom intake fan does wonders for driving warm air out quicker as you can see by the improvements.

My trusty sound meter is an alright unit for getting noise over 30db(A) calibrated for two feet away. Just the case noise alone was measured first. Next, noise was measured at idle and load. I have four 120mm case fans (16db, 21db, 30dB and 42dB) for noise reference. 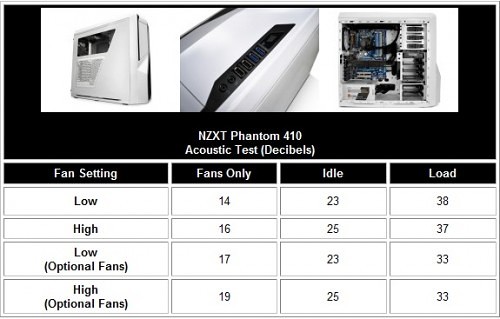 With the fans on low or high, the meter couldn’t detect the sound. I matched up the closest rated fan in the lab to figure out the case averages 16db. Adding more similar rated fans to the case just slightly increases the case echo more than anything. Still, that’s not too bad at all. Once the system is running, you can’t hear the case fans at all.

Idle and Load readings indicate adding the optional fans help drop temperatures which means much less fan noise. The side panel particularly will help any video card that tends to get loud. The case overall blocks about 8dB average. As long as you pick up 16-18dB rated optional cooling fans, you will enjoy the noise drops. Keep in mind that high performance CPU coolers and video cards tend to have better coolers which means lower overall noise. 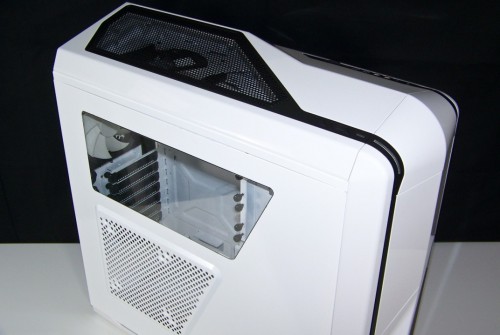 In terms of design, I have yet to meet anyone who doesn’t like the elegant curves of Phantom. However, quite a few users wanted a smaller case with a window to show off their elite components yet with nearly, if not all of the features in the original Phantom. That sounds like a tall order. But that’s exactly what the Phantom 410 offers. If the case come with one more optional fan, it would have been great and one could live with the price at $109 for the increase in cooling performance.

In its basic configuration, the NZXT Phantom 410 is much like it’s bigger Phantom sibling but has a bit less air flow. It does its best work with at least one more fan either on the side or bottom of the case which directs air directly on the system. That alone helps control noisy coolers and drops overall system temps. I recommend you choose where to add the fan based on whether or not you have a long video card and if your PSU allows the fitting of the fan in the bottom.

Along with the shrink in chassis size comes a shrink in price. At $99 US, the curves, features and quality of the Phantom 410 make it one of the top five case designs on the market worth the price. If you’re on hunt for a computer case that will turn heads, has great cooling potential and worthwhile features, I highly recommend the NZXT Phantom 410.