Linksys, a leader in home networking solutions pairs up with Rivet Networks, makers of the high-performance Killer Networking products, to bring to you a high-end gaming specific wireless router with the Killer Prioritization Engine and a slew of other performance gaming hardware.

There is a huge market in high-end gaming to which not only people play games but will do other high bandwidth intensive operations such as talking smack with teammates over VoIP, watching competitors over their various Twitch streams, downloading large sized game patch files, and even live streaming their gameplay in full HD with audio and video commentary.

That aside, there is the rest of the household members who may be watching Netflix or streaming videos of kittens on Youtube. With all these online activities, bandwidth is a hot commodity and as a high-end gamer, you want to ensure that your sessions isn’t going to lag out because your little sister is watching the latest Daniel Tiger’s Neighbourhood on Youtube.

At CES 2017, Linksys announced their latest product, the Linksys WRT32X. 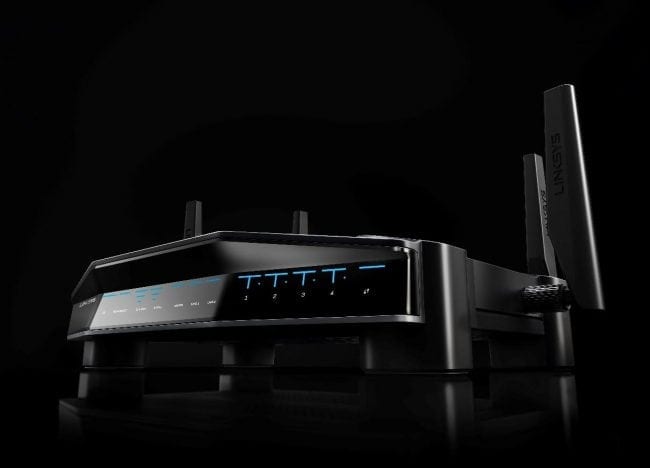 The key features of the WRT32X are

You don’t own a gaming PC with Killer Networking components? No problem, it doesn’t mean you can’t benefit from the Killer Prioritization Engine. Your network will still revel in the higher wireless bandwidth and faster hardware components of the Linksys WRT32X. You won’t ever need to worry about your gaming sessions on a PC or console being held up by someone else in the household watching kitten videos on Youtube.

If you love the Linksys brand of wireless routers and looking for a router that can handle any traffic you might throw at it, check out the WRT32X.  You’ll have to wait until the Spring of 2017 when it will be available and a MSRP of $329.99 CDN.

Playa Vista, CA and Austin, TX – Jan, 4 2017– Linksys®, a leader in home and business networking solutions and Rivet Networks, makers of the award winning line of high-performance Killer™ Networking products for desktop and notebook PCs, today announced at the Consumer Electronic Show 2017 (CES) in Las Vegas, that they have teamed to incorporate the Killer Prioritization Engine into a new Linksys WRT™ gaming edition router – the WRT32X. This first of its kind collaboration will provide serious online gamers the only router that is specifically optimized for gamers with Killer-enabled gaming PCs. The “Killer Prioritization Engine” optimizes traffic for low latency and less lag and ensures that the Killer-enabled PC’s gaming, audio, and video is fast and smooth, while simultaneously managing other online traffic in the home to ensure other devices and activities are not compromised.

Gaming has evolved from a childhood past time to a lifestyle.  More than 60% of Americans game more than 10 hours per week according to Eedar, a leading video game research firm.  Gamers are multi-taskers, not only gaming, but often talking with teammates over VoIP, watching competitor gameplay on Twitch, and downloading a large patch to their favorite game, all at the same time.  Not to mention, friends and family members are also streaming video, downloading iOS updates, or checking their email.  Today’s home networks are more crowded and congested than ever and the gamer wants to ensure their gameplay is prioritized and not affected by other online activities.

“We looked at the router options available to gamers in the market and realized that “gaming” routers were just standard routers with flashy industrial design or packaging provided as “gamer bait”, but offered no real technical substance or innovation,” said Vince La Duca, Linksys WRT series product manager.  “We knew we already had the best and top of the line hardware for gaming on the market with the WRT series; we just needed the right solution to give gamers the competitive advantage in regards to network optimization,  That’s when we started talking with Rivet Networks, makers of Killer networking products.”

La Duca continued, “The Killer Ethernet and Wi-Fi networking products are featured in just about every high-end gaming system on the market. The idea was to create an “end-to-end” solution for the serious online gaming community.”

“Bringing Killer Networking technology into a router was an idea that we had for some time,” said Bob Grim, vice president of marketing and business development at Rivet Networks.  “Working with Linksys to integrate the Killer Prioritization Engine into the WRT32X was an easy decision for us because we know and love the amount of engineering that Linksys puts into its products.  The real winners here are the gamers who will now be able to own a world-class router that is specifically designed to keep their games playing fast and smooth, no matter what else is going on in the home network.”

The WRT32X Wi-Fi Gaming Router, a CES 2017 Innovations Award Honoree, starts with enterprise grade hardware: 1.8 GHz Dual-Core ARM CPU, 802.11ac Wave 2 Dual-band 3×3 with Tri-Stream 160 technology wireless radio, 256MB Flash and 512MB of DDR3 Memory, and 5-port SOHO-grade Gigabit Ethernet switch with TCAM.  For the software, the core firmware level uses the latest stable Linux kernel version for a streamlined and lightweight code base with low latency as the top focus. The secret ingredient and key innovation is the integration of the Killer Prioritization Engine.  Finally, a customized Graphic User Interface (GUI) is used to promote important network settings for gaming, provide Internet usage statics, and its wrapped in a design that appeals to gamers while matching the edgy design of the WRT hardware.

The WRT32X Wi-Fi Gaming Router allows gaming PCs to have fast and smooth gaming experiences even when there is network contention on the home network, as the devices in the home compete for bandwidth. The entire home network will benefit from the Killer Prioritization Engine – a unified and automatic solution for bandwidth contention between the Killer PC and the WRT32X.  Internet traffic from the Killer PC is managed to ensure game play is top priority with audio and video from the Killer PC as second and third priority while bulk download, such as large game patches are set to a lower priority so they don’t negatively impact other devices in the home who may be surfing the web or enjoying a blazing-fast Netflix video stream.

Exclusive to the WRT32X is Rivet Networks’ “Killer Prioritization Engine“:

The new Linksys WRT32X Wi-Fi Gaming Router is planned for availability this spring in leading retail and online retailers globally for an estimated MSRP of $329.99 CAD.

Rivet Networks is a technology and products company that focuses on creating the best possible networking experience. Rivet offers a mix of hardware, software, and cloud-based technologies to deliver solutions that are both powerful and intuitive. Through their Killer™ line of networking products, Rivet Networks offers unprecedented speed, intelligence, and control for gamers and performance users alike. For more information about their Killer brand of technologies, please visit www.killernetworking.com.

The Linksys brand has pioneered wireless connectivity since its inception in 1988 with its leading innovation and engineering strategies, and best-in-class technology, design, and customer service. Linksys enables a connected lifestyle for people at home, at work and on the move, and with its award-winning products, simplifies home control, entertainment, security and Internet access through innovative features and a growing application and partner ecosystem. For more information, visit linksys.com, like us on Facebook, follow us on Twitter or watch us on YouTube.

‡Maximum performance derived from IEEE Standard 802.11 specifications. Actual performance may vary, including lower wireless network capacity, data throughput rate, range and coverage. Performance depends upon many factors, conditions and variables, including products used, interference and other adverse conditions. In order to achieve the best performance, this router must be used with a compatible AC2600 wireless device. Specifications are subject to change without notice.  An active, customer-purchased Internet Service Provider broadband account is required for connection of these routers and other connected computers and devices to the Internet.  Some devices may require additional wireless adapters or an Ethernet cable to connect to these routers. May require a software/firmware update available for download at linksys.com/support.

** The standard transmission rates—2600 Mbps (for 5 GHz) and 600 Mbps (for 2.4 GHz)—are the physical data rates. Actual data throughput will be lower and may depend on the mix of wireless products used and external factors.

© 2017 Belkin International, Inc. and/or its affiliates. All rights reserved.

BELKIN, LINKSYS, WRT and many product names and logos are trademarks of the Belkin group of companies. Third-party trademarks mentioned are the property of their respective owners.