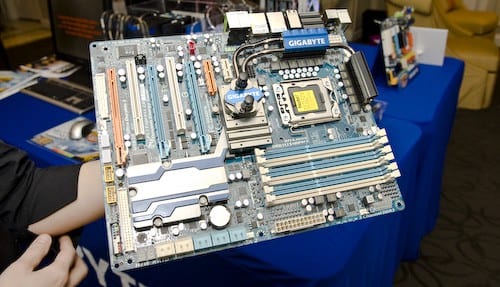 When you think of GIGABYTE, you probably think of those LEGO-Like motherboards that happen to be extremely well built under the pastel colors (they’re about netbook tablets too now, but in more subtle colors). At CES 2009, the company made it very clear that they were more than just about motherboards by participating in a large number of community events at this year’s show (I can hardly believe that the show only ended about a week ago).

From industry parties to charity events to overclocking competitions, GIGABYTE was front and center with a show of force that other manufacturers should really be taking note of. In an economic downturn, you definitely don’t want people forgetting about you and it was clear that no one is forgetting about GIGABYTE after all the love they’ve shown during the week of CES.

The Night Before CES Party 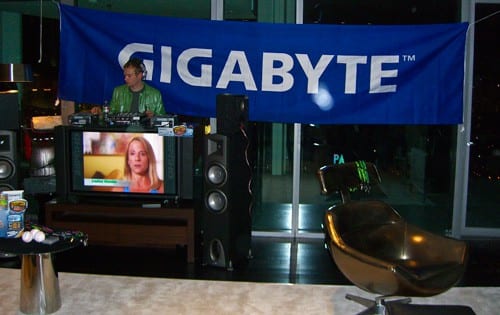 The Futurelooks hosted “Night Before CES Party” was sponsored by both GIGABYTE and REDUX. REDUX provided the atmosphere, while GIGABYTE provided the refreshments. The combination provided industry professionals and invited press/media an opportunity to relax and network before the big show began the next morning. The event was mentioned in the local Las Vegas Sun Newspaper and it was reported that over 100+ extra people tried to crash this invited only event. The video below shows what those people missed out on:

The GIGABYTE staff were on hand to answer questions on their new innovations and what they had coming up for 2009. Everyone had a great time and everyone appreciated GIGABYTE for buying the drinks. More pictures of this event are available here and here.

This awesome event for charity has been taking place for over thirteen years and every year Futurelooks eagerly anticipates the opportunity to race again. The reason why this event is so popular and dear to our hearts is because the proceeds of this event is strictly for charity, with prizes of up to $10,000 for the winner. However, there would be nothing to build if it wasn’t for the sponsors and GIGABYTE was one of them.

The company generously donated a number of their new GA-MA790GP-DS4H motherboards which feature support for the AMD Phenom II X4 Processor and the new AMD Dragon Platform, for the competition. The upcoming GIGABYTE Ultra DurableTM 3 Classic AMD Motherboard lineup with the support of Phenom II Processor is scheduled to launch by end of January, 2009 and we were honoured to have a crack at them under race conditions. Here’s a short video of this exciting event:

Despite the fact that we were not able to best our 2nd place performance from Last Years’s event, everyone still had a good time and it feels good to do something for charity. The system featuring the GIGABYTE board will be donated to Futurelooks’ charity of choice which is the BC Children’s Hospital.