When computer folks talk about micro-ATX, it’s rarely ever an exciting subject. That’s because m-ATX systems have rarely ever thought of as a performance option with the only exception being the ASUS Republic of Gamers X58 Rampage II m-ATX motherboard. However, we now realize that the biggest and baddest computer system isn’t always required to play the latest killer video game, handle the office daily work loads, enjoy the perfect home theater experience or all of the above. In fact, we’re going to have a look at the three popular micro-ATX solutions to show you that this is true. They include the ASUS P7H55D-M EVO, GIGABYTE GA-H55M-USB3, and MSI H55M-ED55 motherboards.

Since, we have a sizable group of features to cover between the motherboards, we’re going to give you the obvious summarized spec features up front in this little table. Don’t let the talk of more than one PCIe x16 slot mislead you. None of the platforms support SLI as do some of the X58 m-ATX motherboards. The only board that does offer dual GPU capability is the MSI H55M-ED55 motherboard, but in CrossfireX only. 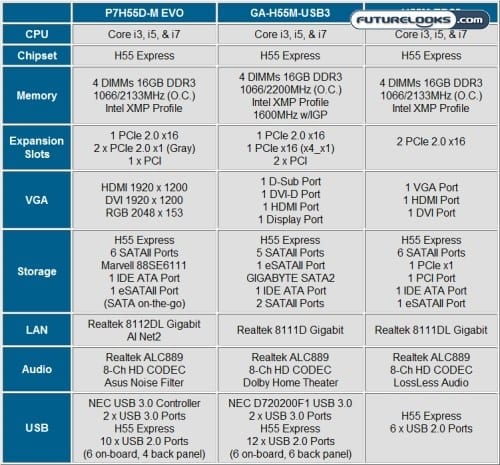 The things we would like to note is that both the ASUS and GIGABYTE both support SATA3 and USB 3.0 devices where as the MSI does not. We aren’t sure why MSI has decided to omit this feature in their H55 boards. Perhaps they opted not to support them since those devices still aren’t quite mainstream yet. However, as a mainstream user, we always shoot for the latest features and this could seriously hurt MSI in the long run.

Now, let’s cover the extras hidden underneath all that cool looking tech. Some of these features are software and some are hardware. Let’s proceed in alphabetical-ish order. 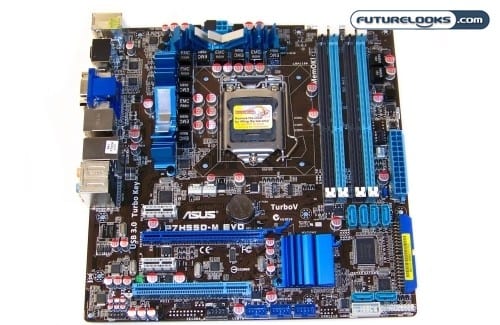 The big features that will impact your experience with this board is ASUS GPU Boost, TurboV, Turbo Key, MemOK!, and DDR3 overclocking support up to 2133MHz assuming your memory can keep up. GPU Boost automatically overclocks your CPU’s integrated graphics processor in real time as the system demands. It takes care of everything automatically for you. 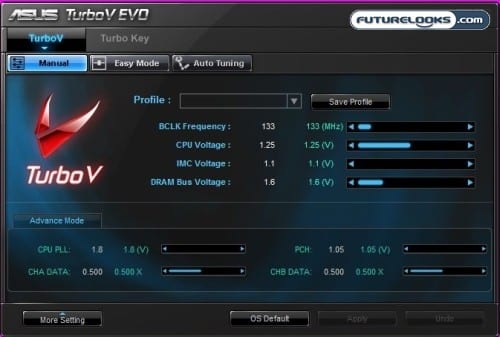 TurboV is currently the most aggressive and stable overclocking software that any motherboard maker offers. We’ve seen quite a few TurboV friendly motherboards over the last year that were impressive to say the least. The question we’re interested in answering is whether or not the EVO moniker means we can expect something similar in testing. The P7H55D-M EVO’s 8+3 phase power that will support TurboV the most. The two biggest benefits of more phases is better power management and system stability. Before you go thinking 8 phase isn’t enough, it wasn’t too long ago that we saw top end boards with this feature still manage overclocks of 4.5GHz or higher. More of an enthusiast feature of course, but nice to know that your mainstream board has some thoroughbred blood.

Turbo Key allows a user to program, or bind a button on your keyboard that overclocks your system also on the fly. This comes in pretty handy if you need an extra boost while gaming or working. Just press a key and get a sudden frame rate boost.

MemOK! hints to its ability in the name. If you just installed some memory or tried overclocking the memory, a quick press of the button automatically reconfigures the BIOS to settings that allow the system to boot. Of course, if all else fails, you can clear the CMOS. If for some reason you ever experience a BIOS error, you can use CrashFree BIOS 3 via a USB flash drive to reload the BIOS.