The Intel Core i7 is the current king of the desktop performance market and shows no signs of slowing down. At present, the Core i7 processor is the superior number crunching executioner of choice compared to any other CPU solution to cross this test bench to date. This success would be for naught without the X58 platform which currently solely supports it.

In case you haven’t been following the industry closely, Intel is the only chipset producer that supports the Core i7. Pending legal matters have kept nVidia out of the game. While analysts would say this is why the ICH10/X58 has done so well in the market, we technicians know that it’s the chipset’s stability, reliability, overclocking prowess, and its array of features that actually make it “the choice”.

Today, we have another motherboard that is hoping to be worthy of supporting the Intel Core i7. Introducing, the ECS Black Series X58B-A “Nehalem” Motherboard. 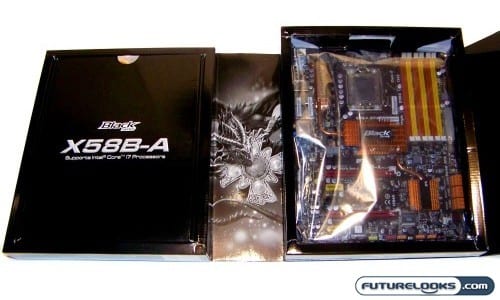 New features found on the motherboard include a Reset, Power, and CMOS button right on the PCB. These come in handy if you like to use unorthodox enclosures or modified cases. The CMOS clear button is definitely a plus especially since we will be taking the Motherboard Intelligent BIOS (M.I.B.) for a spin to see if the platform does indeed overclock.

Some other features include 6-Phase power management which is VRD11.1 compliant. Power consumption is one area that manufacturers haven’t been able to cut back on as the X58 system is absolutely a performance based platform. That means there’s not much that can be done other than some fine tuning. It’s the job of ECS’ QoolTechII Heat Pipe heat sinks to help cut down on the thermal issues associated with the performance.

Though ECS’s main product page only mentions CrossfireX in the features section, this particular board does indeed support nVidia SLI as well. You won’t need to update the BIOS or jump through any hoops to get two GTX 285 graphics cards online and start destroying any opponent in your path. A later “A2 Revision” will delete this feature, but since ECS never said it officially existed in the first place, then it really isn’t a loss if it isn’t there later. Just FYI.

There is something to be said about nice product packaging. ECS marketing went out of their comfort zone just a bit compared to what I’ve seen in the past. It’s been interesting to see where ECS has been going with the “Black Series” theme. 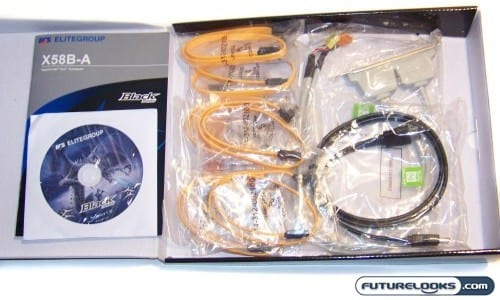 The box opens up in such a way you’re presented with a peak at the motherboard on one side and the bundle on the other. You’ll find a cool graphic displaying a dragon with its jaws locked on to a crest in the center.

Inside the bundle box, you’ll find a manual, CD, 6 x yellow SATA cables, black eSATA cable, and I/O PCI bracket. All of the SATA cables are a welcome sight since the board doesn’t offer any ATA ports. That’s one nice thing about going Core i7 and X58: No more antiquated IDE drives or flat ATA cables!