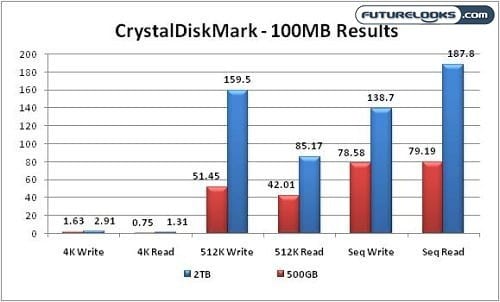 For a little extra credit, CDM helped further demonstrate the Caviar’s recent improvements. A smaller plattered 500GB Seagate drive was tossed in the mix against the 2TB running both 100MB and 1000MB benchmarks. 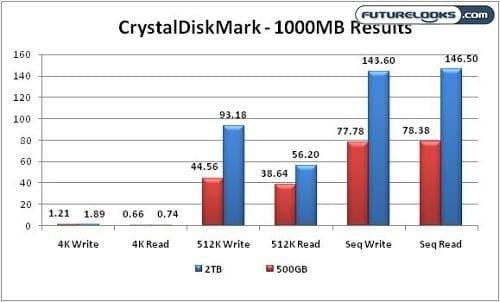 Note the 4K data block performance. This has an effect on your system’s response time when writing and reading files during use. The 2TB basically doubles the performance of the 500GB drive especially in Sequential tests. And, it gets close to doubling the 512K and 4K rates as well.

If you were wondering whether or not features like Stable Trac, 64MB Cache, and Dual Actuator Technology would pay off, this should easily answer the question. About the only thing left to do is add some more RPMs and the series would rock like a Velociraptor, but with far more storage. 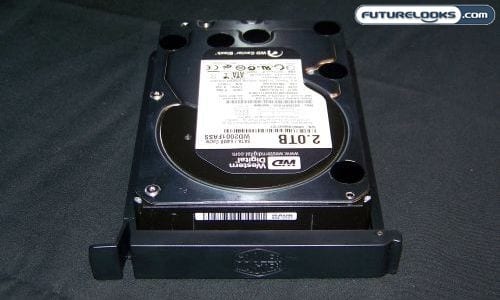 When all the drives stop spinning, there are a couple things that literally feel better when testing the Western Digital 2TB Caviar Black Edition Hard Drive. For one, both the Caviar Green and Black drives operate at much, much cooler temps of around 40C. Drives from competitors can reach a whopping 58C which can shorten the life of a drive and heat up a system.

Along with heat, vibrations in server arrays can adversely affect the life of a hard drive. Combined with heat, this can seriously stress tightly packed components. The Caviar Black was very smooth and quiet during its repeated abuse. This should help ensure that the extension to a 5 Year Warranty is just the bare minimum amount of time you’ll have these drives around and put the minds of few admins at ease.

The bottom line here is that the Caviar Black series offer an impressive level of performance compared to previous generations as well as afford you a great deal of storage capacity relatively cheaply. Having assembled many a server and home theater systems, the 2TB Caviar Black is worth every penny.