Search
Home
Reviews
TP-Link Deco M9 Plus Mesh Wi-Fi System Review
Looking to cover a larger square footage with a reliable Wi-Fi signal, the TP-Link Deco M9 Plus can do that and support your SmartHome devices.
Pros
Cons
2018-11-26
9.5Overall Score
Prev3 of 3Next

When it comes to Wi-Fi and Network performance, a lot of the routers out there on today’s market will be similar. The TP-Link Deco M9 Plus is an AC2200 based Wi-Fi router whereas the previous Deco M5 is an AC1300 router. AC2200 means that the router is capable of combined theoretical speed of up to 2200 megabits per second (mbps), where the three separate signals are 400 mbps + 867 mbps + 867 mbps, rounded up.

In the case of the TP-Link Deco M5, I was able to place each unit on a separate floor (we had access to 3 stories) but with the TP-Link Deco M9 Plus I only have access to 2 stories. Both TP-Link models were able cover up to 4,500 square feet. The TP-Link Deco M9 Plus with its larger footprint and 2 more antenna per unit is able to cover more. If you truly needed more coverage you can purchase another Deco unit, either another M9 Plus or M5 would be suitable, and add it to the network via the mobile app.

To give a rough estimate of network performance, I placed both TP-Link Deco M9 Plus units on the same floor on either side of the building. When I walked around the main unit (closest to the modem) my network speed would average 394.3 mbps. When I moved over to the remote unit, my network speed dropped and would average 191.8 mbps. Walking up to the second floor and leaving the units on the lower floor, the network speed averages would drop again, but were still usable.

I then moved the remote unit upstairs and the networks speed averages went up while walking between the two units. It is possible that the room where the remote unit was located previously had construction material that may have interfered with the Wi-Fi signals. Moving the Deco M9 Plus unit to the second floor (so each floor had one Deco unit), I was able to maintain an average network speed of 334.2 mbps with peaks hitting above 400 mbps. 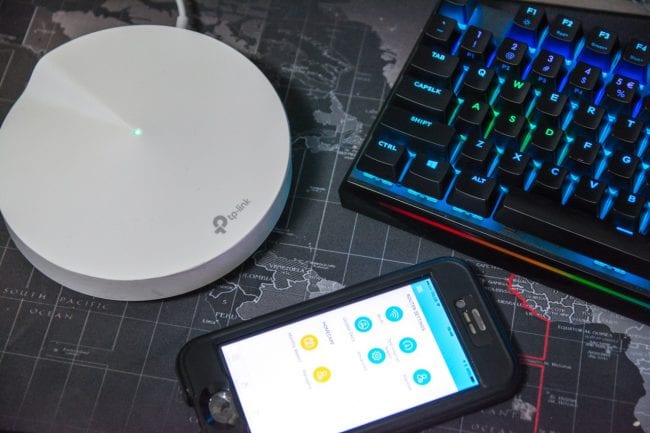 I have been using the TP-Link Deco M9 Plus for a while now and it performs where I would expect it to. I have also used it in both modes that it supports which are Router & Access Point. In Access Point mode, I utilize the Deco M9 Plus like a wireless back-haul, allowing me to expand my wired network into a room that cannot have a wired drop connected to it.

Setup of the TP-Link M9 Plus is the quickest and the simplest of any Wi-Fi routers I have used to date. Download the iOS or Android app, plug in one unit, and with a few decision on the app, it essentially sets itself up for use. The Antivirus feature of the TP-Link Deco series is great for those who want an easy way to ensure all their connected devices are protected from security threats. While this does not make up for anti-virus software on your computers, it does provide something where traditionally nothing was there to assist.

Performance of the TP-Link Deco M9 Plus is good and will not hinder the typical users experience. I’ve been using it for playing PC games, streaming to Twitch, while also watching Twitch Streams, all at the same time. My game play experience was never affected in any noticeable way. I did notice a bit of a drop in network speeds walking between the units, but the hand off between the two TP-Link Deco M9 Plus units was flawless. Under regular operation, this is totally not noticeable.

As mentioned, the Plus in the name adds in support for the Zigbee protocol or other Internet of Things (IoT) devices. Since I do not have any Smart Home items, I wasn’t able to test this feature set out thoroughly. But at least I have the option to make my home smarter in the future and have support. The TP-Link will even work with the Philips Hue product line, which can also tie into systems like ASUS Aura or Razer’s Chroma on systems.

Overall, I have enjoyed using the TP-Link Deco M9 Plus and would recommend it to anyone looking for a simple to setup Mesh Network solution that just works with little to no user intervention. This is clearly not aimed at power users looking for more options, and TP-Link does have those options available in their product line too. The TP-Link Deco M9 Plus is available for around $299 US.

Prev3 of 3Next
Share This With The World!
2
2
Shares