One main feature of the Synology DiskStation DS216+ is the ability to transcode video streams on the fly with the help of hardware encoding. To check out how this works I made use of the two locations we typically stream video to in our home; the living room and a bedroom.

The living room has a Sony PS4 connected to the home network via Gigabit and movies and TV shows are streamed from the DS261+ via the Synology DSM apps Video Station and Media Player. Previously with the PS3, MKV files were not supported and the DS216+ has the hardware capabilities of transcoding them to a format the PS3 can handle. Though since the introduction of the PS4, most video formats are now supported natively. Browsing to the DS216+ was as easy as loading up the Media Player app on the PS4 and selecting the correct device.

The back bedroom's TV has movies and TV shows streamed to it (wirelessly) via a Roku 3. Now, the Roku isn't as forgiving with what video files it supports and I've spent a bunch of time reformatting video files to allow the Roku to play them properly, or actually to even acknowledge the existence of them. With the introduction of the Synology Diskstation DS216+ to our home, I have not had to worry about formatting issues as the DS216+ handles the transcoding without issues.

It was mentioned that the DS216se would be used a bit as a comparison. Over the course of the two weeks that the Synology Disktation DS216+ has been sitting next to the Synology BeyondCloud (DS216se) there has been some noticeable differences in performance. These differences in performance can be attributed to the fact that the DS216+ has a dual-core Intel Celeron running 1.6GHz with 1GB of RAM where as the DS216se runs a Marvel ARM processor at 800MHz with 256MB of RAM. Not really an apples to apples comparison.

When doing daily tasks on the DS216se it is easy to pin the CPU at 100% utilization (accessing the web UI, files transfers to and from etc). Those sames tasks that pinned the DS216se's Marvell Armada ARM-based CPU,  only got up to at most 15% CPU utilization on the DS216+. What does this mean? A lot of the tasks that are done day to day on the DS216+ can easily handle other things thrown at it throughout the day. Noticeable was the use of Photo Station both on the web version as well as the mobile version. The photo albums in Photo Station are displayed much quicker on the web version. This included the generation and display of thumbnails (which are created when photos are added to /photo or even /video) as well as the rendering of the full-sized images themselves.  Viewing the photos on a mobile device was almost instantaneous with the DS216+ over the DS216se.

A co-worker asked me about the sound of the DS216+ when it was under a heavy load or spinning up or down from hibernation. It sounds like their NAS drive (a different manufacturer) sounds like a jet-plane starting its engines on takeoff. As with the DS216+ there wasn't any significant noise under any circumstance that was ever noticeable.

For those who dislike blinking LEDs from devices, especially at night. A neat feature of the DS216+ is the ability to dim the LEDs all the time or during certain times of the day.

We haven't mentioned the included eSATA port on the back of the unit yet nor have made use of it and we're looking quite forward to utilizing this with an external 5-disk RAID array that is collecting dust in the corner.  Being able to utilize that RAID enclosure by attaching it to the DS216+ via eSATA will be something we'll look at to the future.

What would I change? Going from the Synology BeyondCloud Mirror (DS216se) to the DiskStation DS216+ there is not too much I would change. I would have liked to have seen the two USB 2.0 ports on the back updated to USB 3.0 as a lot of the external drives that are laying around the house are USB 3.0 these days. Perhaps a bit more memory (RAM) in the device. The DS216+ has 1 GB of DDR3 and the underlaying system is 64-bit based so it could handle a lot more.

There is an article out there on the web that explains that you can upgrade the RAM but it will void your warranty and is not the easiest to do (ie go slow and be careful when removing portions of the chassis). They did manage to find a stick of 8GB DDR3 Crucial that would be recognized by the DS216+. Perhaps down the road I will look at voiding the warranty and installing 8GB of RAM as I could see a benefit of adding more to the DS216+. 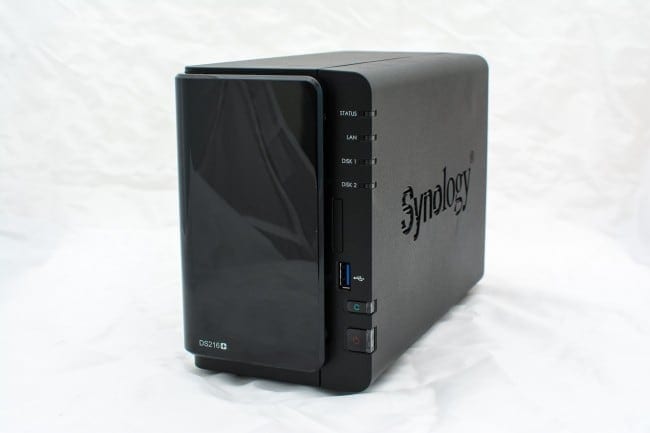 I believe that the Synology DiskStation DS216+ is definitely a NAS solution a home or small office environment. It would perform well and keep up with daily tasks. The small footprint, easy setup and use make the DS216+ a great experience.

The 2-bay design allows for a lower cost, but some redundancy for your data. With the hot-swappable tool-less design for the hard drive cages, it allows for easy removal and insertion of drives if you ever experience a failure or need to upgrade to larger sizes. Someone once mentioned recently there are 2 states for hard drives; dying and dead. Being able to easily access and replace drives is a great feature.

Those who want a bit more out of a NAS solution can easily make use of the DiskStation Manager (DSM) environment to download and run applications such as Video Surveillance, a Git Server, or an Audio server.

The ability to easily upgrade the RAM would be a nice feature also but that would take away from the DS716+ which is the quad-core model with 2GB DDR3 onboard. It also has the ability to add 5 more drive bays via an expansion unit. However, the Synology Diskstation DS216+ does have that eSATA port we mentioned which could fulfill a similar purpose.

It is really hard to say anything negative about the Synology DiskStation DS216+. In fact, the only two negative things that can be said about this particular NAS product is that the RAM is untouchable by regular users and the lack of USB 3.0 ports. Other than that this unit comes highly recommended.