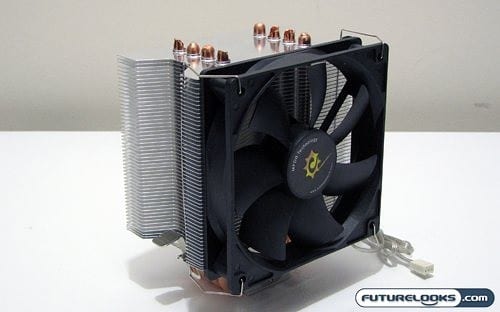 To test the Sunbeamtech Core Contact Freezer CPU cooler, we installed it into a system made up of the following components:

For thermal interface material, we used the included Tuniq TX-2 thermal paste in all tests. The fans on the Lian Li case were then set to medium, representing the best performance to noise ratio for that case. To push the CPU to load conditions we used a program called OCCT, which can produce 100% load in a CPU across all cores.

First up is the thermal tests, and upon first glance the Core Contact Freezer faired extremely well, especially at the high fan speed. It’s a no-brainer that it beat the Intel stock cooler. 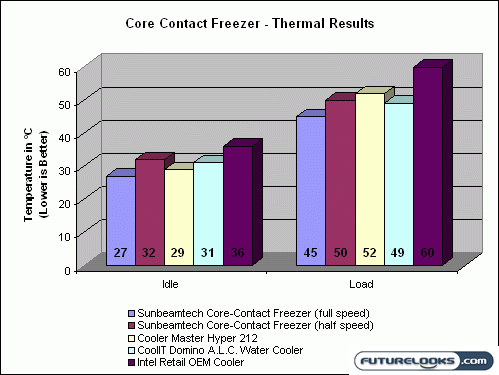 At 100% load it also took the cooler which I’ve used in all my non-cooler reviews, the Cooler Master Hyper 212, to school. Medium fan speed was a little more mixed, with the Core Contact getting beaten ever so slightly at idle by everything that wasn’t the Intel stock cooler. At load on medium speed the Core Contact was only beaten by the water cooler, and that was added to the mix just because the Core Contact was being so cheeky. Really this cooler is hands down an excellent performer for the price. 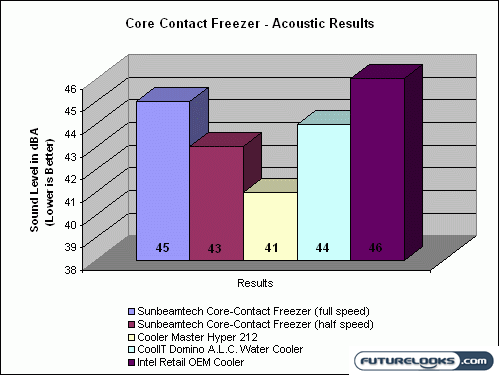 Acoustic tests are a little more difficult to judge. Sure we have some empirical numbers to use in our results, but there’s also a subjective aspect to it. With that in mind, I have to say that the Core Contact Freezer is a very quiet cooler for what you get. The Cooler Master Hyper 212 ended up the quietest here, but it’s also a low powered fan that’s meant for near-silent cooling instead of overclocking. For a cooler that is meant to be used in overclocking, the Core Contact Freezer is quite quiet when you look at the numbers.