On first glance the Sunbeamtech Core Contact CPU cooler looks like a fairly non-descript tower cooler, not unlike the Cooler Master Hyper 212 we reviewed a while ago. It has four heatpipes going up from the CPU socket to the top of the tower. Cooling is handled by a 120mm variable speed fan, which is clipped onto the front of the cooler. These spring clips are used instead of screws to keep the fan quiet and mount it easy easily and economically as possible. This saves Sunbeamtech from having to implement some sort of retention bracket that will interfere with cooling, and allows you to install any fan of your choice if you don’t like the included one. 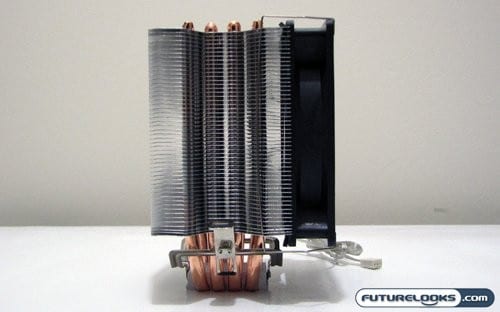 Here’s where we start see some differences from the average tower cooler start to appear. The Core Contact Freezer has a lot of fans to cool those heatpipes. These fins span the entire width of the cooler without a gap, and are quite deep as well. Even the lower fins are angled in such a way to cool any motherboard hardware residing between the CPU socket and rear ports. 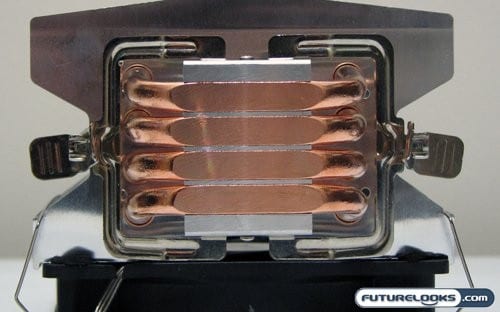 The bottom of the Core Contact Freezer could effectively be called the business end of this cooler, cause it’s where things get done. This is what, according to Sunbeamtech, separates this cooler from all the other coolers out there. They say that because of this style of interface the Core Contact should be able to outdo a large selection of coolers out there. Once we get it mounted, we intend to put something behind these claims. Speaking of which, the single mounting clip shown should work for all modern CPU sockets.

Since the CPU in my AMD test rig produces more heat then the CPU in my Intel rig, I would have preferred installing and testing the Core Contact Freezer in the AMD rig. However when I went to install it into that rig, I ran into one large problem. It would appear that the attached mounting clip wasn’t quite a match for the length of the AM2 mounting bracket. 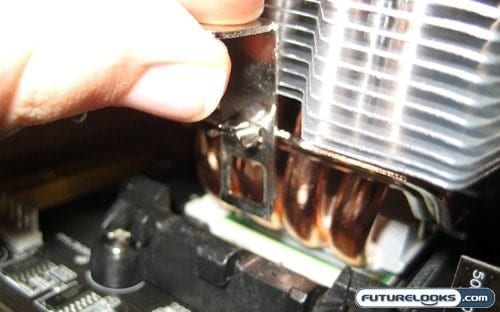 What happened was when I went to press the clip down to secure the cooler, it was missing the little retention bracket hook by millimetres. This was compounded by the fact that the clip was pushing up against the fins of the cooler, not allowing it to make that extra stretch and clip down. This wasn’t a matter of a lack of force, as it was a matter of a physical impossibility. One object cannot physically occupy the same space as another object at the same time, especially when that object is made of a dense material like metal.

When I contacted Sunbeamtech about this, they sent me another cooler, and the problem was the same. The clip is undersized and simply will not fit on an AM2+ socket. Needless to say I had to move over to my Intel platform. Installation on that was a breeze, and I was done in about 30 minutes. No love for AMD I guess? With that, it is time to move on to testing.