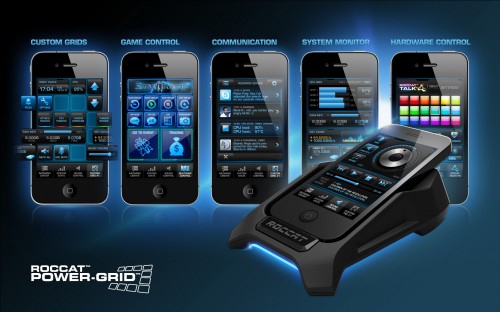 ROCCAT has been on a mission to shake up the status-quo when it comes to gaming options. They continued that mission this year at COMPUTEX 2013 and are ready to take the next step with the BETA version of the ROCCAT Power-Grid, which is software that turns your smartphone into something more. Something that actually helps your PC gaming experience. In fact, it’s available for you to try out right now in a limited time open BETA.

As a refresher, ROCCAT officially unveiled the products at COMPUTEX 2013. With the help of a stand (but you can use it without it of course), the Power-Grid software turns your your iOS or Android smartphone into a all-in-one secondary computer command center. Power-Grid allows you to expand your game controls, use it as a dedicated map, monitor your computer functions while you play, use it as a remote control, and much more. You can literally do anything with it if you want to code for yourself via their SDK. But we should expect Apps to appear for most popular games at launch. There is currently no mention of tablet support for Apple or Android, though you can probably run it anyway in compatibility mode.

Below is a full press release and a video to show you all the great options ROCCAT Power-Grid brings to you. I would download the software and give it a try, but I am Windows Phone user so I get left in the cold. I would really love to use this with Battlefield 4 so hopefully Windows phone gets included in the final release.

October 22, 2013 – ROCCAT’s highly acclaimed Power-Grid app is now available to the public for free download as the software reaches its open beta phase. The game-changing software consists of a smartphone app, which runs on iOS and Android devices, and accompanying host software, which runs on Windows. This technology is used to turn the smartphone into a sophisticated, fully customizable remote control for the PC, extending the environment of the gamer onto their smartphone. Power-Grid features countless preset Grids and Controls that offer functionality ranging from adjusting Windows settings to executing in-game macro sequences in popular games such as StarCraft II and League of Legends. The software also provides gamers with the ability to create their own extensively configurable Grids and Controls, allowing them to cater to their own specific needs and desires. The new Power-Grid website – launched simultaneously – provides a database for those searching for additional Grids and Controls. The database will feature ROCCAT as well as community content, the latter being facilitated by the launcher software’s easy-to-use Grid and Control import/export process.

ROCCAT CEO and founder René Korte comments: “Power-Grid opens up a whole new world of opportunities for PC gamers. Finally you are able to connect your smartphone to your gaming environment – it just feels natural and makes perfect sense. Forget about inflexible solutions like keyboards with integrated displays; create your own command center and benefit from this innovative ROCCAT technology.”

Power-Grid uses WiFi to connect the smartphone to the PC. This means that commands from the phone are executed on the PC in real time. Information from games and software can be displayed on the smartphone, too, meaning it can also be used as an effective second screen. In order to empower the full potential, ROCCAT provides a SDK for Power-Grid. “Professional developers and studios will make use of this just like ambitious amateur coders”, say René Korte. “At GDC Europe this year people were amazed by the possibilities and openness of Power-Grid and its SDK. A lot of creative minds out there will do a lot of unseen things with it – and so will we.”

The duration of the open beta is not defined yet. ROCCAT will implement new features and optimize the software based on the user feedback.

Power-Grid does not require any ROCCAT hardware in order to be used, the only prerequisite being an iOS or Android smartphone. 2014 will, however, see the company release a new range of gaming peripherals designed to benefit from the rich features offered by the app.