Following in the theme of looking good, the Razer Mako comes with a unique touch-sensitive control pod. This is used to control every aspect of your audio system, like adjusting the volume, bass, selecting the input line (there are two), and mute.

Because it has a glossy black finish, like so many other touch-sensitive devices, the top of the control pod can be a bit of a fingerprint magnet. I also found that it wasn’t as responsive as it could have been, but this appears to be an issue with touch-sensitive controllers in general. That’s the price you pay for such a svelte appearance.

There is a rubber “grippy” texture to the bottom of the control pod, ensuring that it doesn’t suddenly go sliding off of your desk. The same grip can be found on the base of each of the speakers; coupled with the distinct weight of the speakers, you can be sure that there is absolutely no “rattle” when you decide to dial up the volume a notch or three. 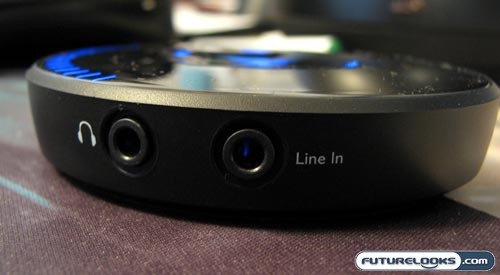 For added convenience, you’ll find two additional ports on the control pod itself: headphones and line-in. Audio sources connected to this line-in port override anything coming through the two main lines (which are found on the back of the subwoofer). This is evidenced by the blue-lit indicators on the top of the control pod: both the Line 1 and Line 2 indicators turn off when something is connected to the direct line-in.

All these great looks and added functionality would be meaningless if the $399.99 Razer Mako speaker system didn’t perform in the audio department. Thankfully, it comes through with flying colors and absolutely blows away any other 2.1 system on the market. The omni-directional speakers provide an absolutely crisp and clean sound that is unparalleled in this segment. The subwoofer rumbles and pleases without giving off any unpleasant vibration or rattle. The bass is just strong enough to shiver your heart.

One thing that you should note is that these speakers need to be placed on a flat surface in order to work properly. That’s because they incorporate THX Ground Plane and THX Slot Speaker technologies. The mushroom-shaped speakers actually fire downwards, using the flat speaker as a means to spread the sound. This eliminates distortion caused by the “desk-bounce” phenomenon with normal speakers. In this way, the Mako is much better suited for shelves and desks than it is for speaker stands and mounted on the wall.

Razer worked hard to get the hard-to-attain THX certification, and the resulting quality really shows. There is no way that you are going to appreciate the Razer Mako with slow-moving ballads or daytime talk shows. However, when I decided to pipe Kanye West’s “Stronger” from my iPod, the whole room filled with energy. I was also particularly pleased when I played “Go with the Flow” by the Queens of the Stone Age. Playing Medal of Honor 2: Heroes on my Wii with the Razer Mako was a thoroughly enjoyable experience too. The gunfire is crisp and the foreboding music really set the mood. The Mako easily handles both the highs and the lows.

In terms of numbers, each of the satellites pumps out 50 watts, whereas the subwoofer shakes the room with 200 watts of power. These are RMS figures and not max outputs.