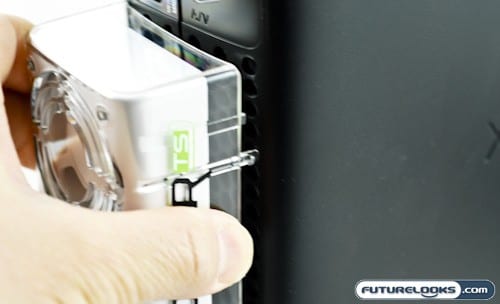 Installation is a breeze. You just need to squeeze the Intercooler TS where the tabs are located (there are two pairs) and then push it onto your Xbox 360 console. Although our review unit doesn’t match our Xbox 360 ELITE, it will match your common garden variety white Xbox 360. NYKO has responded by releasing a more color coordinated version to match your ELITE goodness.

Although installation was easy, removal of the unit was a little more tedious. The tiny tabs almost met their end a couple times as I tried to squeeze the Intercooler TS off the system. This can be even more tedious if the tabs become brittle due to exposure to the heat of the system over time. However, this is one of the items that you do tend to leave on once you install it so it shouldn’t be an issue in most cases. The smaller size of the TS does allow easier installation of the USB WiFi adapter over its predecessors.

Two areas that seem to be nuissances for any of the cooling systems for the Xbox 360 are cooling performance and noise levels. Since there is no temperature monitoring software on the Xbox 360, it is difficult to say if there was any measurable drop in temperature. However, common sense dictates that any airflow is good airflow and the Xbox 360 is one console that needs help to avoid the dreaded “RROD”. 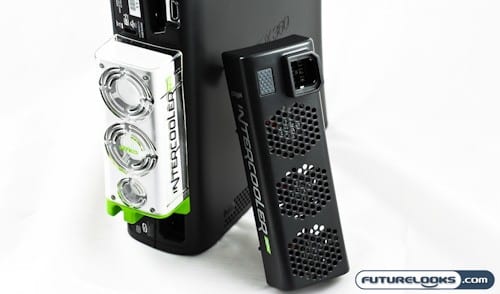 To its benefit, the noise, though louder, wasn’t quite as annoying as my original Intercooler EX. The TS had a slightly higher pitched “hum” to it, while the three fans on the EX had more of a noisy “whir” to it. It is somewhat disappointing that even armed with a temperature sensor, the TS is still on all the time. I guess that’s more of the fault of the Xbox 360 for being such a furnace.

I was expecting to finally have peace and quiet when doing not so system intensive things like listening to music or watching a video on my Xbox 360. This is one of the things that really annoyed me about the original Intercooler so I was kind of stunned that even with the fancy temperature sensor, the Intercooler TS still wouldn’t shut up. However, to its credit, the noise is somewhat more bearable, despite being measurably louder and it makes me feel better knowing that there is improved airflow in this design.

Like most NYKO product, the Intercooler TS is well built and definitley a step above in quality when compared to other generic cooling solutions out there. Though the noise battle continues, I can’t blame this product too much. In fact, the constant ON state of the fans may be telling of just how hot your Xbox 360 is really running. Imagine if there was no extra airflow.

At a reasonable $24.99 US MSRP, this product may be your last line of defense against the dreaded “Red Ring of Death” or “RROD”. I’d definitely pick one up if you don’t already have one of the original Intercoolers.