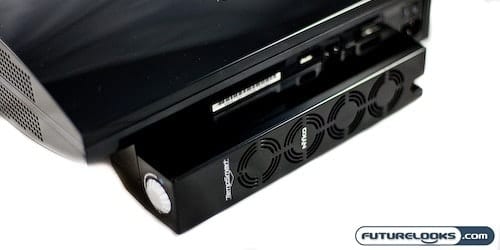 My PS3 is stored in the open air and doesn’t get very hot to begin with so I had to make a serious effort to get the Intercooler TS to go to the max setting. I had to put it in an enclosed section of my home theater to get it to heat up enough. This effort alone makes me question whether or not this device is even required. Granted, it probably does help a tiny bit when it is called into action, but I’m not calling. The Playstation 3 just doesn’t seem to be hot enough.

One of the biggest draws for me with the PS3 is the quiet operation. In comparison to the hurricane that is the Xbox 360, the PS3 is little more than a whisper when I’m playing a Blu-Ray or a game. Unfortunately, the Intercooler TS seems rather loud to me even at the lowest setting. This is when I was able to get it to even turn when forcing the machine to cook. The hum is definitely noticeable and annoying if you’re watching a “quieter” movie. It may not disturb you during Michael Bay explosions but probably will otherwise. 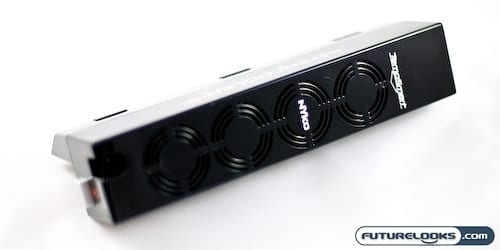 This product confuses me a little since I don’t think it is at all necessary. While the 360 has some serious heat issues that have resulted in an abnormal number of dead Xbox’s and RRoDs, the PS3 in my experience has been free of heat issues. In fact, I seldom turn my PS3 off even if it isn’t doing anything. To be honest, I think Nyko just thought that since they have one for the Xbox, they might as well sell one for the PS3. Granted, it is a huge cosmetic improvement over the original Intercooler which was not only huge, but somewhat ugly too.

The Nyko Intercooler TS for the Playstation 3 is decently solid and reasonably priced but I don’t see the point. It takes away one of the best things about the PS3, which is sub audible low noise levels in order to cool cool something that, frankly doesn’t want or needed to be cooled. Unless you keep your PS3 in one of those insulated bags they use to keep pizzas warm, I honestly doubt you’re experiencing any heat issues with the already cool running machine. If you are, take it out of this proverbial thermal bag and put it somewhere that gets some airflow, I can’t see the PS3 becoming hot anytime soon. Maybe individuals in much more tropical climates may get some better use out of it.

If you happen to feel like your PS3 is overheating and you don’t mind the additional noise, give the Intercooler TS a try. I guess it could help you out in extreme circumstances like if you lived in a volcano. Otherwise, pass on it and save that $25 for Resident Evil 5.