We’ve used the following system several times in previous tests which has proven to be a hot beast in overclocked situations. If any CPU cooler can keep the 6-core Intel Core i7-980X cool, it’ll cool anything currently available.

Here’s what we used to build it:

The NH-C14 has a mounting system like the NH-D14. Noctua’s SecureFirm2 is arguably one of the most secure mounting methods given the weight of these coolers. Noctua includes everything needed right down to the Philips screwdriver for tightening the retention screws. It is even specially designed to make the task very easy. Adding to the plus side, it comes with a well illustrated manual which should provide seasoned vets and beginners with all the info they need for a successful installation.

We found it very easy to configure the fans so that air blows up and out the top if you have side mounted radiators or have other hardware that can benefit from a redirection of the air. And, the bottom fan can be omitted if you have very tall memory heat sinks. The top fan can be omitted as well if you happen to have limited case depth. This is a truly versatile cooler. 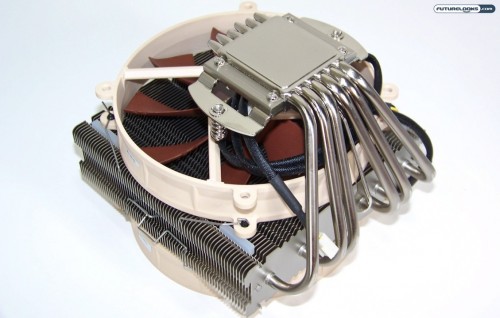 We’ll be using OCCT which is an artificial program good for fully loading all the CPU cores. First, we allowed the cooler to “burn in” the day before which settles the Arctic Silver 5 thermal paste which is the same paste used on all our previous tests. The reason is that there’s not enough Noctua NH-N1 thermal paste to go around for repeated testing. Stock and overclocked CPU frequencies were selected to push the cooler’s thermal properties. Temps were recorded after idling for 2 hours. Temps were then recorded with the CPU at full load. The cooler was tested with both fans installed at full speed and at low fan speeds. 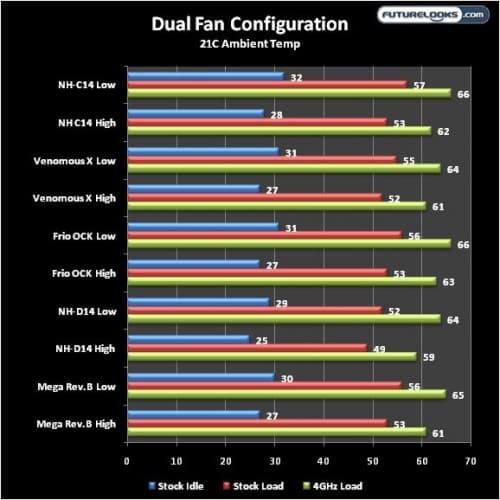 In spite of a rather dry, 21C room, the NH-C14 easily manages the temperatures, and very efficiently. The 140mm fans were also quiet and produced a very faint, yet inoffensive hum at full speed. In fact, the chances are very high that your video card will be louder. Of course, there is just no way anything we have in the labs is better than its big brother the NH-D14. But for a horizontal cooler, the NH-C14 does very well.

Since the cooler’s fans face can be oriented to face downward, cool air will naturally hit the motherboard and surrounding components in close proximity. Just how many components will depend on your particular case. Since, the DangerDen Torture Rack has two levels, the cool air hit just the motherboard. Here are the results. 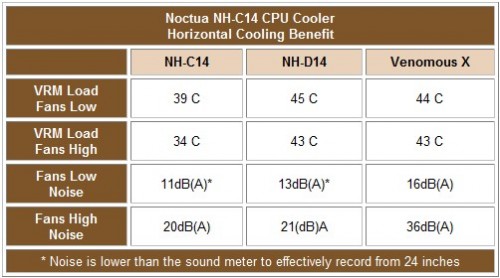 As far as temps go, everyone knows that INTEL X58 motherboards can get pretty darn hot at full load. The NH-C14 dropped the surrounding sensor temps at both low and high speeds. The tower coolers just don’t quite get the air where needed. That’s a very noticeable drop in temps and means it could help stabilize a potential overclocking load. If nothing else, it’ll bring down those operating temps which means that connected components won’t suffer from heat transfer either. 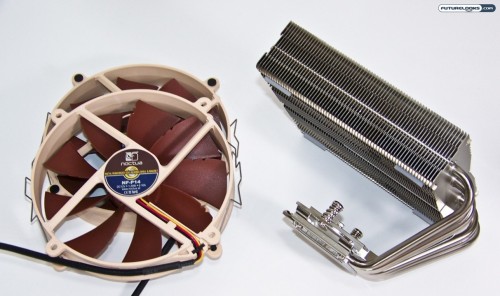 Standard horizontal CPU coolers aren’t always the most efficient. Especially if it’s a stock retail AMD or Intel cooler: they are mainly built to do the job as cheap as possible. They’re typically too small and sit too close to the board to actually do anything other than cool the CPU. Poorly one might add. While the possibilities of this feature were once taken for granted, designs like the Noctua NH-C14 completely correct any short comings. As hexa-core and higher processors threaten to heat things up inside your case, I predict the NH-C14’s design will be sought after by the millions of future PC owners who want to keep their original computer case while helping cool more than just the CPU.

Compared to the competition, our testing places the NH-C14 performance near the NH-D14, and overall better than its smaller NH-D12 sibling. That means that it’s extremely similar to the Thermalright Venomous X and Megahalems Rev.B coolers which are very popular among enthusiasts. But, it’s the horizontal design adding an added additional cooling benefits to the motherboard’s components.  The high quality also makes the  NH-C14 very much their equals.

At $89.99 USD, the Noctua NH-C14 may not seem like the most affordable CPU cooler. However, it’s priced very similar to the competition which sometimes do not come with dual fans like the Venomous X. Or fans at all. The cooler’s high quality materials, lifetime socket support, and performance are what your hard earned money buy. This is easily the best horizontal CPU cooler in North America if not the world and easily earns our highest honor: Futurelooks’ Editors’ Choice Award.

Help Us Improve Our Reviews By Leaving a Comment!