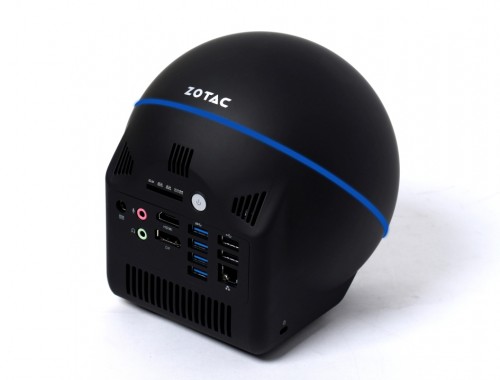 ZOTAC is one of the leading brands when it comes to mini PCs and this year want to shake things up a bit. In addition to hardware upgrades, the latest model sports an all new design. It is a little larger than previous Zboxes, but the Zbox Sphere OI520 has its own charms.

The Zbox Sphere’s unique and eye-catching design allows for some interesting ways to improve performance. First, the 1.6 GHz dual-core Intel Core i5 4200U with a turbo speed of 2.6 GHz is possible thanks to better cooling. This gives the Sphere a low power design with some serious horsepower when needed. It also comes with a slot for a 2.5 internal drive and a mSATA SSD to take advantage of the Intel Smart Response Technology to improve load-times and responsiveness.

ZOTAC also kept all the usual bonuses such as four USB 3.0 ports, Bluetooth 4.0, 802.11ac Wi-Fi, up to 16 GB of DDR3L RAM, and DisplayPort output. The new design looks like ZOTAC decapitated the robot from Hitchhiker’s Guide to the Galaxy. This is especially awesome for me because I have never liked that book.

May 21, 2014 – ZOTAC International, a global innovator and manufacturer of graphics cards, mainboards and mini-PCs, today unveils the first ZBOX Sphere to let users express their individuality through computing. The new ZOTAC ZBOX Sphere OI520 series combines a unique orb form factor with a powerful 4 th Generation Intel Core i5 processor for computing with a touch of individuality.

“ZOTAC is expanding the ZBOX lineup to go beyond the traditional square form factor and the ZBOX Sphere is our first design concept that we’re putting into production,” said Carsten Berger, senior director, ZOTAC International. “The new ZBOX Sphere form factor is also one of our easiest to customize too, the top twists off for tool-less upgrades.”

Inside the ZOTAC ZBOX Sphere OI520 series is a high-performance 4 th Generation Intel Core i5 4200U processor with Intel HD Graphics 4400 for an excellent computing experience rich in high-definition content and snappy multi-tasking responsiveness.