I am fueled by caffeine and Wi-Fi. And as I type this with a cool Captain America coffee mug on my desk, I can’t help but wonder why my router has to be a generic and ugly black rectangular box, tucked away by my entertainment center in the other room. Netgear agrees. Wi-Fi should be elegant, it should be beautiful and it should be omnipresent. And, in some sense, that’s how the Netgear Orbi WiFi System was born.

Because this is more than just a router; it’s a WiFi system.

The Orbi kit consists of two main parts. You have the main router, which you’ll hook up to your ISP’s modem like how you always would, plus an Orbi satellite. Combined, they form a tri-band WiFi mesh network to “easily” cover up to 4,000 square feet in wireless Internet access. Both the router and the satellite come with a set of four Gigabit Ethernet ports to handle all your wired devices too. 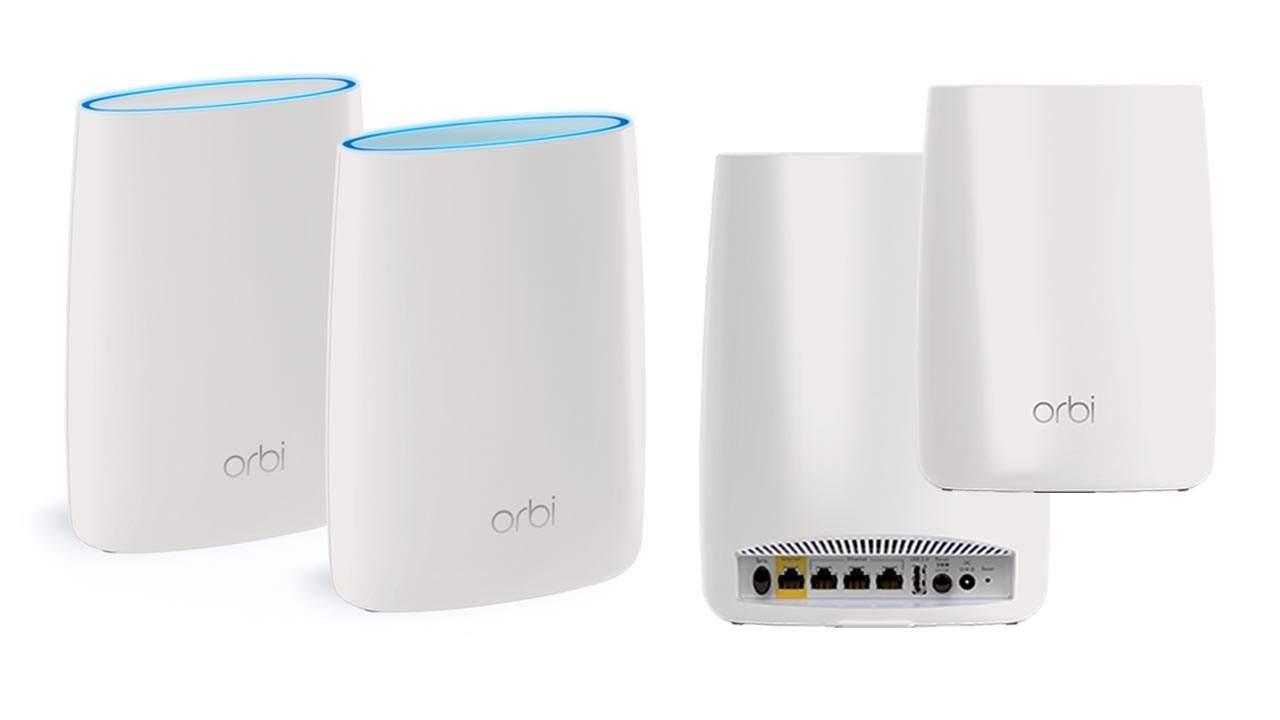 What’s important to note here is that the tri-band WiFi allows for a “virtual wire” that will deliver maximum speeds no matter how many devices connect to it. And the dedicated wireless channel between the Orbi router and satellite mean you won’t get any interruptions too. Buffering and dead zones become problems of the past.

Find more information on the pre-order page and in the full press release below. The Orbi WiFi System from Netgear will retail for $399.99 when it ships worldwide next month. 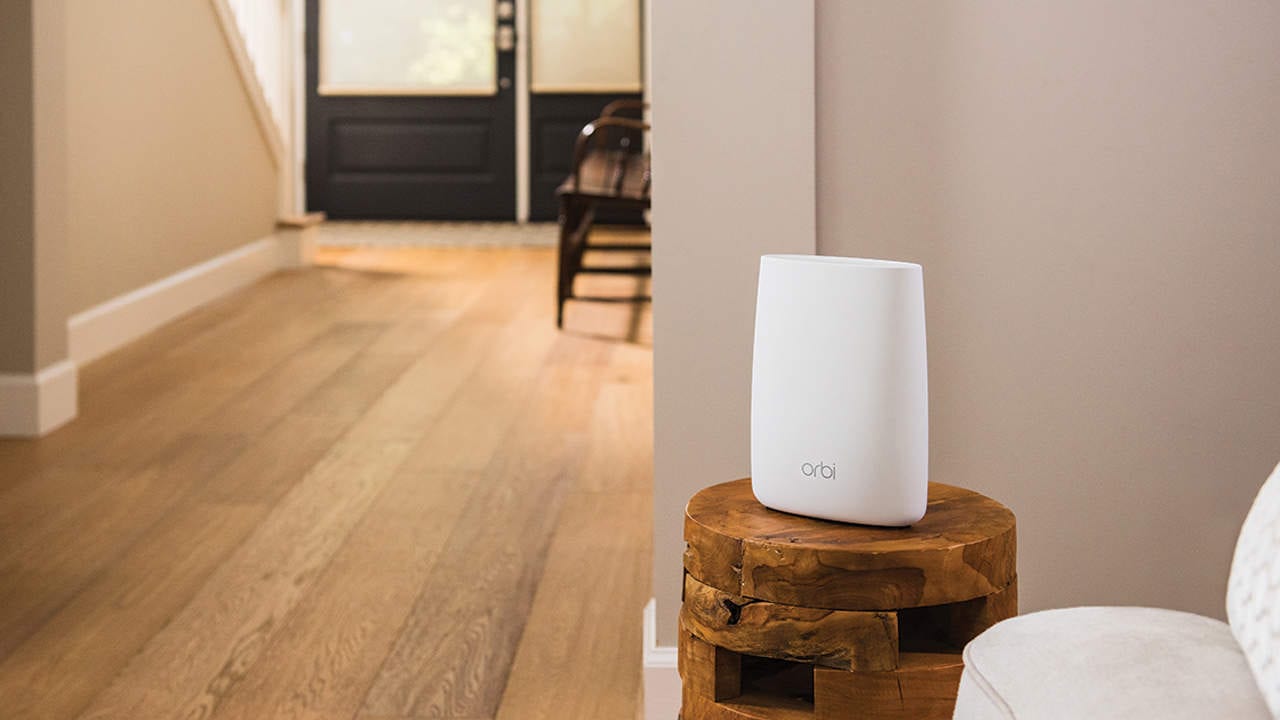 Another Industry First, Netgear Introduces Innovative Tri-band Technology to Deliver Fast WiFi Throughout Every Inch of Your Home

SAN JOSE, Calif. — August 22, 2016 — NETGEAR®, Inc. (NASDAQ: NTGR), the leading provider of home networking that powers today’s smart home, is delivering a whole new way to experience WiFi with the Tri-band mesh network of the Orbi™ WiFi System, the easiest way to enjoy high-speed WiFi throughout your entire home, including the patio, by the pool, up in the attic and even down in the basement.

Orbi enables high-speed WiFi to be accessible throughout your home and property, eliminating dead zones. An industry first, Orbi by Netgear is the only system to leverage Tri-band WiFi, which has the unique capability of providing a dedicated wireless channel between the Orbi router and each Orbi satellite. Tri-band WiFi is similar to a virtual wire, delivering maximum speeds no matter how many devices connect. This dedicated wireless connection ensures far-reaching coverage, empowering you to enjoy uninterrupted WiFi connections with the fastest internet speeds that you are paying your service provider for.

RBR50_Lifestyle_Livingroom “The connected home has become more data hungry than ever, and video consumption is the primary driver,” says Brett Sappington, senior director of research, Parks Associates. “Consumers are streaming video to every available screen from an increasing number of OTT video service options. In the U.S. market, the average broadband household has over seven connected CE devices that can stream video. In addition, emerging smart home devices require always-on connectivity to function properly. Consumers have come to expect ubiquitous, high-speed connections throughout the home and rely on Wi-Fi for the in-home connectivity and bandwidth that they need.”

The installation of Orbi is designed with simplicity in mind and is completed with a few clicks from any mobile device or browser. Intended to act as a full-featured router, Orbi can plug into your gateway or modem. If you would like to upgrade the WiFi on your service provider gateway, simply plug Orbi into your existing gateway and enjoy.

The Orbi Kit includes two devices, a router and a satellite, that are pre-paired together for an easy out-of-the-box set-up. There is no need to guess the proper placement of the satellite nor is there a need to locate it within line-of-sight of the router. Simply connect the Orbi router to your internet modem or service provider gateway, and place the Orbi satellite in a location that is in the center of the home. Within minutes, you’ll have a single, secure, high-performance WiFi network all under one network name.

“In designing Orbi, Netgear has applied lessons learned from two decades of home WiFi innovation to address the current network challenges of architectural design, dense building materials and large square footage,” said David Henry, senior vice president of home networking devices for Netgear. “Additionally, today’s home networks are now expected to support more devices all of which are competing for your bandwidth. So, the emphasis should not only be on WiFi coverage itself, but also the performance at the furthest edge of that connection. For example, imagine the ability to stream your latest video binge in HD from poolside or streaming music over WiFi to the basement.

“The strength of Orbi lies in its Tri-band WiFi, which enables you to enjoy the same level of connectivity throughout the entire home. Netgear Orbi delivers more high-speed WiFi connections to more devices through this new advanced WiFi technology that connects automatically and simultaneously to every WiFi-enabled device in the home.”

The Tri-band WiFi that powers Orbi includes a dedicated 1.7Gbps 5GHz band solely for extending internet speeds to Orbi satellites. This enables the other two WiFi bands to be fully dedicated bands for all connected devices across an entire home. Tri-band WiFi ensures that Orbi WiFi System provides both reliable WiFi coverage and maximum internet speed throughout your home.

An Orbi WiFi System with router and satellite can easily cover an area up to 4,000 square feet of a typical home, which addresses the large majority of U.S. homes today. Within the calendar year, Netgear will be offering kits with more satellites for larger homes and will also make satellites available as add-ons for the Orbi System. With the introduction of Orbi, roaming from room to room, floor to attic, and even the basement to the yard can now be done with consistent, uninterrupted access to the fastest WiFi speeds available. Forget video buffering and eliminate dead zones to enter a world where you can enjoy pure, seamless high-speed connectivity.

NETGEAR Orbi WiFi System with one WiFi router and one satellite will be available worldwide this September from major retailers at an MSRP of $399.99 in the U.S.

NETGEAR (NASDAQ: NTGR) is a global networking company that delivers innovative products to consumers, businesses and service providers. The Company’s products are built on a variety of proven technologies such as wireless (WiFi and LTE), Ethernet and powerline, with a focus on reliability and ease-of-use. The product line consists of wired and wireless devices that enable networking, broadband access and network connectivity. These products are available in multiple configurations to address the needs of the end-users in each geographic region in which the Company’s products are sold. NETGEAR products are sold in approximately 28,000 retail locations around the globe, and through approximately 31,000 value-added resellers, as well as multiple major cable, mobile and wireline service providers around the world. The company’s headquarters are in San Jose, Calif., with additional offices in approximately 25 countries. More information is available from the NETGEAR investor page or by calling (408) 907-8000. Connect with NETGEAR on Twitter and Facebook.