One of the benchmarking utilities that can put the CPU through its paces is Cinebench, and I was curious how the MSI GS75 Stealth 8SE with its Intel i7-8750H would handle rendering the image, but I think it didn’t do that bad of a job. 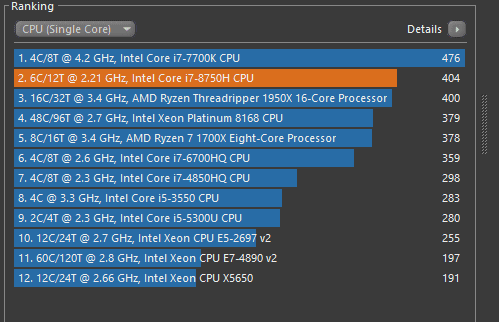 When I look at the single-core score, it is almost an even match with the single-core performance of the AMD Ryzen Threadripper and nudged out the Intel Xeon, though the previous 7th generation i7 nudges out this i7-8750H. 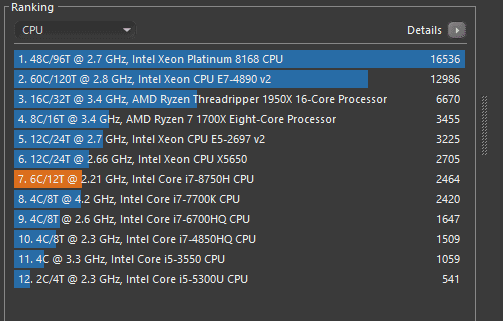 When Cinebench accesses all cores/threads, the big CPUs, AMD Threadripper and Intel Xeon, of course, blow the other CPUs out of the water. It is nice to see that the 8th generation Intel i7 does beat out the previous generations when you make use of the additional cores and threads, as one would hopefully expect to see. Granted, the AMD Ryzen, with its eight cores and 16 threads, of course, can outdo a six-core, 12 thread CPU. It would be interesting to see how the Intel i9 stacks up against the AMD Ryzen 3rd generation CPUs. Perhaps that could be a future review?

The MSI GS75 Stealth 8SE comes with a Samsung 512GB NVMe SSD. So as any good reviewer, I did a quick read/write test to see how well the single NVMe SSD performs. 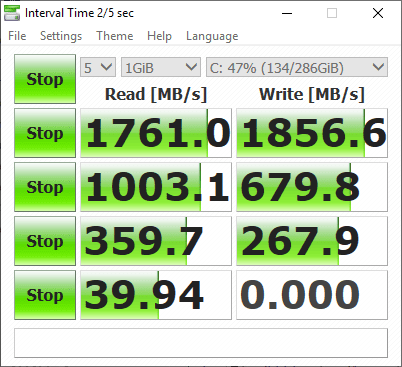 It may not perform to that of a PCIe 4.0 NVME (as it is not a PCIe 4.0 NVMe SSD), but it can handle an excellent sequential read of 17561 MBps, and a write of 1856 MBps. When you are running NVMe, I would expect that the read and write speeds were relatively similar. These speeds show that the Samsung NVMe SSD is pushing the PCIe 3.0 limit; if you wanted any faster, you would have to opt for a PCIe 4.0 NVMe with available PCIe 4.0 bandwidth, which the MSI GS75 Stealth does not have.

The MSI GS75 Stealth 8SE does have a second NVMe slot that you could utilize a 2nd SSD and RAID them for better performance if you so desired. 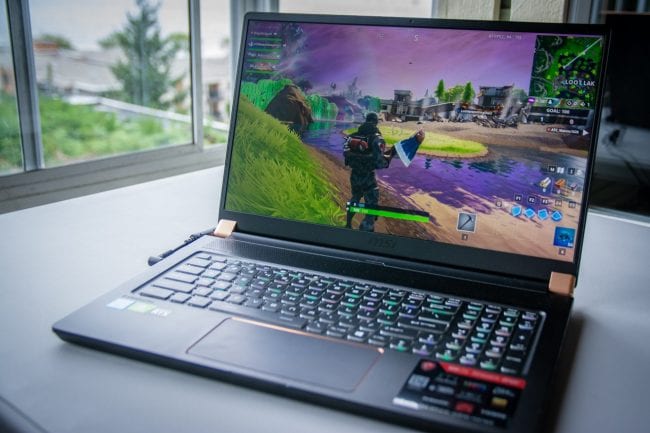 If you are looking for an ultra-portable gaming laptop and want to save a few dollars, then the MSI GS75 Stealth 8SE is a great option. The thin design allows it to slide into and out of your backpack, without weighing you down too much. If this 17-inch version is too big for you, there is a 15-inch version of the GS65 Stealth.

I enjoyed how thin the MSI GS75 Stealth 8SE  is compared to other gaming laptops. The slim bezel and IPS screen delivered a most excellent gaming experience. The build-in RTX 2060 worked as expected with what I able to throw at it in terms of games. This machine will last a while in terms of being able to handle new PC titles as they are released. You will want to ensure you don’t play games with this on your lap, though, as it does get quite hot. When placed on a flat surface, there seems to be enough air space underneath to move the hot air away, and you could utilize a laptop cooler to help offset the heat it pushes out as well.